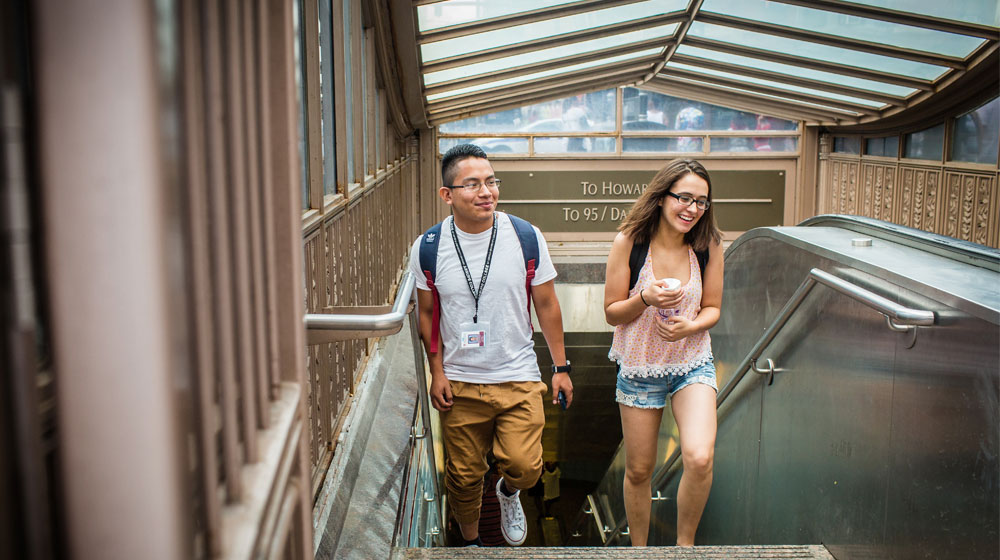 During his senior year of high school, Osmar Cruz took a weekend job working 12-hour shifts at a restaurant about an hour from his home on Chicago’s South Side. After leaving school at 3 p.m. on Fridays, Cruz would make a brief stop back home before rushing off to start work at 6. By the time his shift ended the next morning, he’d gone 24 hours without sleep. At 6 p.m. that night he’d be back at the restaurant, ready to do it all over again.

The job was exhausting. Cruz was already working four nights a week at a martial arts school, cleaning up after practice in exchange for free lessons. The schedule started to take its toll and Cruz struggled to keep up with his studies. “Sometimes I couldn’t fall asleep,” he says. “I couldn’t concentrate. I was losing it.”

When he took the job, Cruz was unsure of where he’d be after high school. He worried that a college education would be too expensive and may not be an option. But as the long hours wore on him, Cruz recalls getting some valuable advice from a coworker: If you don’t want to keep doing this kind of work, you have to get an education.

Cruz knew that meant more than earning a high school diploma. He quit his restaurant job and shifted his focus to applying for college, looking to Chicago’s city colleges as his most affordable choices. But his prospects still seemed bleak. Cruz says he knew the schools he was applying to didn’t have the best academic reputations, nor the highest graduation rates. In fact, the National Student Clearinghouse Research Center finds only 39 percent of students who enter two-year community colleges graduate within six years.

And there was still the issue of cost. Though community college is generally more affordable than a four-year university, the Institute for College Access & Success reports that the average cost to full-time students is still $15,000. Only 2 percent of students have their financial need met by grants, and for Cruz, the only guarantee he would get from attending a city college was a heavy load of student loan debt.

Things changed when a teacher at Cruz’s high school told him about Arrupe College, Loyola’s new two-year school. Designed for students like Cruz, Arrupe strives to make a high-quality Jesuit education accessible to students with limited financial resources. With the aid of grants and scholarships, Arrupe gives students an opportunity to earn an associate’s degree and to graduate with little or no debt.

Cruz applied and was admitted, making him one of nearly 160 students to enter Arrupe’s first freshman class in August 2015. Students attend either a morning or afternoon session four days a week—leaving the rest of their day open for work and studying—and complete their courses over five eight-week sessions throughout the year. Class sizes are small, students have more direct access to professors, and support staff are on hand to assist students. All of these ingredients are designed to pave the road to success for Arrupe students.

Blanca Rodriguez’s eyes widen with excitement when she talks about the opportunities Arrupe has given her. The oldest child of Mexican immigrants, Rodriguez has dreamed of going to college since she was in seventh grade. She knows the kind of sacrifices her parents made in leaving behind their home and family, all in the hope of making a better life for their children. That inspired Rodriguez, pushing her to work hard so that she can give back to her parents and set a good example for her two younger brothers.

“It has always been in my head that I have to go to college in order to be successful,” she says. “It has never really been a choice for me. It has been something I had to do.”

Rodriguez was dejected upon realizing that a four-year university would be financially out of reach. She had hoped to pay her own way through college rather than putting an additional financial burden on her parents. Like Cruz, she considered city colleges but was unimpressed with the offerings. Then she discovered Arrupe.

“I’ve always prayed to go to a good school and to have a good education,” says Rodriguez. “This school was an obvious sign that God listens to my prayers.”

Rodriguez was accepted, and through a package of financial aid and scholarships she will graduate debt free. She realizes what a unique opportunity that is and says it is an added motivation. Thus far, her hard work is paying off. In the first eight-week session, she was among a select few students to make the Dean’s List. She hopes to attend Loyola to complete her bachelor’s degree, and if she keeps her grades up she knows she can qualify for automatic admission—and more importantly, for a merit-based scholarship.

Arrupe also helped Rodriguez find a part-time job at a bank, where she works four days a week. She says the job has boosted her confidence and improved her organizational skills. The money she earns helps her contribute to the family’s bills and to buy groceries, which allows her father to reduce his overtime hours at work. For Rodriguez, it is a small way of showing her gratitude.

That desire to serve others is something Rodriguez sees reflected in Arrupe’s Jesuit mission. “Here we talk about how we need to be men and women for others. If I went to a community college, I feel like everybody would just be focusing on themselves,” she says.

Rodriguez believes Arrupe is indeed preparing her to be a “woman for others.” She wants to study psychology, with the goal of one day working with children who have mental disabilities. “I am not working for my own success,” she says. “I am working for the success of my parents because they had to struggle to come here. And I am working for the success of people that I want to help in the future to better their lives. I am not focusing on my own goals, I am focusing on how to better the lives of other people.”

When Arrupe’s morning classes let out, Osmar Cruz finds himself a quiet spot to study on campus. It’s a brief respite in an otherwise busy schedule. He still spends his evenings at the martial arts school, but he’s traded in his cleaning duties for teaching, leading classes for children age 12 and ages 4 to 6. Then he tries to fit in a little more schoolwork before getting to bed.

Cruz admits it is hard work, but feels those long hours at the restaurant and his martial arts training helped to mentally prepare him. “I always tell myself that nothing is ever too much,” he says. “It is not an obstacle. It is a challenge.”

Cruz hopes to continue his studies at Loyola, with his sights set on not only a bachelor’s degree but a PhD as well. He enjoys teaching and wants to someday be a college professor. Yet he knows none of it would be possible without Arrupe allowing him to take the first step. “I am very proud to be an Arrupe student,” he says. “I am thankful for everybody who supported the making of this college, because now there is one more person in this world who has an opportunity.”