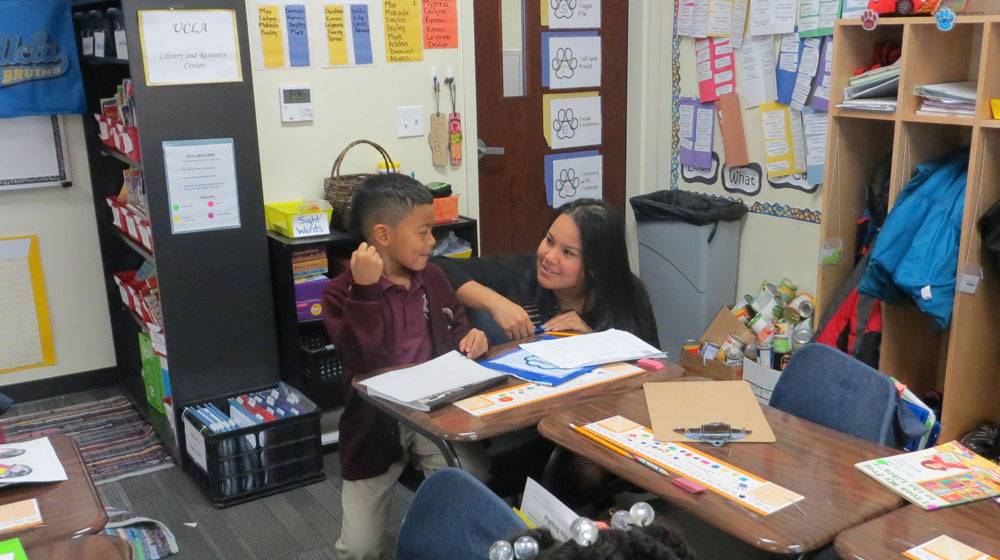 The halls of Tindley Renaissance Academy beam with college pride. Pennants representing colleges around the country hang from the ceiling of the urban Indianapolis school, and each classroom bears the name of a prestigious university. A large sign greets the students—or young scholars, as Tindley calls them—each day with a reminder of the school’s motto: “College starts here.” Nearly every aspect of the school day is focused on college preparation—even though the students are still in elementary school.

Tindley principal Clarisse Mendoza (JFRC Spring ’05, BA ’06) acknowledges that the college-centered mission is unusual for a school that only includes kindergarten through fourth grade. But a decade working in urban education, both in the classroom and at a district level, has shown Mendoza that more traditional structures aren’t succeeding when it comes to preparing students from underserved communities for higher education. She recalls working as a high school English teacher in Washington, DC and encountering students who weren’t even able to read by the time they reached ninth grade.

“I would always wonder, how did it get so bad? How did these young people keep getting passed from grade to grade without really having mastered these foundational skills?” The answer, she says, was that an emphasis on college readiness needed to begin at an earlier grade level. “If we really are going to ensure that our scholars someday walk across that stage not just with their high school diploma but with their college degree,” Mendoza says, “we have to ensure that they have the strongest start to school possible.”

That means providing the students a rigorous curriculum to help them build a solid academic foundation. The Tindley model also emphasizes goal setting and helping students envision themselves one day being in college, developing what they call a collegiate scholar identity.

That mission struck a chord with Mendoza, who left a job with the UNO Charter School Network in her hometown of Chicago to become Tindley’s principal in 2014. The work, she says, can be incredibly challenging. The school is located in The Meadows, a low-income, high-crime neighborhood on Indianapolis’s northeast side. Most students come to Tindley with little or no concept of college. Mendoza puts in long hours and helps with tutoring students on the weekends. “It is not even work,” she says. “It is a lifestyle.”

But Mendoza understands how vital her role is in helping young people in her community succeed. A 2011 study published in the American Sociological Review found that children who grow up in low-income neighborhoods have a significantly reduced likelihood of graduating high school. And according to 2013 data, only 9 percent of individuals from families in the bottom quarter of the income bracket graduate college by age 24—compared to 77 percent among top income earners.

Mendoza isn’t deterred by these statistics. If anything, such realities motivate her to find new ways to make college a realistic goal for her students. And what better way to make college seem more real, she thought, than having students visit an actual university campus?

Like everything about Tindley, the idea was unconventional. Most colleges Mendoza contacted weren’t prepared to host such a young class of visitors. But she turned to her alma mater and found a welcoming group of hosts in students from Loyola’s Black Cultural Center. Mendoza saw this as a perfect opportunity for her students, most of whom are African-American, to meet college students who could serve as positive role models.

Though some of her colleagues scoffed at the idea of taking 78 fourth-graders on an overnight, out-of-state trip, Mendoza was determined to make it a reality. The students organized bake sales, dances, and other fundraisers to help cover the cost. They prepared questions on a variety of subjects—from campus life and choosing a major to being a minority student and living away from home—that they hoped to ask the Loyola students.

But the actual day of the visit far exceeded anything the young students imagined. They were in awe as Mendoza took them around the Lake Shore Campus, showing them buildings where she had taken classes and where she lived. When they came together at the end of the day to reflect on the trip, one student raised her hand to share what the day had meant for her.

“Ms. Mendoza, I didn’t know what college was like,” the student said. “I couldn’t imagine it. But now that we’re here, I can definitely see myself being here. I can do this.”

Those words gave Mendoza goosebumps. It was a confirmation that her outside-the-box idea had exactly the effect she intended: It was a transformational moment that showed the students college was not outside their grasp. “When she said that,” Mendoza says of the student’s reaction, “I knew we did the right thing.”

Mendoza’s voice races with excitement as she recounts the experience of taking her students to visit Loyola, which she plans to make an annual tradition. It is days like these, when students visibly gain confidence in themselves, that keep her going.

Though challenges remain, Mendoza is always amazed at the resilience and dedication of her students. She truly believes that they have the ability to succeed in college and beyond. “It is really hard, but it is worth it to be a part of that growth and to contribute to our future,” she says.

“People say at the end of the day it is just a job,” Mendoza says. “But in keeping with my Jesuit upbringing, this is my calling. This is my vocation. And I couldn’t imagine myself doing anything else.”