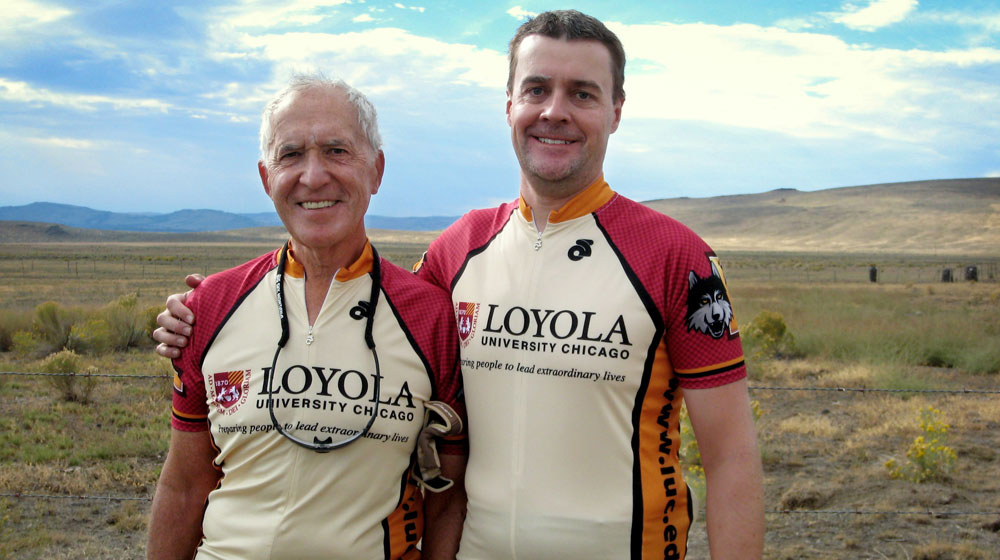 Charles Lafkas (BS ’94) used to marvel at how much attention he got when he would wear a cycling jersey from his father’s alma mater. So Lafkas, a Cincinnati-based clinical project manager in drug development and an avid bicyclist, decided to create a Loyola version to showcase his own alma mater. He kept the project a secret from his father, Robert, until the two went on a planned cycling trip in 2013—which provided the perfect opportunity for the younger Lafkas to surprise his dad with his very own Loyola jersey.

A unique project
Lafkas enlisted a little help to make his idea a reality. “I was introduced to a local designer, Diana Puppin of dp Design, who’s also a bicyclist," he says. "With Loyola’s blessing to commence the project, followed by the University’s continued input and final approval, we created the jersey.”

The jersey proved to be a hit not just with Lafkas’s father but with other cyclists as well. “We were in eastern Oregon for a week with 2,000 other people who had come from all over the world. So I gave my father this Loyola bicycle jersey, and he was absolutely stunned," says Lafkas.

"We were with another friend, whom I gave a jersey to also, and about half a mile out of our camp that morning, while riding someone yelled to my father, ‘Hey, Jesuit!’ He rode up to my father and named all the members of the ’63 Loyola championship basketball team. All three of us that day each received half a dozen comments, all positive.”

Service through science
Lafkas, a biology major during his time at Loyola, manages drug trials for pharmaceutical companies as they’re working toward FDA approval, ensuring that the trials are done ethically and objectively. “I take as much pride in the drugs that we’ve been able to help get to market as the ones we’ve been able to help kill, knowing that they shouldn’t get any further than they did. It’s about protecting the rights and welfare of the people who are participating in these trials.”

Giving back
As part of Loyola’s Access to Excellence: The Campaign for Scholarships, Lafkas endowed a scholarship to provide financial assistance to one or more students, particularly those studying biology, physics, or chemistry.

“I’ve gotten to the point in my life where I’ve become financially successful enough that I can give back in this way," he says. "Because Loyola gave me a good start, I enjoy being able to help someone else attend Loyola, and hopefully they in turn will get off to as good a start as I did and take that experience out into the world.”