Head of the class 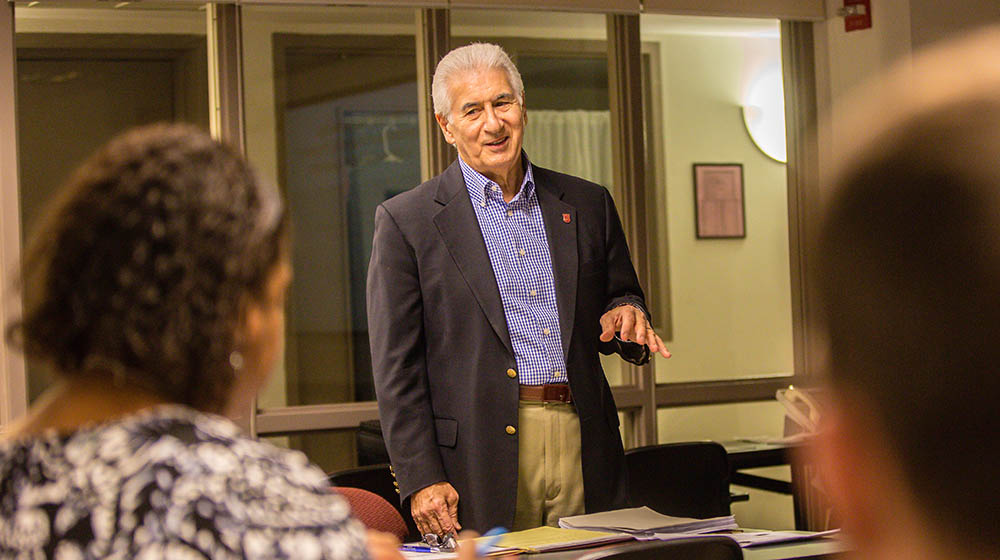 Harry Rossi (EdD '85) teaches a certification course in Lewis Towers on Loyola's Water Tower Campus. Rossi, who has devoted his career to education advocacy and supporting students, is a proud Rambler who continues to teach at Loyola's School of Education. (Photo: Heather Eidson)

Unraveling his maroon-and-gold Loyola Ramblers scarf, Harry Rossi (EdD '85) makes himself comfortable at one of the Schreiber Center lobby tables and whips out his newest-generation smartphone. The way he sauntered into the building—hair combed back, leather jacket unbuttoned, silver Aviators reflecting the bright overhead lights—Rossi immediately commands attention. But just a few minutes with him reveals this first impression to be deceiving.

When asked to talk about his life’s work, Rossi is quick to deflect the conversation away from himself.  After a few minutes briefly outlining his own education and career, Rossi—who in March received the 2017 American Association of School Administrators Distinguished Service Award—spent the next 20 minutes describing the love he has for his students and for the teachers who shaped his own path. His own high school teachers, he says, were his inspiration for a career in education and school administration. “Teachers saved my life,” he says.

Rossi had humble beginnings. He grew up in a rough neighborhood on Chicago’s West Side, where many of his peers didn’t do well in school or go on to college. Rossi excelled in academics and sports, but it was the encouragement of his teachers that determined his future. He remembers them saying he could do anything he wanted to do, and for Rossi, that meant making a difference in the lives of other young people.

Rossi has done just about anything he’s wanted to do; he’s held jobs across the educational spectrum from teacher to CEO of FED-ED, a group that advocates for more than 110 school districts and 500,000 students. He’s also taught Loyola students for more than 20 years as an adjunct professor in the School of Education, teaching one or two courses each semester for graduate students with similar dreams of student advocacy.

Earning the Distinguished Service Award, a national honor given to administrators who have made a major impact in the field of education through service and advocacy, is something Rossi takes in stride. It isn’t the first time he’s been honored for his work, or more accurately, the first time someone has attempted to honor him. He’s been nominated for many different awards but declined each time, not wanting to devote district resources to himself. What makes this award special, he says, is the fact that a former student took the time and put in the effort to nominate him.

Rossi’s passion for Jesuit education, and for helping students from low-income communities, has also made him a supporter of the Cristo Rey Network of high schools. “It’s a wonderful model of giving kids from inner city schools the opportunity to get a really good Jesuit education, work experience, and get them ready for college,” he says. Many of Rossi’s former students are now administrators for Cristo Rey. And along with his wife, Diane (EdD ’05), a fellow Loyola alumna and School of Education faculty member, Rossi helps to provide financial aid for Cristo Rey graduates to attend Loyola through the Harry and Diane Rossi Scholarship Fund.

These days, he’s starting to step back from his leadership positions to spend more time with his family, all of whom are lifelong Ramblers. His children, Phillip (BBA '00) and Elizabeth (BA '01), both received Presidential Scholarships to attend Loyola, and even his infant grandsons share in the Loyola legacy—Rossi beams with pride when he describes their Rambler onesies.

Though he has chosen to slow down a bit in recent years, Rossi isn’t likely to leave education advocacy behind anytime soon. He insists that as long as he’s in good health, it will always be part of his life.

“I’m not a person who just wants to sit in a rocking chair and move to Florida,” he says. “While I may step down from teaching, I will always be available to help my students.”