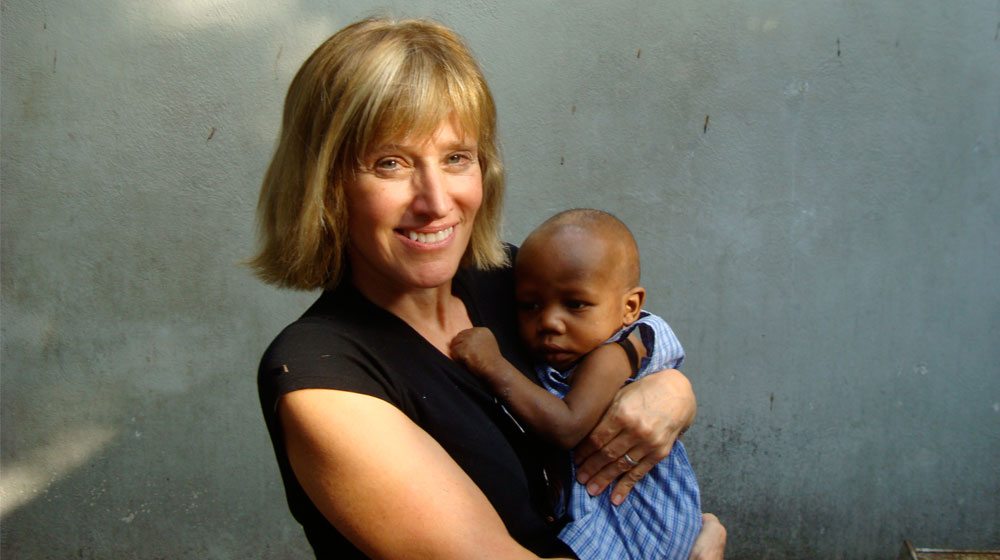 Marie Ginther (BBA '87) holds a child at the Abandoned Baby Unit of the Port-Au-Prince General Hospital in 2008, before the facility was destroyed by the 2010 earthquake. Below, Marie is pictured in 2012 with, from right, her husband, Ray; their sons Tommy and Matt; and Matt's fiance, Emily. (Photos courtesy of Ray Ginther)

Just four years after taking an early retirement at age 54 from her career as a corporate comptroller, Marie Ginther (BBA ’87) was diagnosed with early-onset Alzheimer’s in 2011. During those years between retirement and failing health, she committed herself to service projects in the neediest areas of Cairo, the Congo, Cuba, Ethiopia, Haiti, and Vietnam. Back home in New York City, she worked in a soup kitchen and as an end-of-life doula, comforting and advocating for the terminally ill.

Marie didn’t do these things because her time was limited; she couldn’t have known the cruel fate that awaited her. She lived this way, according to her husband Ray Ginther, because that’s just how she is—“a beautiful, giving person.”

The Ginthers both retired early. It was a decision that enabled them to travel extensively, including taking a cross-country bicycle trip, and to make a difference in many lives before Marie’s illness started taking its toll. “I tell people all the time, if you have a chance to do something, do it now,” says Ray. “You don’t know what the future will hold.”

Today, Ray speaks for Marie, who at 62 years old is in the late stages of her disease and living in a full-time care facility near the couple’s home. For those who love Marie, it’s difficult to accept that this independent woman who embraced life must now depend entirely on others. “It’s not fair. She had so much to give,” Ray says.

He says doctors tell him they’re increasingly seeing younger Alzheimer’s patients. “People need to be aware, because the implications are devastating.”

Marie’s story is a cautionary tale, a reminder to live, like she did, with urgency and purpose. She even took this approach in pursuing a college degree, which she started in her home state of Utah. That’s where she went on a blind date and met her future husband, who was working in publishing after graduating from Michigan State University. They married in 1975 and moved to Chicago three years later. Marie began working as a royalties accountant for Playboy and enrolled in night classes at Loyola.

When Ray had an opportunity to work in the home office of Condé Nast in New York City, Marie encouraged him to take the job. They made the move, but Marie was determined to continue her education—and to earn her accounting degree from Loyola.

She found a new accounting job in New York and wanted to continue taking night and weekend classes. Marie turned to an advisor from Loyola to help guide her through the process of choosing classes at New York schools that could be transferred to count toward her Loyola degree. “We’ve always been grateful to Loyola. The way Sandra (the advisor) looked out for Marie was everything to us,” Ray recalls.

Marie never gave up, balancing full-time work with the demands of college. Toward the end of her education, she was also pregnant with her first son, Matt. At three weeks old, he accompanied Marie and Ray back to Chicago for his mother’s graduation. It was 1987, and the Loyola journey that began nine years earlier was finally complete: Marie had earned her degree from Loyola’s School of Continuing and Professional Studies (SCPS).

Marie went on to have another son, Tommy, and a successful career. She retired as a principal from Renaissance Technologies LLC, an investment management company where she worked for 20 years.

Retirement provided Marie an opportunity to give back. She volunteered in the soup kitchen and at Mount Sinai Hospital. She served on the board of Good Shepherd Volunteers, which sends volunteers to social service ministries to help women and children affected by poverty, violence, and neglect in the US and abroad. She served on the board for HaitiChildren (formerly Mercy & Sharing), which provides healing, education, and hope to Haiti’s most vulnerable people. Marie and Ray made several trips to Haiti to see the results of the organization’s projects, and Ray continues to serve on the HaitiChildren board. Marie and Ray also traveled with Fix It Friends, a group that takes on annual projects.

Marie participated in several projects, including repairing apartments of single mothers in the Cairo slums, fixing up a school in Laos, and building a playground in Haiti. Ray is still involved and will be heading to Zambia with the group in January.

Ray believes that traveling intensified his and Marie’s desire to serve others. “When you travel, you see so much need. And you realize that you can’t fix the world, but you can fix a small part.”

In 2010, Marie received Loyola’s prestigious Damen Award for her leadership and service. She is now being honored again, as her husband has gifted $250,000 for the establishment of the Marie M. Ginther Endowed Scholarship at the SCPS. Loyola will match the endowment to create a $500,000 scholarship.

Ray says he and Marie know how difficult it can be to manage a job while struggling to get an education one or two classes at a time. It takes persistence and dedication, and it can be a financial challenge. But the SCPS makes it possible for students who are taking care of other responsibilities to complete their education.

“We would like to take some hardship away and help people realize their dream, because we realized our dream,” he says. “I’m proud of Marie, and I hope her story can inspire others. Loyola is a special place. This kind of thing is possible.”

Ray and Marie celebrated their 40th wedding anniversary in November. They were married Thanksgiving Day, which seems appropriate, given the gratitude that Ray expresses for his wife and their journey together. He says he wouldn’t change a thing. “It wasn’t that we set out to live an interesting life. It’s that we made ourselves available to let it happen.”