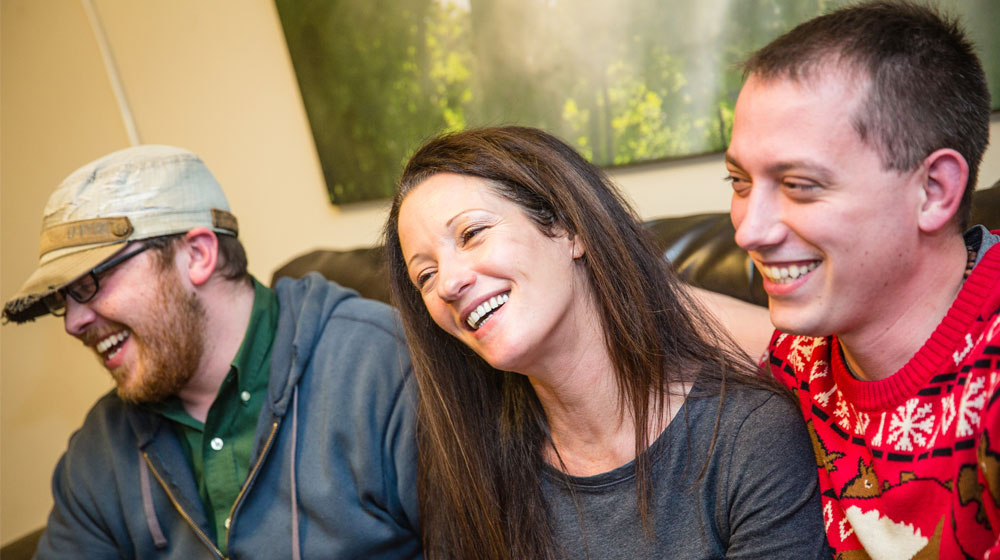 Renée Suzanne Frodin (BBA ’97) shares a laugh with sons Jon, right, and Dave. After her husband passed away, Frodin completed her degree while raising her four children and is now a successful entrepreneur. (Photos: Natalie Battaglia)

A college degree may have seemed out of reach for Renée Suzanne Frodin, but that didn’t stop her from trying

As a teenager, Renée Suzanne Frodin (BBA ’97) faced challenges that far exceeded the “normal” growing pains of her peers. She grew up in the south suburbs of Chicago in a poor family. During her high school years, she dropped out of school, got married, and started having children. By age 21, she and her husband had four young children with no prospects of building a solid future for their family.

Despite Frodin and her family living on food stamps, she eventually earned her GED. But she knew that would only carry her so far. “Everyone I knew who had a good life for their children and was successful was also educated,” says Frodin. “They had more than a GED, and they were able to make a better life for themselves and their children. Despite my circumstances, I wondered what I could do to make a better life for my kids, because that wasn’t how I envisioned them growing up.”

Frodin applied for grants and got into Prairie State College, a community college based in Chicago Heights. She worked hard and earned good grades. Again, she found herself wanting more. A student there told Frodin that Loyola University Chicago offered a Presidential Scholarship and encouraged Frodin to apply.

“At first I thought, ‘That’s the most ridiculous thing I’ve ever heard,’ ” says Frodin. “Why would a prestigious university like Loyola want anything to do with someone who got a GED, had a bunch of kids, and went to junior college? But I also thought, ‘What would it hurt to apply?’ ” So Frodin did apply, and one day a letter from Loyola arrived telling her that she had been accepted to the University—and awarded the scholarship.

“It was like the skies opened up,” she says. “I just couldn’t believe it. It was the best break I’ve ever gotten in my life. To go someplace like Loyola was unthinkable for a person like me who had the life that I had. Many people thought it was ridiculous that I even tried.” 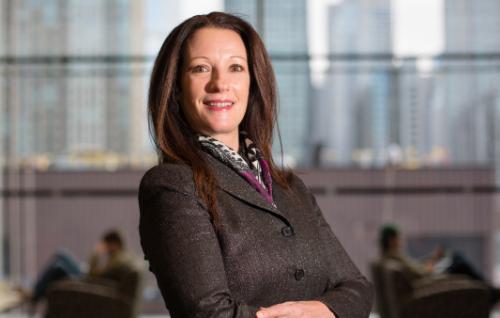 At the time, Frodin and her family lived in Richton Park, Illinois. She took the train to class every day, about an hour commute each way. Two of her children were in day care, and the other two were attending school.

“I was very tight with my schedule,” she says. “I’d wake up and get the kids off to school or day care, run to the train, take three classes in a row on Monday through Friday, pick up my kids, and go home. There wasn’t time for anything else.”

Frodin studied finance at the Quinlan School of Business. During her final year, and with only a semester left to earn her degree, Frodin’s husband passed away unexpectedly. Facing an even more uncertain future as a single mother of four children, Frodin feared she would lose her scholarship, because the Presidential Scholarship is only for full-time students.

“I couldn’t attend full time anymore after he passed, because I needed to get a job,” Frodin says. “But I still wanted to finish my degree, because I was so close. I wanted to graduate from Loyola and didn’t want to have to go someplace else.”

Frodin wrote a letter to the University asking if there was any way the scholarship could be continued so she could finish her final classes despite not being able to continue on full time.

“Loyola said yes, and I am forever grateful,” says Frodin. “Not only for myself but also for my four children. My kids needed me to finish that degree. I knew if I didn’t that nothing would change for us. I might still be on food stamps. I couldn’t bring my husband back, but I could graduate. It was the only way I could see for us to ever have a better life.”

Frodin is quick to point out the impact of that decision. “Loyola helped us all—five people, not just me,” she says. “All four of my kids have graduated from college. And I don’t know where we’d be if I hadn’t finished my degree.”

Frodin went on to a successful career in investment operations, accounting, and finance. As she established her career and could better provide for her family, she began donating money to Loyola, particularly in support of scholarships.

“I like to give back to the University any way I can,” Frodin says. “I always envision someone like me who wouldn’t be able to attend Loyola without some assistance, and I hope that he or she can graduate and have a better life because of their education and pay it forward.”

Frodin lost her job last June, and after 20 years in the corporate world she decided to pursue a coaching certification. Now she is working diligently to launch a new full-time business as a certified personal coach with a specialty of helping women who are frustrated with dating.

Frodin has always been passionate about improving one’s life and personal development and doing the best one can with what one has. She had been wanting to pursue a different career path for several years, so when she lost her job, she felt that was a good opportunity to follow this new calling and develop a career she felt strongly about.

“I am a big believer in lifelong education,” says Frodin. “Learning something difficult and not giving up really tests your mettle…"

“I had a pretty rough childhood, and the kindness that was extended to me by the University made me believe the world could be a good place and that good things could happen to good people,” says Frodin. “I am grateful for the opportunity to give back to Loyola, and I hope the University will continue to make the education it provides available to as many people as possible.”

Learn more about how to support current Loyola student scholarships