One day, one hope 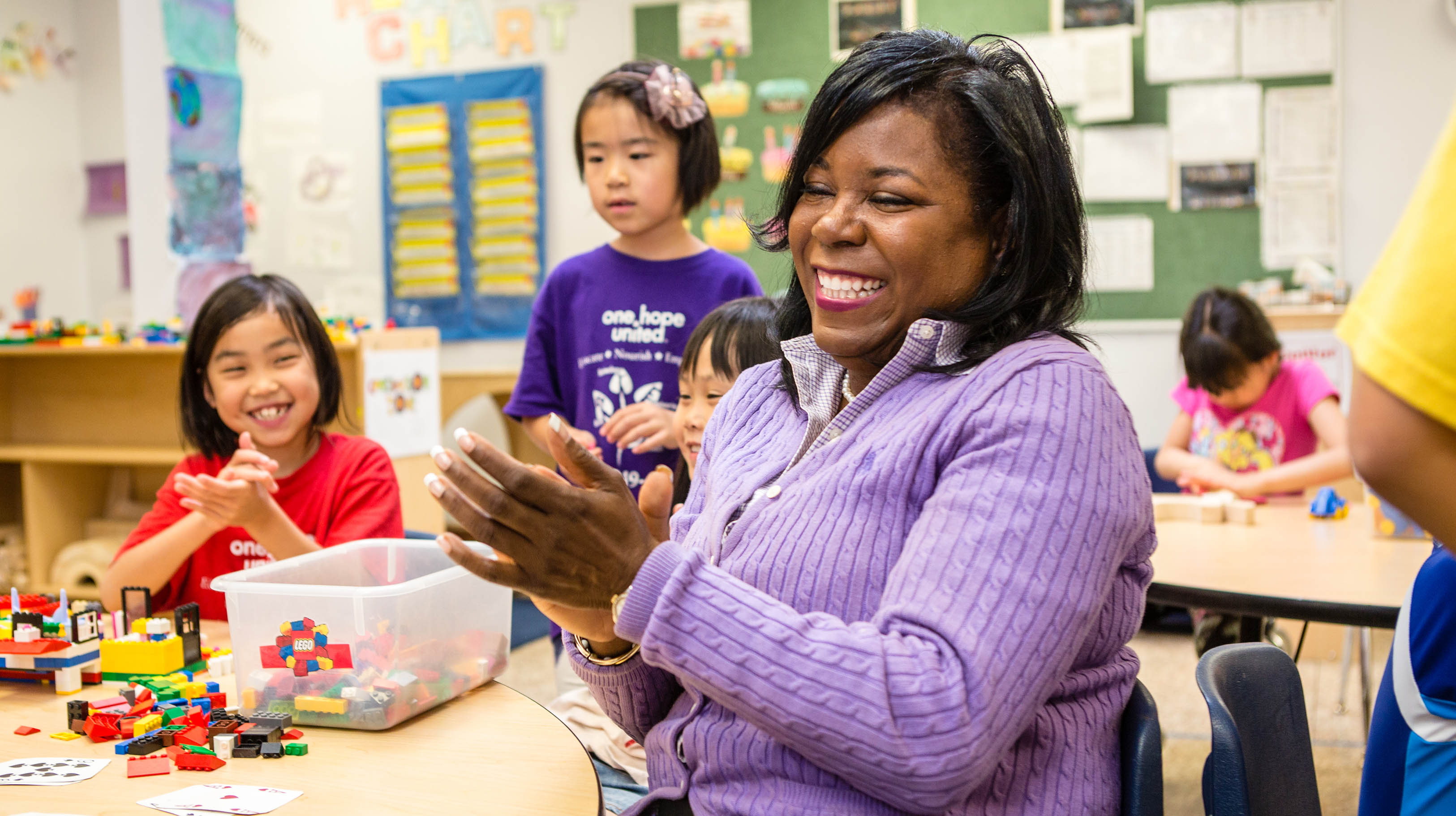 Theresa Dear (MUND ’90, MSIR ’99) survived the foster care system and eventually became the first African American chair of the board of One Hope United, a a community support organization that serves children and families. Above, Dear spends time in the classroom with students at One Hope United's Bridgeport location. (Photo: Heather Eidson)

A challenging childhood in the foster care system taught Theresa Dear (MUND ’90, MSIR ’99) that if you never give up, anything is possible

"You have two options: fight or flight.” That’s what Theresa Dear (MUND ’90, MSIR ’99) told herself when, at age 17, she decided to leave the foster care system and strike out on her own. After her mother’s death, Dear spent six years in foster care, living in nine different homes—years she says were characterized by abuse and neglect. She remembers one particularly traumatic incident when she was forced to sit at a table for four hours and eat macaroni and cheese, which she disliked to the point of getting sick. She was not allowed to leave the table until the meal was finished. If she got sick, she was spanked.

“To this day, I can’t stand to look at mac and cheese,” she says. “That childhood experience still haunts me.”

Through her pain and isolation, Dear kept repeating to herself a simple personal mantra: “one day.” One day, she’d own a nice dress. One day, people would stop teasing her. One day, she’d be a success. And when that day came, she was ready to make it happen.

A long road out

Dear got a part-time job as a telemarketer and a second job as a lockbox clerk at bank, making just enough to leave her foster home and move into a studio apartment. For four years, she lived in an empty, unfurnished apartment. She struggled to pay the rent and buy groceries. But she saved what she could, and she knew the ticket to a better life was getting a college degree.

When she was 10 years old, Dear would often accompany her aunt to her job as a housekeeper for a woman named Dina. During those weekly visits, Dina became the first person to suggest to Dear that she should—and could—pursue higher education. Had it not been for those weekly conversations, Dear says she’s not sure she would have even thought about college.

Those visits helped Dear make another important connection. On the commute from her 63rd Street home to Dina’s house in Skokie, Dear would pass the Loyola ‘L’ stop on the Red Line. When she was ready to apply to college, Loyola still stood out in her memory. A teacher had mentioned the possibility of scholarships to her, which Dear researched and applied for on her own. Building on the minor professional and academic successes she experienced over the years, Dear went from sleeping on a mattress on the floor to earning a 2-year scholarship to Loyola.

The hard work didn’t stop there. In her third year at Loyola, Dear worked overnight shifts at Loyola University Medical Center as a medical records coordinator while she earned her degree. Though she began her undergraduate career as a pre-med student, she was inspired to pursue human resources after taking several classes from a professor who, at that point, had been the only African American she knew with a PhD. “I thought, ‘if I could do half of what this man does, I’m going to be OK,’” she says.

Dear’s Loyola education was a springboard to finally reaching the “one day” she had dreamed of years earlier. After returning to Loyola to earn her master’s degree, Dear founded her own successful business, HR4Non-Profits, a human resources and training consulting firm with offices in six states. She’s helped shape policy and advocacy as a national board member for the NAACP for over 12 years, is an ordained minister in the AME church, and hosts her own weekly radio show. Last summer, Dear walked more than 500 miles with the NAACP on their 42-day march from Selma, Alabama, to Washington, DC.

Most recently, Dear was appointed the first-ever African-American chair of the board at One Hope United, a community support organization that offers early childhood education, crisis prevention and intervention, and community-based programs. The new role allows her to focus on her passion for child and family advocacy, as she raises awareness of One Hope’s mission of “life without limits” for children and families.

Dear was even able to work with former President Barack Obama and his wife, Michelle, back when Obama was a community organizer. She invited him to speak at her church, then assisted in his senatorial campaigns and both of his presidential campaigns. Coincidentally, the office Obama occupied when he ran for the U.S. Senate is the same office where Dear currently works. She reflects upon her connection with the Obamas as one of the most memorable experiences of her life. “I just think of how rich my life has been, when I could’ve been a statistic,” Dear says.

She’s also published two books: one about her personal journey, and the other about scripture that empowers women to succeed. Even so, there’s still one thing Dear dreams of: more hours in the day.