From refugee to Rambler 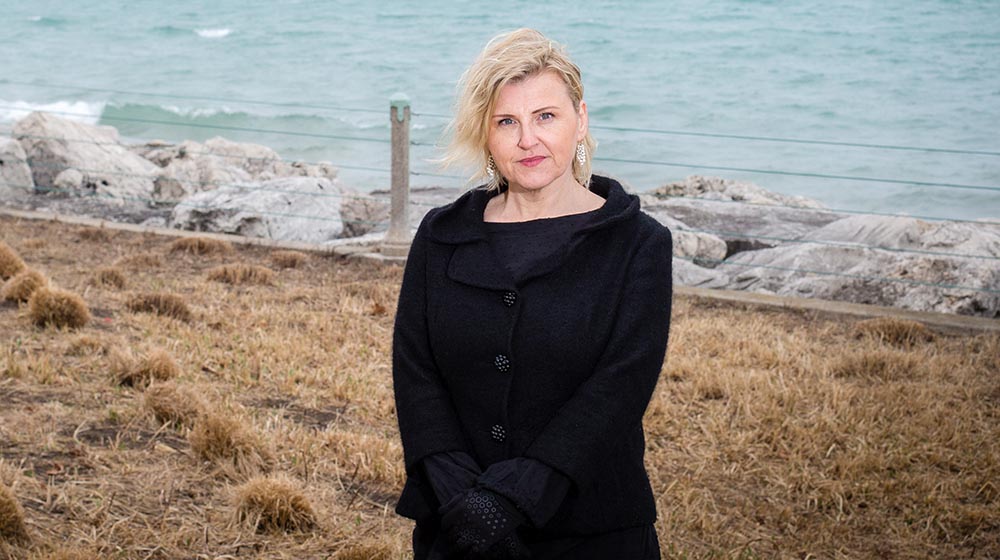 Alma Begicevic (BA '98) stands on the shore of Lake Michigan, where she first arrived as a refugee from Sarajevo in 1994. Now Begicevic has returned to the Lake Shore Campus to teach in the Department of Sociology. (Photo: Natalie Battaglia)

I survived the war in Bosnia, left behind my homeland, and started a new life in America. But that was only the beginning.

Walking onto Loyola’s Lake Shore Campus for the first time in 1995, I remember turning to my friend Tom, a member of a nearby Episcopal church who had been helping my family adjust to our new life in America, and saying, “I want to study here.” At the time I didn’t know much about the University besides the fact that it was close to where I lived. But the campus was calming, and I knew this is where I belonged.

I’d found myself in Chicago a year earlier as a refugee. Though I was young at the time, my experience of living in the center of the Bosnian War had left me feeling much older. Living in Sarajevo, I had studied fashion and majored in textile design, learned French, worked as a radio journalist, and survived the war. On February 5, 1994—only a month before we arrived in Chicago—my father was seriously injured in the Markale massacre when Serbs dropped mortars in the largest open marketplace in Sarajevo, killing almost 70 people and injuring 200. I was on an assignment that day when the television aired graphic images of the dismembered body parts.

When I found out my father was among the critically wounded, we had only a day to pack our things and leave the country. One of my father’s legs had already been amputated by French military doctors at the NATO base in Sarajevo, and the other was severely damaged by the mortar. Doctors explained to me in French that my father had suffered a terrible infection, his condition was critical, and he may not survive. His only chance was to leave the country to receive proper medical treatment. U.S. President Bill Clinton had ordered an emergency humanitarian intervention, and we were airlifted first to the closest military base in Europe, then to the United States.

A new beginning
Being a refugee means leaving home simply to stay alive. Such dislocation is not intentional nor is it planned. It is not driven by a rational choice to start a new life, the pursuit of happiness, or the American dream. It is not driven by a desire to obtain wealth, become successful, or get an education. In my case, the choice to leave home in the midst of war was motivated only by the desire to save my father’s life.

My mom was in shock, and she did not fully understand what was happening. My younger sister, an engineering student, was the only one of us who spoke English and could communicate on behalf of the family, but she was shy and wished to be left alone. My father was hospitalized, and his treatment would continue for many years. None of us had wanted to leave home, but we agreed that our only hope was to stick together.

Coming to Chicago meant feeling displaced, estranged, alienated; it was like being asked to play a role in a movie without ever being given the script. In Sarajevo, I was a third-year college student double-majoring in sociology and journalism. I had experience as a journalist reporting on the war. I’d spoken French since I was 9 years old. In America, however, none of this mattered—it was as if my credentials did not count.

That brings me back to the day I first stood on Loyola’s Lake Shore Campus. Loyola represented hope for a much needed break from our harsh reality, an escape from my past. Little did I know the University had a mission of social justice that matched my own, along with faculty eager to make a difference.

Before I could enroll in a degree program, I first had to study the English language. I took out a loan to pay for a semester of intensive language courses including speech and pronunciation, writing, and reading. We read newspaper articles and discussed local news. We recorded ourselves as we learned to pronounce words correctly. It all prepared me to take the standardized English language test, an essential requirement for foreign students who wish to apply to American universities.

My first stop at Loyola was the sociology department, where I inquired about the transfer process. There I met Anne Figert, who is now the department chair. After she walked me through the procedures of transferring my courses from the University of Sarajevo, I was able to begin my coursework, but I soon realized I did not fully grasp the cultural and social complexity around me. I still didn’t have full confidence in my English skills. Then came the moment when it all finally clicked.

I remember sitting in Professor Lauren Langman’s class as he was talking about critical theory. As he described the Marxist concept of alienation, I was soaking in every word he said. I thought to myself, “Finally! This resonates.” I loved his class. He was my favorite professor, an exceptional social theory scholar, and a major source of support in nearly everything I have done professionally since I graduated.

As refugees who were just settling into a new life, my family lived on a tight budget. The four of us lived in a one-bedroom apartment relatively close to Loyola’s campus. Rather than going to the library, I did most of my studying on Granville beach, sitting on the rocks by the lake. I often say that I earned my bachelor’s degree with honors literally studying by the lake.

Coming full circle
After graduation, I continued my academic journey by earning a master’s degree from the University of Chicago and eventually, almost two decades later, getting my PhD from the University of Melbourne in Australia. But there was never a question in my mind about where the focus of my work should be. My personal experience has served as my drive to work in justice and human rights. I wanted to take the skills I learned in my new home and apply them to the home I’d been forced to leave many years earlier.

As part of my post-graduate training, I was awarded a human rights internship grant to do research with the United Nations High Commissioner for Refugees in Bosnia and Herzegovina. As a junior analyst returning to Bosnia, I reviewed laws to assess the legal and practical obstacles Bosnian refugees face upon returning home, to help create a policy to allow for displaced persons to return.

From there, I launched my career in human rights. I represented the U.S. government as the seconded expert to the U.N. Mission in Kosovo, where I was the key technical adviser on legal reform in the areas of anti-trafficking, gender-based violence, and human rights and rule of law.

My doctoral studies provided an opportunity to dig deeper in the post-socialist transformation of Bosnia and Herzegovina. As the state goes from war to peace, Bosnians who suffered terrible crimes are being ignored. Yet, recognizing victims’ losses and injuries is essential for democracy building and future social and political stability. Because wartime crimes and injustices are widely denied, Bosnians are left to independently seek justice for rights violated using courts.

This February marked exactly 23 years since my family left Bosnia and Herzegovina, and a little over six years since my father died in Chicago. But it also marked a new anniversary. Last February, I found myself back on Loyola’s Lake Shore Campus to teach part-time in the sociology department.

Being back in the place where I started out as a new refugee in America—and where some of the professors who helped me so much still teach—feels like coming home. I feel privileged to be able to help guide a new generation of young scholars in using the sociological imagination to look at the world in new, critical ways. They must learn to see beyond what is obvious and to recognize structural injustice. I want to teach them to know their rights, to advocate for themselves and others, and to help shape society into a more just place, one step at a time.

I imagine there are many other things I could be doing in my career. However, there is nothing else I hear calling my name. Human rights and justice work is not a matter of vocation for me; it is what my life is all about.