The art of healing 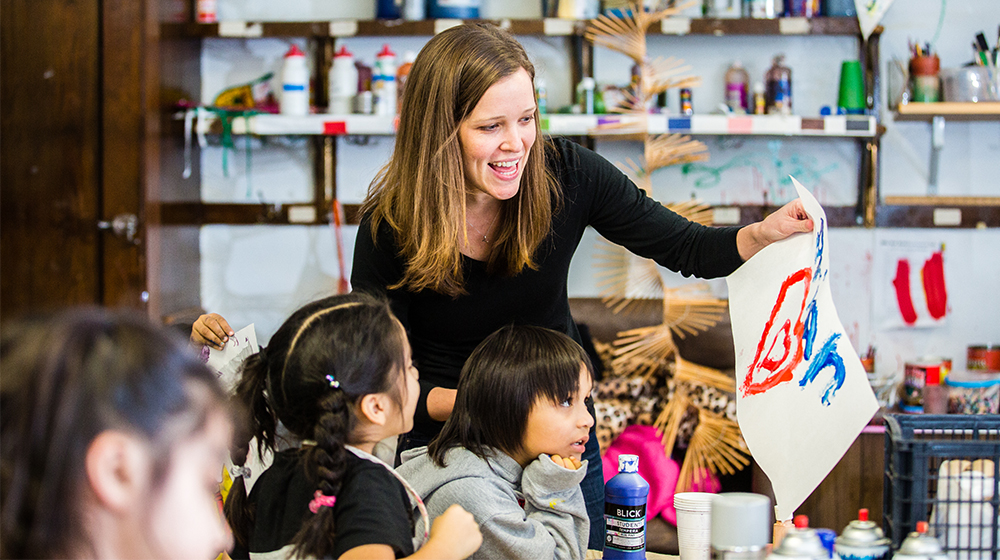 Emily Obringer (MD '11) oversees children as they paint at the Quinn Community Center in Maywood, where Obringer has volunteered since her third year at the Stritch School of Medicine. (Photo: Natalie Battaglia)

Across the street from the rumble of rush hour traffic on the Eisenhower Expressway, about a dozen children ping pong around a brightly lit art room, most with finger paint caked on their palms. At the center of this whirlwind is Emily Obringer (MD ’11), fielding shouts from the kids to have her look at their creations. A 5-year-old named Joshua hovers quietly near her with his finished artwork, proudly showing her his purple creation. She hangs Joshua’s painting up along with the rest on a clothesline, below a hand-painted sign that reads “Quinn Community Center.”

Obringer’s work with the Maywood center started during her third year as a student at Loyola’s Stritch School of Medicine. She started out working in the soup kitchen at St. Eulalia Parish and soon became involved in the birth of the center.

The Quinn Community Center was at first just an empty former school building attached to St. Eulalia—with parish leaders questioning the best use for the space. Soon it became a safe haven for kids to do arts and crafts, finish their homework, or simply hang out. Maywood is a small village that spans barely more than 2.5 square miles and doesn’t boast many after-school activities for its kids or central gathering areas for its residents.

In her beginning days as a volunteer in the soup kitchen, Obringer sensed the kids, and the teenagers in particular, were eager to create their own opportunities in a place where there weren’t many. “The teens identified that void in the community themselves,” she says. “The first thing they did was create a talent show because they didn’t have any ways to express their interests. They often talk about north of the Eisenhower and south of the Eisenhower in Maywood. There’s very little for the kids on the south part of the city where they are.”

After the success of the talent show, the teenagers wanted to do something for the younger kids in the neighborhood over the summer. That led to the creation of a summer camp hosted by the Quinn Community Center.

Working around her hectic medical school schedule, Obringer helped the teenagers organize a summer camp for about 25 Maywood kids. Now about to be open for its fifth year, the Quinn Community Center summer camp has more than 120 kids in the program with about 30 Maywood teenagers acting as counselors and more Stritch students volunteering.

As the camp gained momentum in the community, Obringer looked for ways to incorporate her medical school training into the Quinn summer camp. She received a grant from the American Academy of Pediatrics that let her build in a nutrition component. The kids are now given milk and water instead of juice to reduce sugar intake. They’ve also created a garden at the community center to grow their own vegetables.

This year Obringer would like to have Loyola medical students teach the teenagers basic health and nutrition concepts, which the Maywood teens can then pass on to younger campers. “It’s been interesting to watch them grow from a health perspective,” she says. “In one of the boxed lunches in the first year of the camp there was a stick of celery and we had the 5-year-olds saying ‘what is this?’ So that spurred me into getting the grant, and now they grow their own veggies.”

Gabriel Lara, director of the Quinn Community Center, says the children had very little exposure, if any, to healthy foods. “A child who before was eating nachos with cheese and drinking soda is now eating salad, freshly cooked pasta, drinking water, and having fruit for dessert,” she says.

Working closely with the kids and seeing their limited access to healthy foods and organized exercise, as well as other health inequality issues, helped inform Obringer in her current fellowship in pediatric infectious disease at the University of Chicago Medical Center. “We talk a lot about medication compliance or why isn’t this kid coming to his appointments,” she says. “When you know it from the other side, you’re now asking yourself, ‘Is it because there’s a single mom who doesn’t have a car?’ or ‘Is this child always going to have asthma medicine handy when they’re playing?’ It gives you a totally different perspective when you’re seeing them in the doctor’s office.”

Obringer’s reach extends beyond just the kids at the summer camp—she’s known and respected by everyone who walks through the center’s doors. “To the children, she is the fun and creative teacher,” says Lara. “To the teens, she is the wise and cool mentor. To the adults, she is the hard worker and committed doctor.”

During the second summer of the camp, Loyola Academic Summer Program Integrating Resources for Excellence (ASPIRE) students volunteered to help. Then last summer, Stritch went further and helped fund a camp manager position, which was filled by Manuel Bernal, a current second-year medical student at Loyola. “It’s amazing to see how much it’s grown since the start,” Obringer says. “The first year we started out with a couple hundred bucks from University Ministry and people donating bats and balls and art supplies.”

Through her years at the Quinn Community Center, Obringer has formed lasting ties with the community. She knows the name of every child who flits in and out of the arts and crafts room; their parents greet her warmly. Those teenagers who helped form the original camp—some of whom are in college, others working full time—come to see her whenever they’re all in Maywood.

One connection ended up being lifelong. While volunteering in the soup kitchen at Quinn, Obringer befriended a mother with nine kids and another on the way. The woman was set to deliver at West Suburban Medical Center, where Obringer was doing a family medicine rotation. On a Saturday morning after finishing her rounds, Obringer saw the mother being pushed into the hospital by her oldest son and decided to stay with her during the delivery.

She became the godmother of the little boy—Joshua—who now shadows Obringer whenever she’s at the Quinn Community Center. It is one of the strongest bonds she’s made in Maywood. “I call it one of my God moments,” she says, “because you can’t make up that kind of coincidence and connection.”