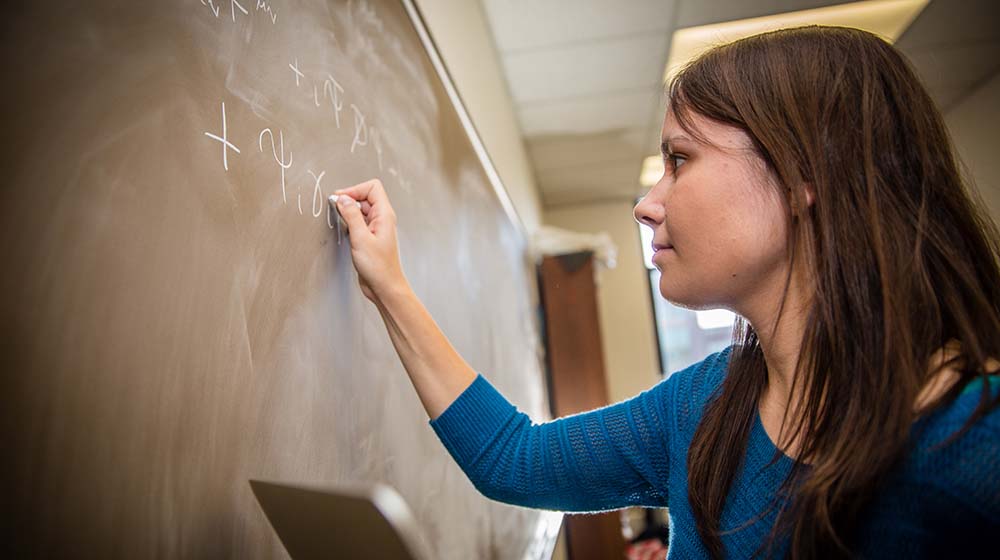 Barbara Skrzypeck works inside Cudahy Science Hall on the Lake Shore Campus after returning from her summer internship at CERN in Geneva, Switzerland. (Photo: Natalie Battaglia)

To say senior Barbara Skrzypeck had the experience of a lifetime last summer may be an understatement. Skrzypeck, a physics and mathematics major, spent time with the world’s leading scientists in Geneva, Switzerland, at the European Organization for Nuclear Research, known as CERN—the birthplace of the World Wide Web. She was one of only 17 U.S. undergraduate students chosen for the prestigious research program.

What attracted you to this internship?
First, I wanted to get a taste of high-energy physics because most of the work I do here at Loyola is theoretical and research-based. Second, it’s CERN. It’s the center of experimental high energy physics, and it’s known for the Higgs boson, which won the Nobel Prize in Physics in 2013. CERN is a place where you have a collaboration of scientists from all over the world. I was really excited to be a part of that.

What did you work on at CERN?
I worked on the ATLAS project, which is one of the experiments currently running at CERN. It’s an experimental collaboration that looks at proton-proton collisions. I was working on modifying the particle flow algorithm that aims to improve jet reconstruction in the ATLAS detector. My job was to look at one part of the algorithm, which is traffic extrapolation, and to try to find a way to make it more efficient.

What’s something interesting you learned there?
I discovered what working in experimental physics looks like: It was a lot of collaboration. I gave six presentations over two months, and most of those were to the particle flow community and the ATLAS group. I was able to see how the work of experimentalists is highly interactive and collaborative.

How do you think this internship will help you in your career?
It’s opened up a lot of opportunities for me in experimental physics. And particle physics is something that I am now pursuing as I look at grad schools. Beforehand I didn’t have as much research experience outside of Loyola. Now, I have a taste of various other aspects of physics that I didn’t know about before.

What was your favorite part of working at CERN?
I really enjoyed getting to know the scientists. Also, learning about high-energy physics and the technical aspects of the detector. During lunch breaks, everyone would go out and talk about physics. Unlike going to class for an hour, I had a different kind of exposure by interacting with scientists.

If you could work on any physics experiment, what would it be?
That’s a really hard question. Ideally I’d like to contribute to theory and experiment. For the time being, I’d love to go back to CERN. I’ve gotten really interested in what I learned there, and there’s still so much more to learn.