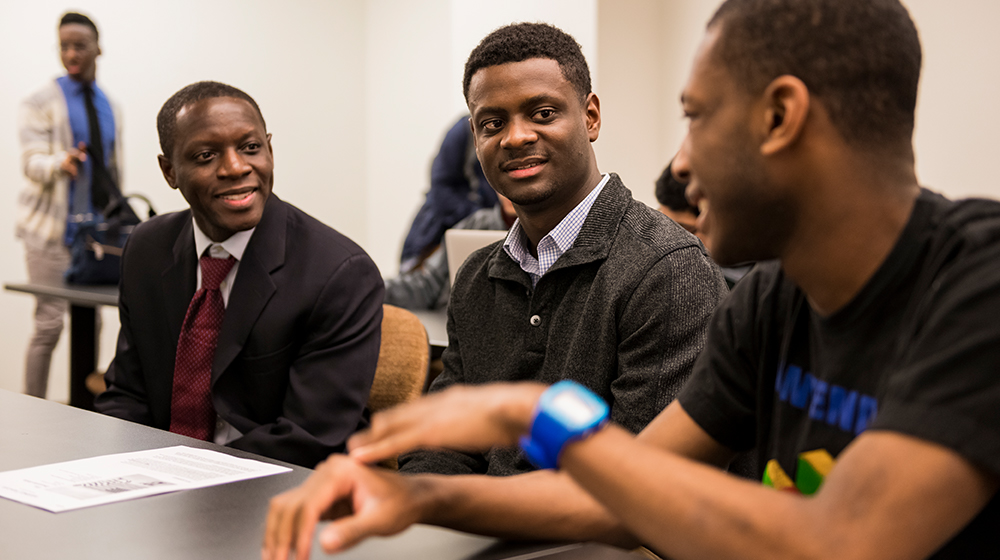 Students at Arrupe College are getting some valuable advice from mentors like Loyola School of Law student Jalen Brown (center) through the Black Men for Success program. (Photo: Matthew Ng)

A new mentorship program is helping Arrupe College students get ahead

When Jacque Stefanic began his freshman year at Arrupe College in the fall of 2017, he came downtown to campus only to attend class, then immediately went back home. He had no plans to get involved outside the classroom–until he got an e-mail inviting him to the first meeting of a group called Black Men for Success.

“My classes end at 5 o’clock, and I would be out the door,” Stefanic said. “But now, I’m at school from 9 a.m. to 7 p.m. every day.” Those long days include being a senator with student government and working as an intern in the Executive Education program at the Quinlan School of Business, all of which Stefanic attributes to his involvement with Black Men for Success. “The mentors helped me realize all the opportunities Arrupe is giving me, and I want to take advantage of them.”

Founded in 2015, Arrupe College acts as a bridge between high school and a four-year degree for diverse, low-income, first-generation college students. Black Men for Success (BMS), which began last fall, provides additional, holistic support for African American students through academic support, social-emotional mentorship, and career counseling. In April, the Robert R. McCormick Foundation made a gift of $1.5 million in support of Black Men for Success and other diversity and student success programming at Arrupe.

In BMS, Arrupe students are paired with a mentor who helps them hone their abilities and position themselves for success at Arrupe and beyond. The group, comprised of about 15 Arrupe students and their mentors, meets every other Friday evening, and mentors provide additional one-on-one support. The mentors—including several Loyola law students as well as practicing attorneys—invite professionals to speak to the group on topics aimed at helping the Arrupe students succeed.

Stefanic said it was the interview tips from his mentor, law student John Gitta, that helped him land his job at Quinlan. Gitta also helps Stefanic with research papers—including a recent one for his Roman civilization class that earned an A. Stefanic is studying business administration and would like to continue his education at Quinlan after he graduates from Arrupe.

Jalen Brown, a second-year law student, is another mentor with Black Men for Success. He said the mentors try to offer practical advice, like avoiding distractions to focus on studying, as well as career tips. “I think they like having a group of people who support them and want them to succeed,” Brown said.

For Brown, it is also an opportunity to prepare for his own future. “My goal as a lawyer is to help others and be a part of positive change for the future,” he said. “This program teaches participants how to be better students and better men. We want them to do well in school and guide them toward pursuing a four-year degree.”

The McCormick Foundation grant will fund an Assistant Dean for Student Success and two full-time faculty members, all of whom will support the Black Men for Success Program, as well as speakers, conferences, and events for BMS. It will be administered over a three-year period, ending in June 2021.

“Arrupe’s strategic goal to recruit and retain African American male students aligns with the McCormick Foundation’s efforts to facilitate opportunities for the underserved black population of Chicago,” said Father Steve Katsouros, S.J., dean and executive director of Arrupe College. “This is another game changer brought to us by McCormick, whose first gift to us for $1 million in 2015 encouraged others to invest in our startup college. All of us at Arrupe are extremely grateful to McCormick.”

“We are proud to support the launch and growth of such an innovative model to make college accessible, affordable, and successful for these amazing young people,” said David Hiller, President and CEO of the Robert R. McCormick Foundation.