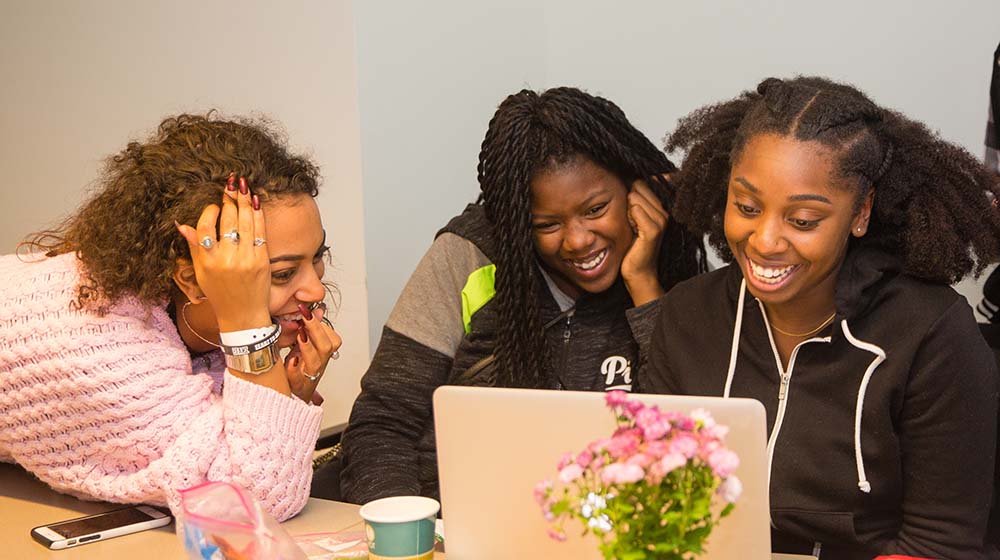 Every Friday from 5 to 9 p.m., about 50 middle and high school students from Edgewater, Rogers Park, and Uptown gather to play games, get homework help, and hang out with friends. Among those friends are Loyola students who choose to spend their Friday nights shooting hoops or lending an ear to kids from the community.

The two groups are brought together by Edgewater Kids United, a unique mentorship program launched last October by Loyola and Sacred Heart Schools. “We noticed when working with the alderman and the other local schools that the middle school kids in the neighborhood—given the increased violence and gang activity—were more at risk,” says Bridget Couture, director of Inclusion and Community Engagement at Sacred Heart School in Edgewater.

Confident they had the skills to address this problem, Couture partnered with Bridget Wesley, director for Student Transitions and Outreach at Loyola, and Antonio Thomas, a counselor with the Becoming a Man program at Swift and Goudy Elementary Schools, to develop the program.

The group usually meets at Sacred Heart, but on nights when the school is being used for other events they move to Loyola’s Lake Shore Campus. Loyola students play a key role, serving as mentors to the teens. “It’s been an amazing gift to the kids to have mentors who are older but still relatable,” says Couture.

George Roussakio, a senior political science major at Loyola, found out about Edgewater Kids United from a friend and has been serving as a college coach ever since. Seeing how much the kids get out of the program motivates him to keep coming back.

“We create opportunities for kids to succeed because, unfortunately, the communities do not open the doors for them,” he says. “In one way or another, all of the kids are extremely talented and they have a lot of potential.”

The program is designed to be whatever the kids involved want it to be, which ensures they will want to continue to come every week. Wesley explains that it emphasizes a “neutral safe space” where kids can connect with each other despite outside conflicts like gang affiliations. Daily life can be challenging and wear on kids, she says, so one goal of the program is to relieve them of that burden.

“We made the decision early on that this was going to be an explicitly warm and loving program,” says Wesley. “And I think we’ve seen how much the kids not only come to expect it but appreciate it. They bring their best, wonderful, goofy selves—it’s really kind of beautiful to see.”

Edgewater Kids United also helps kids feel “known” in the community, Couture says. They visit nearby businesses so kids can become familiar with local business owners. “The more we can engage children who are not visiting those places on a regular basis, the better our community will be as a whole,” she says.

Another benefit is building positive relationships between Loyola and people in the area, says Wesley.

“Starting with the children is a good step towards having families understand and believe that the University cares about them and wants to be a good neighbor to them,” Wesley says. She also stresses the importance of kids feeling like they belong on a college campus. “This can really shift their mindset about what their own future might hold.”