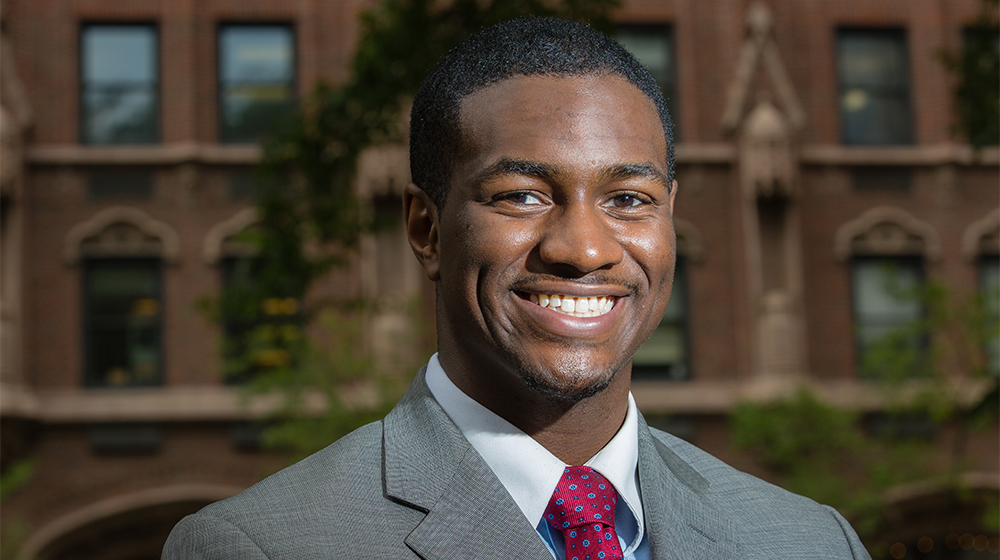 Stritch School of Medicine student Kamaal Jones is working with Project Brotherhood, an organization on Chicago's South Side that takes a holistic approach to health for young black men. (Photo: Natalie Battaglia)

Before he was a student at Loyola’s Stritch School of Medicine, Kamaal Jones took a trip to South Africa in 2012, where he experienced firsthand the country’s overburdened health care system. Jones, now a second-year medical student, kept an online journal during that summer trip and had a revelation during his time there.

He wrote: “One of the most interesting things for me was that, as an African American, this is the first time I’ve ever truly just blended in. It seems like a minor thing, but it was strange to me to be surrounded by other black men and women everywhere. At hospitals where I’ve been before, I always stuck out like a sore thumb, but here, I was home. I truly loved it.”

Fast forward two years, as Jones was settling into his busy schedule at Stritch. During and after his undergraduate years at Cornell University, and after outreach work in South Africa, Haiti, and Port Chester, New York, which is near his hometown of White Plains, Jones was itching to rediscover this feeling in a community near Loyola.

He was particularly interested in black men’s health, and through Stritch, he discovered Project Brotherhood. The South Side–based organization looks to increase health awareness in black men, not just physically but also mentally, socially, economically, and spiritually. It provides preventive health training that is relatable and understandable for black men of all ages. Its doctors—all black—provide medical services out of Woodlawn Health Center for men who either don’t have access to regular clinic services or don’t feel comfortable in that environment. They also provide resume writing classes, fatherhood support groups, and other social support groups.

Jones immediately took to Project Brotherhood’s philosophy and their approach to caring for specific needs of black men. He felt it synced with his own reasons for going into medicine.

“You have to have a grasp of what’s happening in the community to be able to understand the pathology of what’s happening with the patient,” Jones says. “You can have a much broader effect through this kind of public health work in ways you can’t necessarily do by the time they’re actually coming into a doctor’s office or hospital.”

Addressing community health disparities is one of the four priorities of Loyola's "Plan 2020: Building a More Just, Humane, and Sustainable World." Read more about the University's strategic plan here.

Jones has been involved in a number of programs at Project Brotherhood. One is through his Albert Schweitzer Fellowship, a national year-long program that lets students create and implement efforts to improve the health of underserved communities. Through his fellowship, Jones helped lead an outreach program to train high school students about basic public health principles.

“When he first started coming here and teaching the public health class, I think it was a real eye-opening experience for him,” says Marcus Murray, Project Brotherhood’s executive director. “He was making a program for black kids from the city, and being able to communicate with them was a skill he had to hone. It’s not like just seeing a patient in an office; it’s understanding where they’re coming from and just being able to have a conversation.”

Jones first asked the kids what their concerns are in their neighborhood. At the time it was gun violence—the Laquan McDonald shooting had recently happened nearby, and both kids and adults were troubled by what was taking place in the community. Jones was helping the kids figure out how that intersected with their health and well-being. They also discussed smoking, drinking, and issues that come along with generational gaps between older and younger men.

Through all of his public health work, both abroad and on the South Side, Jones has found working with the members of the community and teaching them to help themselves is important in meeting their specific health needs.

“When you look at the history of what went into the building of the communities of Chicago and the segregation that occurred, you can see that so many resources have been pulled out of the South and West sides,” Jones says. “Wherever we can bring in resources and use them to guide the community to meet what they see to be their needs, that’s the most crucial thing. It is helping them get a platform so their voices are heard.”

His Schweitzer Fellowship public health awareness group paired well with another project he was given by Murray. Jones, along with a few social workers, met weekly with a group of high school students who were victims of gun violence, giving them a safe space for emotional support. Their conversations range from safety to hip hop. Making those connections has been one of the most rewarding parts of Jones’s work with Project Brotherhood.

“He has a natural talent for talking with these young people,” says Murray. “They all gravitate towards Kamaal. He’s a genuine, honest person who is willing to learn. I think everyone who meets him sees that.”

Lena Hatchett, PhD, director of Community and University Partnerships and an assistant professor in the Neiswanger Institute for Bioethics, connected Jones with Project Brotherhood in his first year. She believed his passion for public health and desire to help black men made him a perfect fit for the organization. “He is able to recognize and cultivate the assets and abilities of the high school students he will engage,” Hatchett says.

Though Jones doesn’t know where he wants to be for his residency, he knows he’d like to work with an organization like Project Brotherhood. He’s also interested in public health research, and the organization’s population would be ideal. “They have a really unique patient population,” Jones says. “Partially because you don’t have that many black men who are doctors, it’s hard to get black men into hospitals and clinics before it’s an emergency a lot of the time.”

Wherever Jones ends up after graduation, his already deep roots in community outreach will continue to grow and play a large part in his medical career. “Medicine can’t be understood without a community context,” he says. “No patients are islands unto themselves. They’re all part of some greater web of interconnection.”