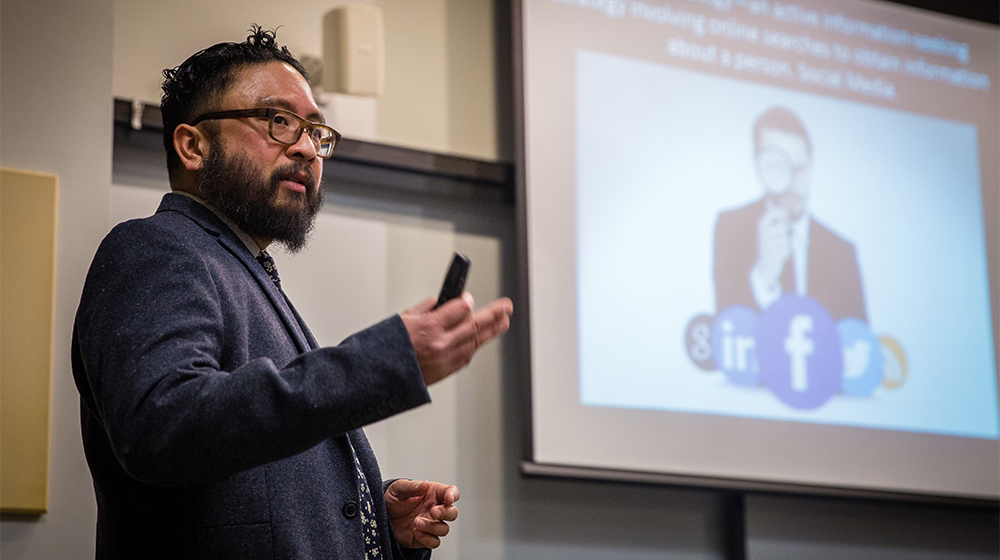 George Villanueva, PhD, brings a wealth of experience with community organizing in Los Angeles to his work at Loyola's School of Communication. (Photo: Natalie Battaglia)

After forging his expertise in issues of urban justice in Los Angeles, George Villanueva brings his unique perspective to Loyola’s School of Communication

George Villanueva, PhD, remembers the day in 1992 when the policemen who assaulted Rodney King were acquitted. Los Angeles erupted in rioting. Villanueva was at middle school, 25 miles from his Central Los Angeles home. Businesses were set on fire and school buses couldn’t risk making their way through the violence. Parents kept their children at home. Schools were closed for more than a week.

“It was stark, going through that experience,” Villanueva says. “It played a part in forming my outlook.”

Villanueva, who came to Loyola in 2015 as an assistant professor in the School of Communication, credits the experience with drawing him to social justice work. It led him to spend more than a decade in the intersecting world of Los Angeles politics, community media, and community organizing for sustainable urban development.

After earning his undergraduate degree in Black studies and history from the University of California Santa Barbara, Villanueva returned to Los Angeles, working with organizations and elected officials who were trying to make the city better for residents.

“That deepened my interest and kept me thinking about how to turn the city around. LA could have gone much more negatively than it has in the last 30 years,” he says. “I’ve seen so many examples where people have banded together to work for the common good.”

That work made Villanueva aware of how impenetrable urban planning is for most people—how much of it is complicated by its fiscal aspects and capital infrastructure projects—and he decided to return to school. His goal was to learn how to better engage and teach others how to communicate urban planning. He earned his doctorate at USC’s Annenberg School for Communication and Journalism, where he focused his research on civic engagement, spatial justice, and sustainable urban development.

So why is this Angeleno, a man deep in LA politics, at Loyola in Chicago? “I wanted to be in a big city and at an institution that would support social justice work,” he says. “Chicago and Loyola—with its Plan 2020 and Jesuit tradition—were a big draw.”

Villanueva dove into learning about Chicago’s 77 community areas and more than 200 self-identified neighborhoods. “Chicago has a strong sense of itself as a city but also as neighborhoods,” he says. “Before communities can successfully organize, there needs to be a feeling of belonging, of neighborhood pride. Neighborhoods aren’t just geography, they’re also social perception.”

Villanueva himself has become involved with Chicago community organizations and taken part in local summits, most recently for conflict resolution and peacebuilding. “What I’ve see here is the process for democracy versus violence,” he says. “My own sense of optimism tells me people can come together and work towards solutions in their neighborhoods.”