The tooth of the matter 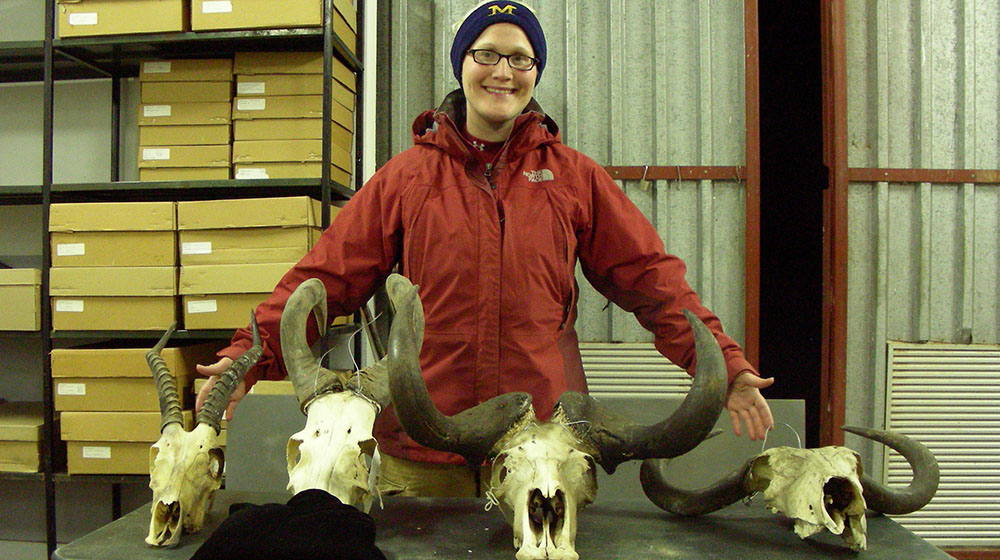 Last fall, more than 1,200 hominid fossils were discovered and excavated in and around a cave system called Rising Star in northeast South Africa. The quantity and preservation level of the findings garnered international attention, and the world is waiting to find out what exactly Rising Star contains. Paleoanthropologist Juliet Brophy, PhD, a lecturer in Loyola’s Department of Anthropology, is one of the scientists who will help answer that question.

Brophy is now on site at Rising Star, analyzing  fossil teeth and comparing them to data sets from other sites. By photographing the teeth, digitizing their images, and, in the simplest terms, trying to match the shapes to others in her collection, she may be able to identify the species of hominids—our early human ancestors—whose remains have been in those caves for millions of years.

The first teeth Brophy analyzed were those of bovids, which are in the same family as cows.

Although paleoanthropology is an interpretive science, Brophy was uncomfortable with the level of subjectivity she saw in the field.

“I would say, how do you know it’s X instead of Y?” Brophy says. “If you have a large X, it might look like a small Y. How did you know how to divide those up? Two people can identify the same fossil differently. Or a person can look at a fossil and identify it, only to look at it again 10 years later and change their mind.”

“We rely upon these animals [bovids] really heavily to determine all these hypotheses about extinction events and behavior and adaptations,” Brophy says. “If there’s subjectivity in their identification, and we’re misidentifying these bovids, we’ll have false results and make wrong hypotheses based on them.”

With a more objective way of identifying bovid species by tooth shape, she was able to reconstruct the environment of one of our early human ancestors, throwing doubt on some standing hypotheses about what caused that species to go extinct.

Since she had been so successful with the bovid teeth, Brophy applied the method to analyze hominid teeth at a site called Malapa, also in South Africa, in 2010.

“So we compared the tooth shape of the individuals we identified at Malapa to other species found in the same area in order to aid in their identification,” Brophy says. “The individuals turned out to be a transitional species between early human ancestors and our genus, Homo.”

Brophy’s data sets from Malapa are among those she’s using for comparison at Rising Star. Although results have so far been encouraging, she is still trying to test the assumption that shape is species-specific with hominids.

“If we find that teeth at Rising Star look exactly like teeth at Malapa, does that mean they’re 100 percent the same species?” Brophy says. “Or does it just mean that they have similar teeth?” She is unlikely to settle the debate once and for all at Rising Star, but it’s an exciting question nonetheless.

For a project built on ancient history, Rising Star is also evidence of the future of paleoanthropology. Rising Star, like Malapa before it, is open-access, meaning that the site is open to any scientists whose proposals, like Brophy’s, are accepted for research.

“This is a really new way of doing paleoanthropology,” Brophy says. “Traditionally, people excavate fossils and present at meetings, but then you don’t hear anything more for a year or so. If you know a person or have an in, then maybe you get to see the fossils. It’s been a secretive science for a long time. If you open it up, you have a dialogue; you create a conversation.”

Brophy believes this is ultimately beneficial.

“It’s not good science to keep it closed up. It’s healthy to compare and debate results.”

What has resulted from the open call, which expressly encouraged early-career scientists, is a group of researchers from all over the world and of all ages converging on Rising Star.

Through their expertise and collaboration, we all stand to learn more about our early ancestors.