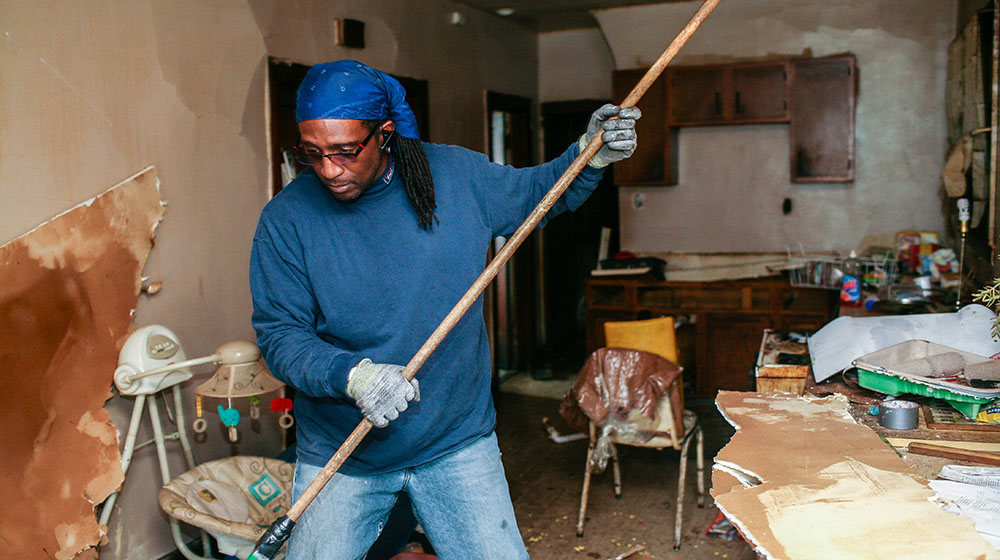 Antoine Day (pictured) and Jarrett Adams, both wrongly convicted of crimes, are now working to provide housing and training for fellow exonerees through their Life After Justice project. (Photo: Natalie Battaglia)

With new transitional housing, Life After Innocence reintegrates the exonerated into the world outside prison

When wrongly convicted people are freed from prison, their journey has just begun. Exonerees—people exonerated of crimes for which they were convicted—have lost years of time with family, earning power, and every other opportunity. They’ve been through the significant emotional and mental trauma of incarcerated life. They are frequently short on money with no place to live, no ID or access to medical care, little ability to use current technology, and only the clothes they’re wearing.

Contrary to a general belief that those wrongfully convicted regularly receive remuneration, less than a third of exonerees receive any kind of financial judgment, according to Laura Caldwell (JD ’92), founder and director of Loyola’s Life After Innocence project. Life After Innocence offers guidance, pro bono legal services, and additional support to exonerees. Students and professors involved with the project help exonerees expunge their records, find housing, search for employment, obtain counseling, obtain computer and cell phone skills, and much more.

“I tell my students that small actions make big changes,” Caldwell says, “especially in the lives of people starting over from scratch.”

Life After Justice, a project spearheaded by exonerees Jarrett Adams and Antoine Day, is a spinoff of Life After Innocence. Adams, who served nearly 10 years for a rape he didn’t commit, earned his undergraduate degree in criminal justice after his release and is now a second-year law student at Loyola and a full-time investigator with the Federal Defender Program. He is planning a career in criminal defense, an area he says is in great need of dedicated attorneys.

“My family couldn’t afford an attorney and my public defender decided not to investigate—not even talking to witnesses,” Adams says. “I’m not bitter, but I’ve got a goal, a destination to reach. The trajectory of my life has all gone around my wrongful conviction, and that’s not all bad. Now I have an opportunity to keep other people from experiencing what I’ve experienced. I don’t expect to change the world, but I do expect to further the trend of helping people the way I was helped.”

Day, wrongly convicted of murder and attempted murder, spent 13 years in the criminal justice system. Putting his own experience to the service of others, he’s now outreach coordinator of prison reentry at the Howard Area Community Center Employment Resource Center. In this position, Day mentors at-risk teens and parolees, implements job training and placement programs, and runs neighborhood stabilization and anti-violence programs.

Safe, stable housing is a critical unmet need of exonerees, many of whom leave prison with no place to stay. Life After Justice aims to provide a base of housing plus an overlay of training and counseling services to help exonerees find jobs, address their emotional issues, and otherwise adjust to their new freedom. Located on Chicago’s West Side, the Life After Justice building originally belonged to Day’s aunt. Renovations to the property are set to begin soon.

“A lot of guys are getting exonerated and have nowhere to go,” says Day, who originated the idea of Life After Justice and enlisted Adams’s collaboration. “They’re put in situations that are really dangerous for them. When they come out, they need someone to trust, someone they can build a relationship with.

Adds Adams, “This isn’t going to be just a house, but a launching pad, with an emphasis on mentoring and therapy. We’re taking broken men and helping them put their lives back together.”

As Life After Innocence approaches its fifth anniversary in January, Caldwell, students and supporters, and their clients are celebrating progress and looking to go to the next level. “When we started, I had four students and three clients” Caldwell recalls.

“Now, I look down the table in our dedicated clinical space and see an adjunct professor, 10 to 12 students enrolled in an established, effective program, and an exoneree who’s now a law student. It’s beyond my wildest expectations. And we see how much more we can still do.”