An intimate portrait of Alzheimer’s

William Utermohlen's "Snow" illustrates the growing reclusiveness of the artist, who is pictured away from the ongoing conversation. Utermohlen continued to paint self-portraits after being diagnosed with Alzheimer's Disease, documenting the affects of the disease on his brain.

According to the Alzheimer's Association, one in nine Americans over age 65 has Alzheimer’s, and the majority of those with the disease are over age 75. A degenerative brain disease, it is the most common cause of dementia and is characterized by a decline in memory, language, problem-solving, and other cognitive skills. For UK-based artist William Utermohlen, the symptoms began in his late 50s and he was diagnosed with the degenerative brain disease before he even reached the age of 65.

William Utermohlen: A Persistence of Memory follows his career, tracing the effects of the cognitive impairment on both his style and perspective. The exhibition at Loyola University Museum of Art (LUMA) showcases the span of Utermohlen’s work, from his classically trained portraiture to emotionally charged abstraction. 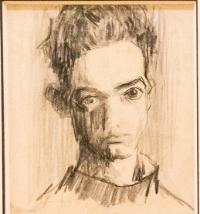 “If you did not know that this man was suffering from Alzheimer’s, you could simply perceive the work as a stylistic change,” says Pam Ambrose, director of LUMA and cultural affairs at Loyola. “As the disease progressed, he was unable to render pictorial space correctly, but was truly able to express emotion through his work.”

‌Walking through the exhibition, Ambrose points to two specific paintings. The first is part of the artist’s “The Conversations Pieces,” a series of six pieces that depict the intimate world of his wife and their London flat. This set of works was created years before his diagnosis, but as signs of the illness were starting emerge. The colorful pieces feature tilted picture planes and ungrounded objects, whimsically floating in space.

Utermohlen’s 1990 piece, Snow, illustrates his growing reclusiveness. Four people are engaged in conversation at the dining room table, while Utermohlen is pictured far removed from the social engagement, on the sofa with a cat in his lap. The piece is flanked by two bleak, black-and-white landscapes, one of which could be perceived as a graveyard.

“This painting gives us a clue that Utermohlen was really pulling away,” explains Ambrose. “He was becoming less articulate at this time. This is where I believe artists have a leg up with the effects of the disease; although they lost the ability to communicate verbally and in writing, they continue to communicate through art.”

LUMA’s ilLUMAnations program, in partnership with Northwestern University’s Cognitive Neurology and Alzheimer’s Disease Center, works to develop that ability. The three-year-old program, offered nine times a year, uses the arts to engage Alzheimer’s patients and their caregivers. The museum at Loyola’s Water Tower Campus was chosen because of its quiet and intimate space—an atmosphere that wouldn’t be too overwhelming. 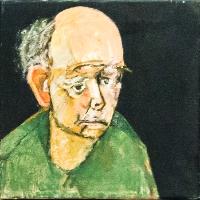 Working with Loyola’s Department of Fine and Performing Arts, the workshops combine art, dance, and music with a social hour. Qualitative evaluations have shown that participants with the disease have gained increased social engagement, self-esteem, and verbal communication skills. In the next year, LUMA hopes to expand IlLUMAnations to include both morning and afternoon sessions.

‌As a second key painting of the exhibition shows, Utermohlen used art to communicate his deepest emotions as his life progressed. In Self Portrait with a Saw (1997), the artist depicts himself with an anxious, perplexed expression and with a miter saw. Though commonly used by artists to cut wood for canvases and frames, the saw meant something more to Utermohlen—his physician told him that the only way to know for certain if he had Alzheimer's would be to cut into his skull to examine his brain after he died. “That image stuck in his mind, and he immediately painted this piece," explains Ambrose. "Artists internalize everything—luckily, musicians and visual artists especially have the advantage of an engrained need, almost compulsion, really, to express themselves.”

The exhibit William Utermohlen: A Persistence of Memory ran through July 23, 2016. For more information on the exhibitions currently on view at LUMA, visit LUC.edu/LUMA.