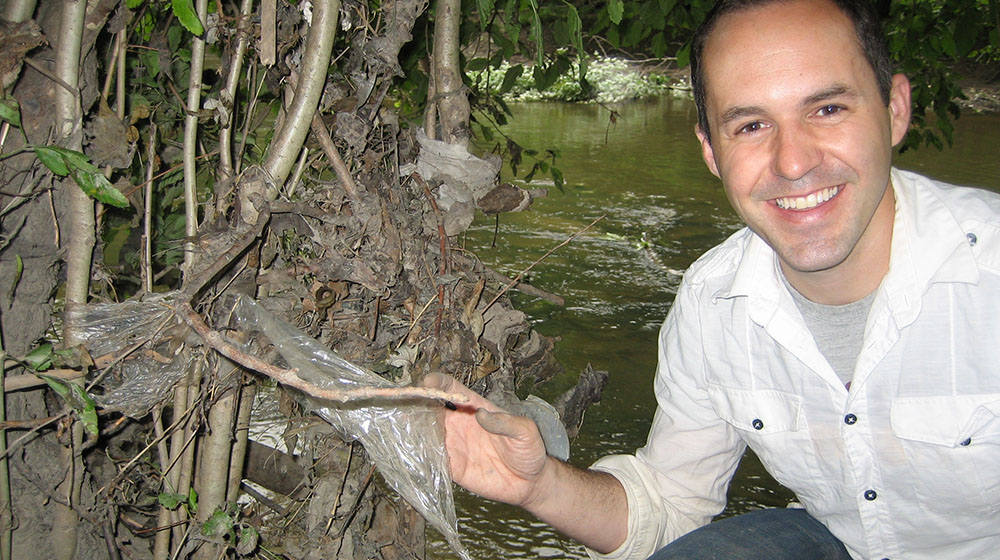 Timothy Hoellein, PhD, collects and analyzes trash in Chicago waterways to learn about the effects of refuse on river ecosystems.

Timothy Hoellein studies garbage in the Chicago River and its effects

As anyone who’s seen (or smelled) the Chicago River can attest to, the waterway contains a good amount of garbage. But what is it made of, and how does it affect the river’s ecosystem? Tim Hoellein, PhD, an aquatic ecologist in Loyola’s biology department, is on the case.

Two years ago, Hoellein and a group of students trawled the North Branch of the river for garbage. “We’d mark off the length of stream, usually about a hundred yards or so, where it was knee-deep, and we’d walk up the river, slowly, sort of feeling and looking and grabbing all the garbage we could find,” Hoellein says. They did the same in the vegetation next to the stream. They hauled all of their findings back to the lab to count, organize, and weigh the garbage.

The garbage was mostly glass bottles, plastic bags, food wrappers, and pieces of ceramic. Among the more interesting items of refuse were pieces of bikes, tires, a bowling ball, a fire extinguisher, and a shopping cart. Having no prescribed set of techniques for garbage analysis, Hoellein borrowed the methods normally used to analyze organic material like algae or insects. Although he knew they’d find a lot of garbage, Hoellein was still surprised by the volume.

“It was abundant and heavy,” he says.

The next step was to analyze what effect the garbage had on food webs in the river—particularly regarding biofilm, the thin slimy film composed of algae and bacteria that covers rocks, driftwood, and garbage if it’s present. The biofilm carries out photosynthesis and is a food source for insects, which are then food for fish. Hoellein wanted to discover if the biofilm on garbage was comparable to that on naturally occurring river objects.

Hoellein and his team cut pieces of glass, plastic, and aluminum into little squares, which were then attached to larger pieces of plastic. They put samples in the Chicago River, the pond at the Retreat and Ecology Campus, and in the artificial stream facility at the Lake Shore Campus.

There were some differences. “We found that the photosynthesis rate was lower on aluminum and glass relative to a natural surface, like a rock.” Hoellein says. “Also, some of the microbes which colonize litter are different than natural surfaces. For example, we expected those on leaves and cardboard to be similar, but in fact they showed strong differences.”

Hollein says there were fewer distinctions among 'hard' or inorganic surfaces—the microbes on rocks were similar to those on glass, plastic, and aluminum.

Understanding these similarities and differences allows Hoellein to make some predictions about what type of litter affects these organisms, which are an important link at the bottom of the stream food web.

He and colleague John Kelly, PhD, also of the biology department, are also collecting data on more watersheds in the greater Chicagoland region.  They are measuring microplastics (small pieces of plastic between 0.3-5 mm) in rivers the area, and finding that concentrations are similar to those in the ocean and great lakes. Their next steps are to carry out the project to examine colonization by algae.  And all this is only the beginning.

“In general, we have just begun to quantify how much of this material is there, and whether we can expect it to have an impact in these urban stream ecosystems,” Hoellein says.