Making responsible choices—both near and far 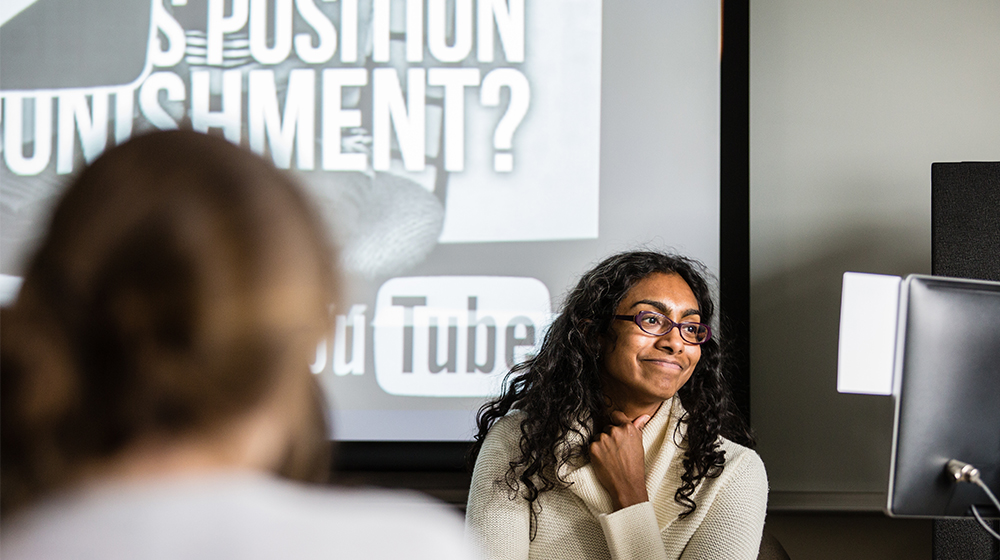 Theology professor Tisha Rajendra, PhD, teaches a course on morality and food, encouraging students to think about the impact of their dietary choices. (Photo: Natalie Battaglia)

Growing up in North Carolina, Tisha Rajendra, PhD, saw history all around her: statues honoring Confederate generals and soldiers who had fought and died for a set of principles that were wrong, she says. “But no one ever talked about that. Part of my fascination with the responsibilities of the past comes from growing up in a place where no one talks about their responsibilities.”

Most of Rajendra’s articles and her forthcoming book, Migrants and Citizens: Justice as Responsibility in the Ethics of Migration, look at issues of migration and the responsibilities of receiving nations. That’s because it’s their policies that often are to blame for driving waves of refugees. “Migration is patterned,” says Rajendra, an assistant professor of theology. “Migration flows. Something sets migration flows in motion.”

Her research is focused on viewing migration in a larger context. “It’s not just poverty or unemployment that drives it,” she says. “A fuller picture of justice needs to be discussed. Responsibilities also need to be part of the understanding.”

Rajendra offers the United States’s history of looking towards Mexico for low-cost labor as an example. There had long been a pattern of circular migration, she explains, where workers would come for the harvests and then return to Mexico. A 1986 policy reform made it more difficult and expensive to cross the border. Workers began coming to stay and bringing their families. “It began what we have today, a huge population of undocumented workers,” she says.

In contrast with her work on international migration, Rajendra teaches about mostly domestic, hands-on issues. In “Moral Problems: Food Systems,” for instance, she urges students to think through their dietary choices. The class has experiential components—the students garden, interview farmers, and live on the budget of someone on food stamps. Students may come in saying they don’t understand why people in poverty eat so many potato chips, but when living on a food stamps budget they get hungry and fill up on low-cost chips. “That’s from the stress of a mere weekend, worrying over every penny and running out of food,” Rajendra says.

Rajendra hadn’t planned on teaching and writing about social justice. Her Bryn Mawr undergraduate degree was in linguistics; she wanted to be a New Testament scholar. “Then I learned that I preferred the concrete questions of my Christian ethics classes,” she says. Her Harvard master’s in theological studies led her to Boston College, where she earned a doctorate in philosophy in theological ethics and became better acquainted with the Jesuits. She came to Loyola in 2010.