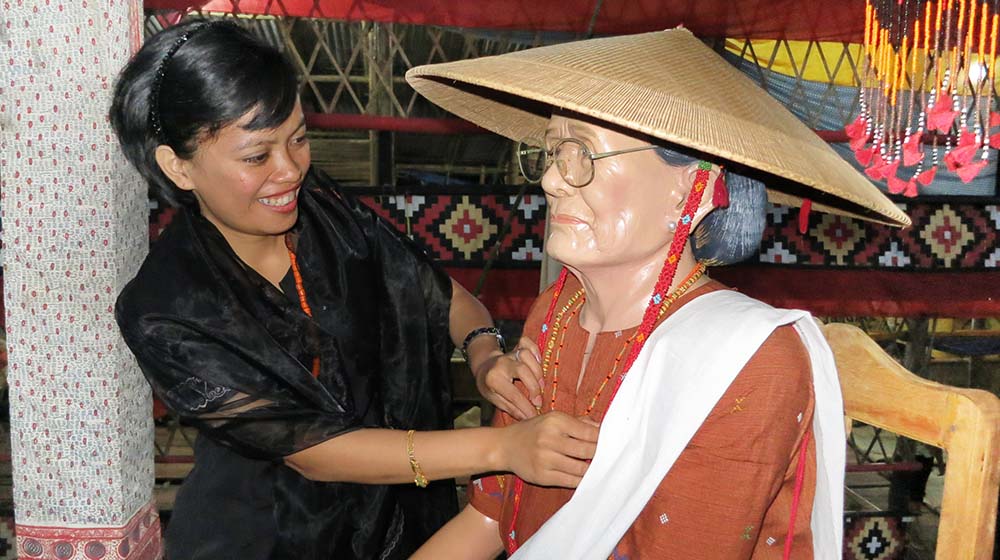 It’s hard not to be sensational when describing Kathleen Adams’s research. For the past 30 years, this anthropology professor has been studying a small Indonesian community, Toraja, which has become something of a tourist destination for the adventurous. Visitors, however, aren’t just coming to see its stunning limestone cliffs or rich art traditions—but rather its unique rituals honoring the dead.

A Toraja funeral can last days, host thousands of visitors, include effigies of the dead, feature water buffalo fights and sacrifices, and sometimes require mile-long processions through a village. “It’s not that they subscribe to a vastly different religious worldview,” Adams says. “That kind of relationship and familiarity with the realm of death, I think, really appeals to foreign tourists because it’s something we tend to segregate out from our everyday lives.”

The majority of the Toraja people practice Christianity, but the pageantry of their burial rituals remains a holdover from when they practiced the “Way of the Ancestors.” This includes keeping the bodies of loved ones for weeks, and sometimes years, in the home.

Toraja people also have a ritual that entails periodically cleaning the graves and sometimes bodies of their deceased loved ones, even years after the funeral. These rituals, says Adams, can often be misunderstood.

“What started happening, as best as I can piece together, was migrants who had moved to Jakarta and other parts of Indonesia, who were often second-generation migrants, were coming back,” Adams says. “The city folk would want a picture next to their deceased relatives, and the images started circulating on Facebook. Toraja became suddenly internationally associated with this idea of the ‘walking dead’ and zombies.”

It’s easy to get caught up in the strange juxtaposition—an online search reveals photos of tourists and family members taking selfies with a beautifully dressed and decayed body. But once Adams starts talking about Toraja, she opens up about a community that sees its relationship with the deceased as something that doesn’t stop at death.

Starting in 1984, Adams spent nearly two years in the region conducting Fulbright-sponsored dissertation research on the effects of tourism and globalization. She stayed with a host family, who would eventually come to know her as their adopted daughter. During her time there and her semi-regular trips back, Adams has seen many funerals, including both her adoptive father’s and mother’s, and knows very well the work that goes into them.

“People will wait a year, two years, even five years to have a funeral because these rituals draw thousands of guests,” Adams says. “You have to build almost a mini village to house everybody and to stage the funeral. If kids are away at school or if family members have migrated halfway across the world, they must work together to find a suitable date and amass the resources needed for the funeral.” 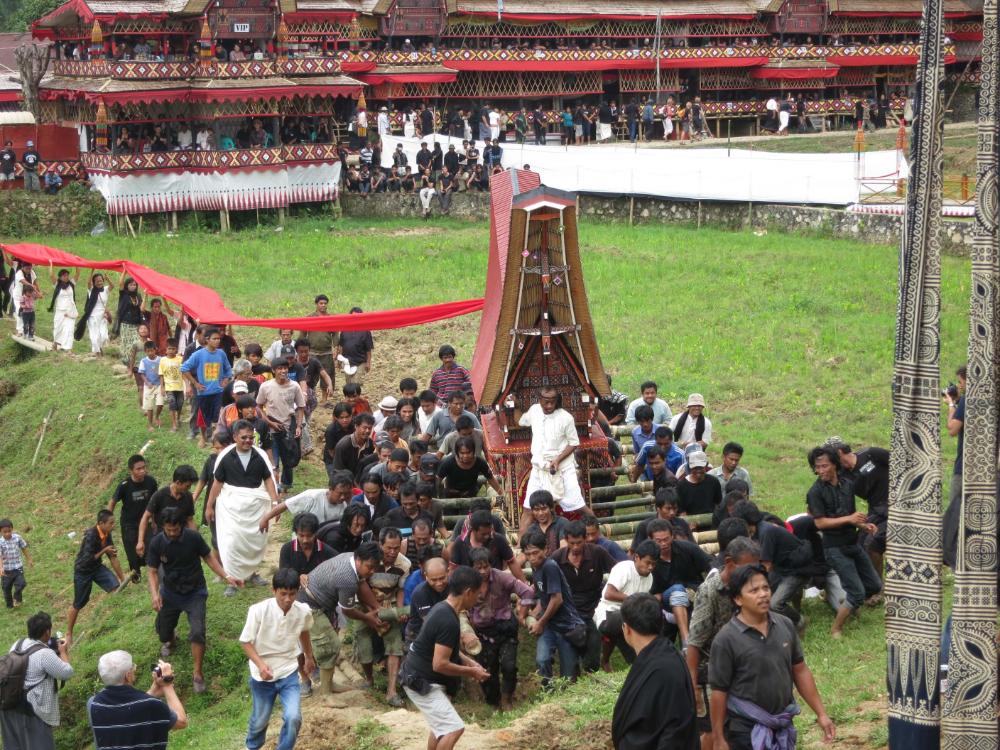 During all of that planning, the body of the deceased loved one is kept at home. When Adams’s adoptive mother died, the family cared for her body in bed for about nine months while they planned the service. “They gave her tea by her bedside. They ritually fed her, and traditionally people talk about that period as a time when the deceased is ‘sleeping,’ ” Adams says.

For her adoptive mother’s funeral, which lasted 10 days, Adams says about 75 smaller pavilions were built to house everyone. At the start of the ritual, guests arrive in extended family groups, often in a procession of 50 to 100 people. All the women and men in the group might have coordinating sarongs, while other men carry rice or lead in pigs and water buffalo.

The body and a carved effigy were carried throughout the village as part of the funeral, which concluded with her adoptive mother’s coffin being sealed in a tomb. The effigy was then placed next to her husband’s so they can remain side by side. “The traditional belief was that one of your souls would remain with the effigy and the other soul would go on to the next world or afterlife, where you would live with all your relatives and the water buffalos as your wealth,” Adams says.

After the funeral, the Toraja people traditionally continue to honor the deceased, bringing them gifts like money, beer, and candy. In exchange, the soul of the deceased watches over them. “There was this ongoing discourse between the world of the living and the world of the dead,” she says.

Less wealthy members of the community hold simpler, more condensed funerals. Their ritual starts much sooner after death, and there may be only one water buffalo sacrifice, not the 20 to 50 that might occur during an elite individual’s funeral.

Adams finds that tourists and the media have a tendency to treat the Toraja beliefs as alien and exotic. They see the traditional dress and rituals of a funeral, but they don’t always see the same people later wearing modern clothes and glued to their phones like anyone else.

In reality, the Toraja community is one that values its relationships with family—and a funeral is the place where they can pay the ultimate respect to their loved ones. “There are some things to be learned from a society that is so comfortable with death,” Adams says. “I think we would all be a lot more comfortable facing the ends of our lives with those kinds of open practices.”

And although those practices may look different from ours on the surface, Adams sees a lot of similarities. “We care deeply for our families and we are concerned about the big questions of existence, life and death, and how to make a life meaningful. For me that’s been an important lesson: not to let the surface differences alienate us from one another.”