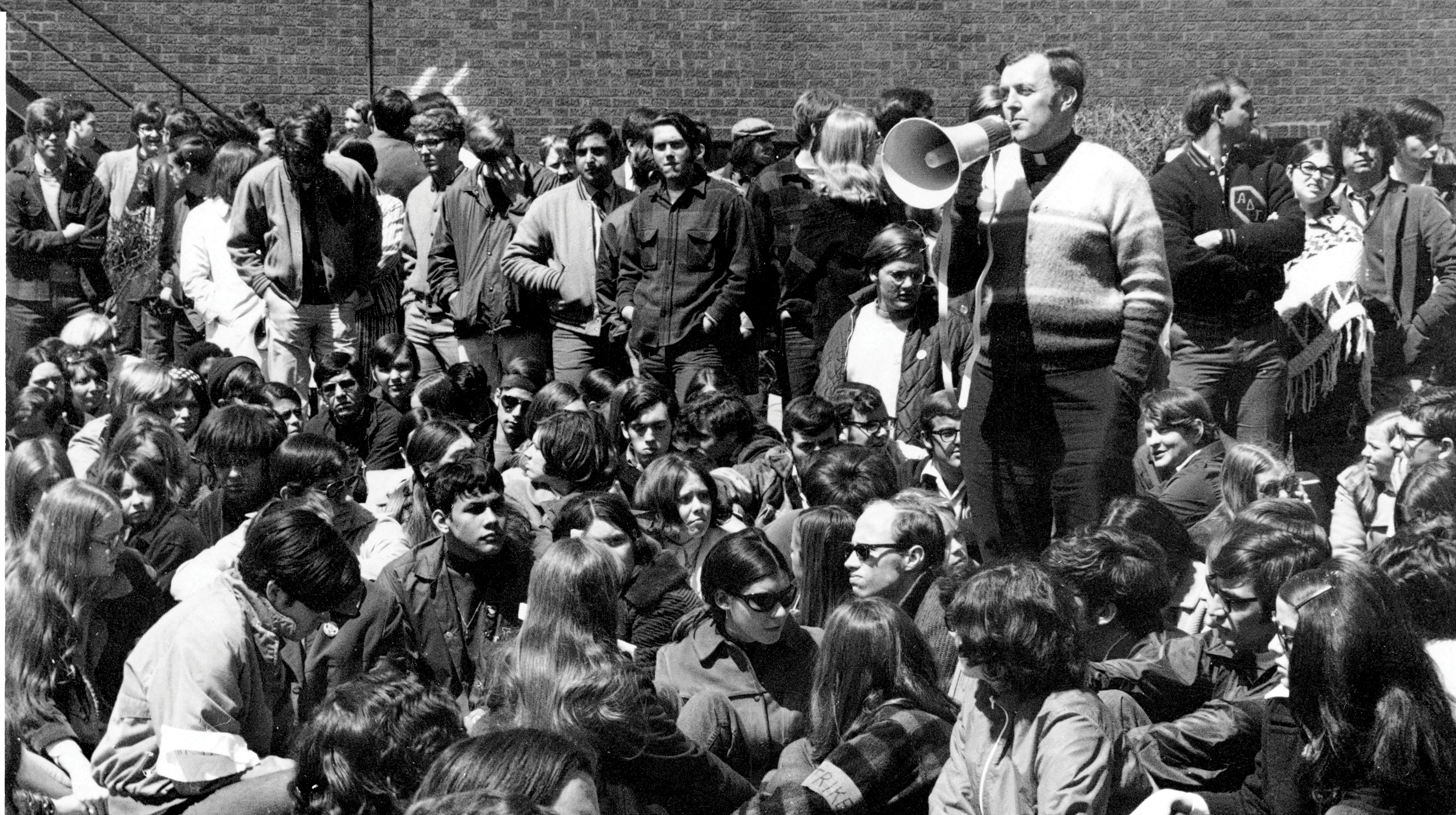 During the Vietnam War, student protests were common on the Loyola campus and students, with faculty support, even shut down the campus in 1970 in the wake of the Kent State Shootings (above). Current students like Loyola junior Kelsey Cheng (below) are also passionate about activism, but often approach it in a different manner. (Top photo: Loyola University Archives; Kelsey Cheng photo: Natalie Battaglia)

Like generations before them, today’s Loyola students continue a tradition of activism on campus

For Kelsey Cheng, the passion for activism wasn’t sparked by just one event. As a freshman, her biology major increasingly seemed like a poor fit. But fortunately, her decision to get involved in student government was paying off. She sought out and received some helpful advice from a Loyola senior while on a retreat, then learned more from her advisor. But what really crystallized her change in direction was a trip to Washington, DC, for the Ignatian Solidarity Network’s social justice conference.

“I was very thrown off,” says Cheng. “The weekend I went was the 25th anniversary of the (murder of the) Jesuit martyrs in El Salvador, and that kind of served as a big inspiration for me wanting to work for justice in my life. I had the realization that if I wanted to keep doing these things like lobbying and having an active role in my government, I needed an experience outside of my own life and background.”

All of these experiences sent Cheng down a different path. She switched her major from biology to advertising and public relations. Now a junior, Cheng remains involved with student government and has broadened her interests by helping out with campus ministry, the Green Initiative Fund, and the student-led Magis Scholarship Initiative, which will provide financial support to undocumented students. As she looks toward graduation and beyond, Cheng says she would eventually like to put her skills and passion to work as a lobbyist.

“I don’t think I would’ve discovered my passion for activism and advocacy had I not come to Loyola,” Cheng says. “This is ‌completely different than all other colleges I applied to, and I think Loyola gives you the tools you need to learn how to become an advocate.”

Many advocacy minded students and alumni have a story similar to Cheng’s. While some arrive on campus dedicated to making a difference, others, like Cheng, find their calling along the way. The motivation could be rooted in a personal struggle against injustice, an experience of witnessing activism firsthand, or values grounded in a family’s ethos. For Cheng, it was an invitation to look at the world and better understand what’s happening and how she could affect change.‌ 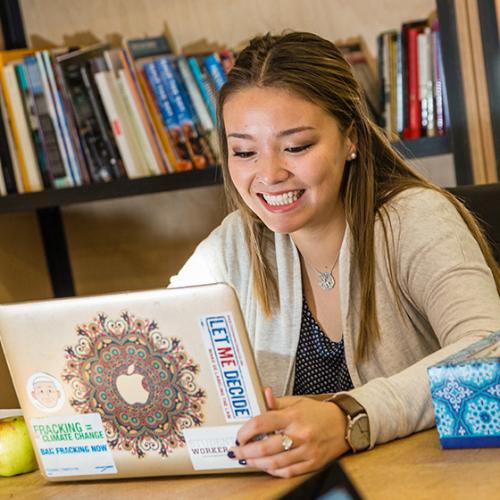 Activism on college campuses has a long and rich history. It has had its ebbs and flows through the years, with quiet periods offset by major protests around issues of national concern. During the Vietnam War era, for example, students made their voices heard at Loyola and on other campuses on a regular basis. Following the shootings at Kent State in 1970, Loyola students and some alumni destroyed draft records and organized a student strike.

“As soon as that happened, the situation went from being a matter of protest to a vociferous reaction,” says history professor Theodore Karamanski. “There were students at Loyola, my cousin included, who really got into this. He went over to the local hardware store and bought some big chains, and they chained up Damen Hall so nobody could get in.” Those attempts to prevent classes, with the support of faculty, ultimately ended the academic year early.

Karamanski arrived on campus as a student the following year and has been a faculty member since 1979. In that time, he’s seen students speak out on the Iraq War and Occupy Wall Street. Today, national issues such as the Black Lives Matter movement have sparked discussion on campus, with the three founders of the movement being invited to speak on campus in January and the first Black Lives Matter conference being held in April. Students also took a stand locally by joining public appeals to Illinois Governor Bruce Rauner to approve legislation extending MAP grants during the state’s budget crisis.

“Since the Enlightenment, the university has been a site for not only the passing down of traditional knowledge but also for the consideration of different kinds of ideas,” says Kelly Moore, an associate professor in the Department of Sociology. “It’s simultaneously a place of tradition—and also a place of creativity, of innovation, and of debate.”

Moore, whose research focuses on social movements as well as science and technology, supported her own causes while in graduate school at the University of Arizona. In addition to fighting to end the death penalty, she was active in the Central American Peace Movement in the 1980s, where she also helped resettle refugees from conflict.

At Loyola, Moore talks to current students taking part in demonstrations on campus, including pro-life groups and gay rights groups. She often finds that they see their rallies as just a continuation of what they’re learning in classes like theology, history, and even science.

“Young people are idealistic,” Moore says. “They are hopeful, and they are trying to make the world a better place. Sometimes what they do is they wonder whether their university can do better, so sometimes they’re taking aim at some practices, policies, or activities of the university. Sometimes they’re taking aim at other things, like war or Apartheid.”

A more active campus allows a university to reflect on how members of its community talk with and listen to one another. At Loyola, many questions have been raised: Is the University doing all it can to foster understanding, welcome diverse perspectives, listen without bias, and create opportunities for dialogue? Considering those questions has led to some changes on campus.

This spring the University undertook a review of its demonstration policy, gathering input from students, faculty, and staff to develop a policy that allows students more flexibility to express their views in a timely, respectful manner. In addition to a more flexible demonstration policy, there have been several listening sessions on campus with faculty, staff, and students.

In January, Interim President John P. Pelissero, PhD, emphasized to the University community Loyola’s dedication to respecting the conversations that take place on campus. “As a Jesuit, Catholic university, we are committed to welcoming an open exchange of ideas and fostering respect and understanding, especially when discussing and debating complex issues,” he wrote in a letter to faculty and staff.

Another commitment has been the appointment of Christopher Manning, an associate history professor who focuses on 20th century politics, to the President’s Cabinet as a diversity advisor. Like Moore, Manning took up the activist mantle during his own college years.

While studying at the University of Alabama in Hunstville, Manning organized a Martin Luther King march with other nearby colleges and universities. And as president of the Black Student Association, he led the fight to stop a fraternity from flying a confederate flag on campus and at sporting events.

‌As a historian, Manning points out that the field is just beginning to look beyond the notable speeches and marches of the civil rights movement. Many researchers are now taking a closer look at what was happening behind the scenes, beyond the momentous events, including those who were organizing the events and working to build support. Manning’s current focus is researching the effectiveness of change through politics and legislation.

“It’s much more glamorous to get the picture of the young dude in the street with a Che shirt on and a beret,” Manning says. “That’s glamorous and it’s important, but that same guy could grow up to become a local alderman or that same young lady could be running for Congress.”

For young activists like Cheng, Manning says there’s a lot to learn from the activists of the past. “Take the time to study movement building and historical case studies to understand that there are multiple roles necessary for a movement to be successful,” he says. “Learn what those roles are, consider the roles that can be utilized to move your agenda forward, and honor the contributions of all of your allies, partners, and teammates.”