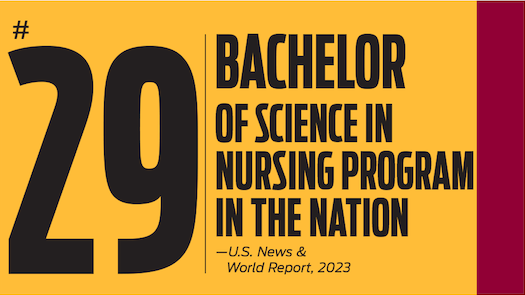 “For the second year in a row, Loyola Nursing has been recognized in the top 5% of Bachelor of Science in Nursing Programs in the country. We are pleased and proud that a program that has been a leader in nursing education for 86 years is being recognized in such a manner,” said Lorna Finnegan, PhD, RN, FNP, FAAN Dean and Professor, Loyola Nursing. “Our BSN program attracts students from across the U.S., and in 2021, we graduated 413 BSN-prepared students who were equipped to meet the complexities of healthcare and the challenges of the COVID-19 pandemic and beyond.”

The Loyola Nursing BSN program includes a traditional four-year option for high school graduates, an accelerated option (ABSN) for individuals with a bachelor’s degree in another discipline, and an RN to BSN program. In 2019, the School partnered with Loyola’s Arrupe College (a two-year program that offers a rigorous liberal arts education to many first-generation college students) to launch a pathway program. Through this pathway, Arrupe students begin Loyola Nursing’s BSN program while pursuing their associate degree, completing both degrees in just five years. The first cohort began the BSN program through this pathway model in Fall 2020.