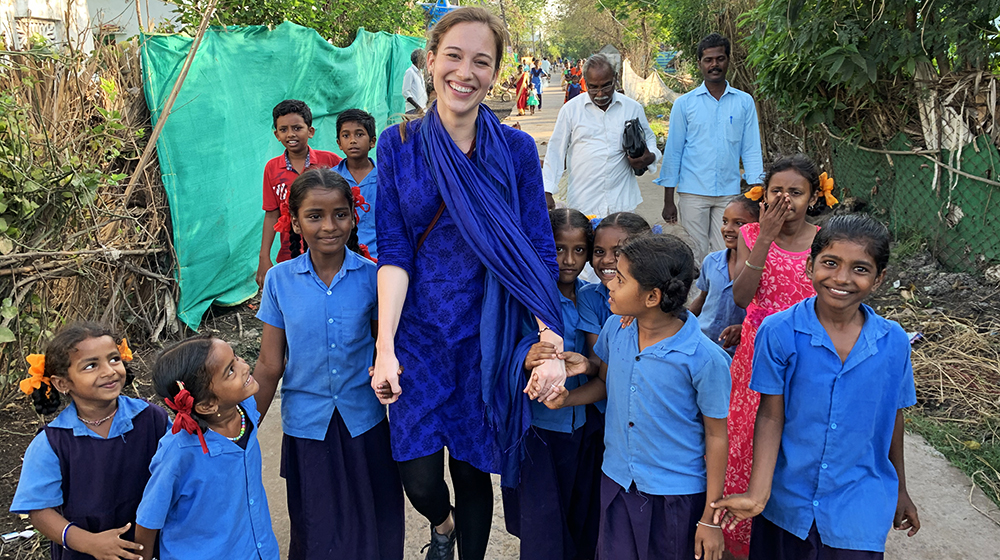 By Eileen O’Gorman and Taylor Utzig

When Megan Ryan (BSN ’15) thought about which university she wanted to attend for her undergraduate education, her path was straightforward:  follow in her brother, father, and mother's footsteps and apply to Loyola University Chicago. But beyond her strong family legacy, it was ultimately the Marcella Niehoff School of Nursing’s reputation that led Ryan to apply. “Loyola’s curriculum is truly set apart from other nursing programs,” says Ryan. “The faculty members are more than excellent educators; they are truly men and women who have devoted their lives to their profession and continue to give back to the community through research and service.”

Today, Ryan is living that same mission as a traveling nurse. Instead of working for a single hospital or health care system, Ryan is employed by an independent nursing staff agency. From Chicago to India, she logs thousands of miles each year, helping address nursing shortages at hospitals around the United States and the globe.

Ryan accepted her first assignment in January 2018 at a Level II Trauma Center Emergency Department in Reno, Nevada. In fall 2019, Ryan moved to the emergency department at Stanford Medical Center in Palo Alto, California, to assist during a hospital-wide transition into a new multibillion-dollar facility.

“Loyola Nurses go above and beyond to meet new challenges with eagerness and excitement,” says Ryan. “I am so proud to be a Loyola Nurse, especially during the historic year of 2020.”

Then, in January, Ryan accepted her first international assignment working with the non-profit IREF (Indian Rural Evangelical Fellowship) to bring free health care to the people of Andhra Pradesh, a southeastern state in India. While traveling with the medical team for two months, Ryan also assisted with ministry outreach projects, gospel meetings, and taught classes to IREF’s college-level nursing students. “At Loyola, I learned nursing isn’t just a job, but a calling with a purpose to serve God through your daily work,” says Ryan. "It means caring for each individual patient with respect, compassion, and humility.”

In fact, it’s that same commitment excellence and service, which helps Ryan recognize other Loyola nurses in the workplace. “Loyola nurses stand out!” she says.

Now, during the World Health Organization’s (WHO) Year of the Nurse, Ryan finds herself back in Chicago at Lurie Children’s Hospital, just miles away from where she began her nursing career. “It honestly amazes me that the WHO named 2020 as “The Year of the Nurse” long before this pandemic began. Often, nursing can feel like an unseen and under-appreciated profession. However, in the midst of this global health crisis, nurses are being highlighted as the heroes of our time,” says Ryan.

A health care hero herself, Ryan continues to reflect upon her time at Loyola and what it means to be a Loyola Nurse. “Loyola Nurses go above and beyond to meet new challenges with eagerness and excitement,” says Ryan. “I am so proud to be a Loyola Nurse, especially during the historic year of 2020.”

Learn more about Loyola’s Bachelor of Science in Nursing program.