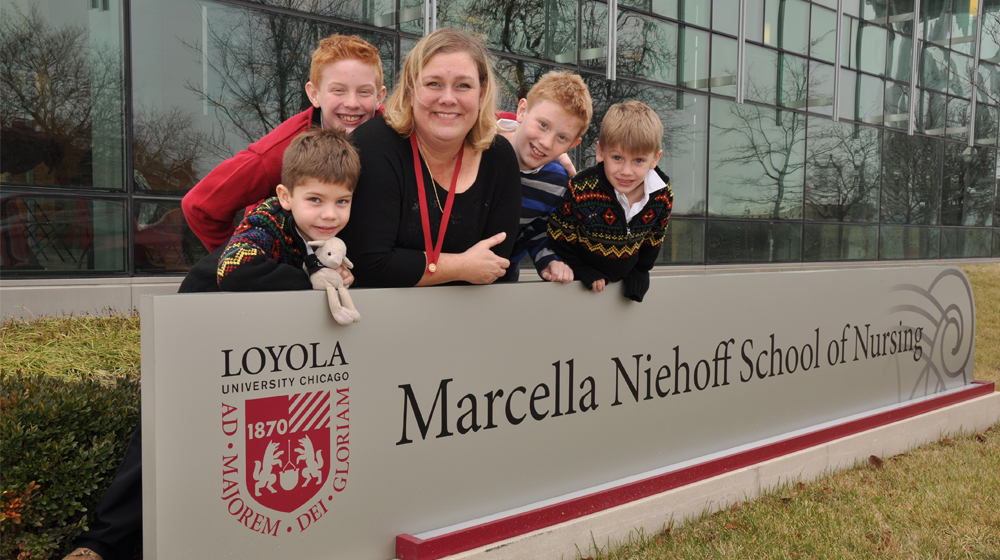 Lynn Anne Gantt poses with her four boys Dec. 12 after receiving her accelerated bachelor’s of science in nursing degree.

MAYWOOD, Ill. (Dec. 15, 2014) – As a biomedical engineer, Lynn Anne Gantt longed to work on the frontlines of patient care. After having four boys, she took a break from engineering before discovering an outlet that would allow her to pursue her dream.

Gantt’s time in the program was not without challenges. She was newly single with four young boys when she enrolled at Loyola. Her youngest child was just 3 years old. But this busy mom found a way to balance it all. She went to class and clinical experiences during the day while homeschooling her boys and finding time for her own studies at night. Gantt relied heavily on her mother and sister who took turns cooking, educating and caring for her boys while she was away.

“It was an intense time trying to negotiate my clinicals with classwork and family demands. I couldn’t have done it without the support of family,” Gantt said. “I also am grateful to my professors and classmates who made my experience worthwhile. Loyola’s Jesuit traditions and emphasis on compassionate care are something I will carry with me as I become a nurse.”

Gantt is finally realizing her dream. She graduated this month to pursue a position in critical-care nursing in the Chicago area. She was selected by her peers to speak at Loyola’s Honors and Pinning ceremony Dec. 12 at Loyola’s Health Sciences Campus in Maywood. This long-standing tradition represents the transition from student to nurse.

“While it’s true that we arrived on campus as separate, distinct individuals, we have now become unified in purpose, grown in compassionate skillful care and become transformed into men and women who will extend the healing ministry of Christ in the lives of those we meet with kindness, quality care and dignity,” Gantt said, as she welcomed 62 of her peers into the nursing profession. “I am extremely proud of each of you, and I have great confidence in the future of nursing.”

The following awards and honors were presented during the ceremony:

Dean’s Gold Key Award: Malaika Dent
The highest academic award, presented to a graduating student for excellence in scholarship, service and leadership. This student exemplifies the highest ideals of the University as a nurse and a citizen.

Nursing Alumni Award: Mary Beth Webb
Presented to an undergraduate nursing student who best exemplifies a commitment to excellence, values-based leadership, and service both to Loyola and the community while promoting fellowship among peers.

Laura Difiglio Klink Scholarship: Andrea DeFelice
Memorializes Laura Difiglio Klin, an ABSN student at Loyola devoted to learning how she could provide the best care to patients. Her efforts ended prematurely at age 31 in a fatal accident caused by a drunk driver.

Carol Kraft Memorial Award: Jessica Guerrieri
Given to a senior nursing or graduating ABSN student who best exemplifies excellence in the practice of nursing at the completion of clinical experience at Loyola University Medical Center.

Julia Lane Silver Key Award
Given to graduating ABSN students who have achieved a cumulative GPA of 3.8 or higher:

View photos of the event here.