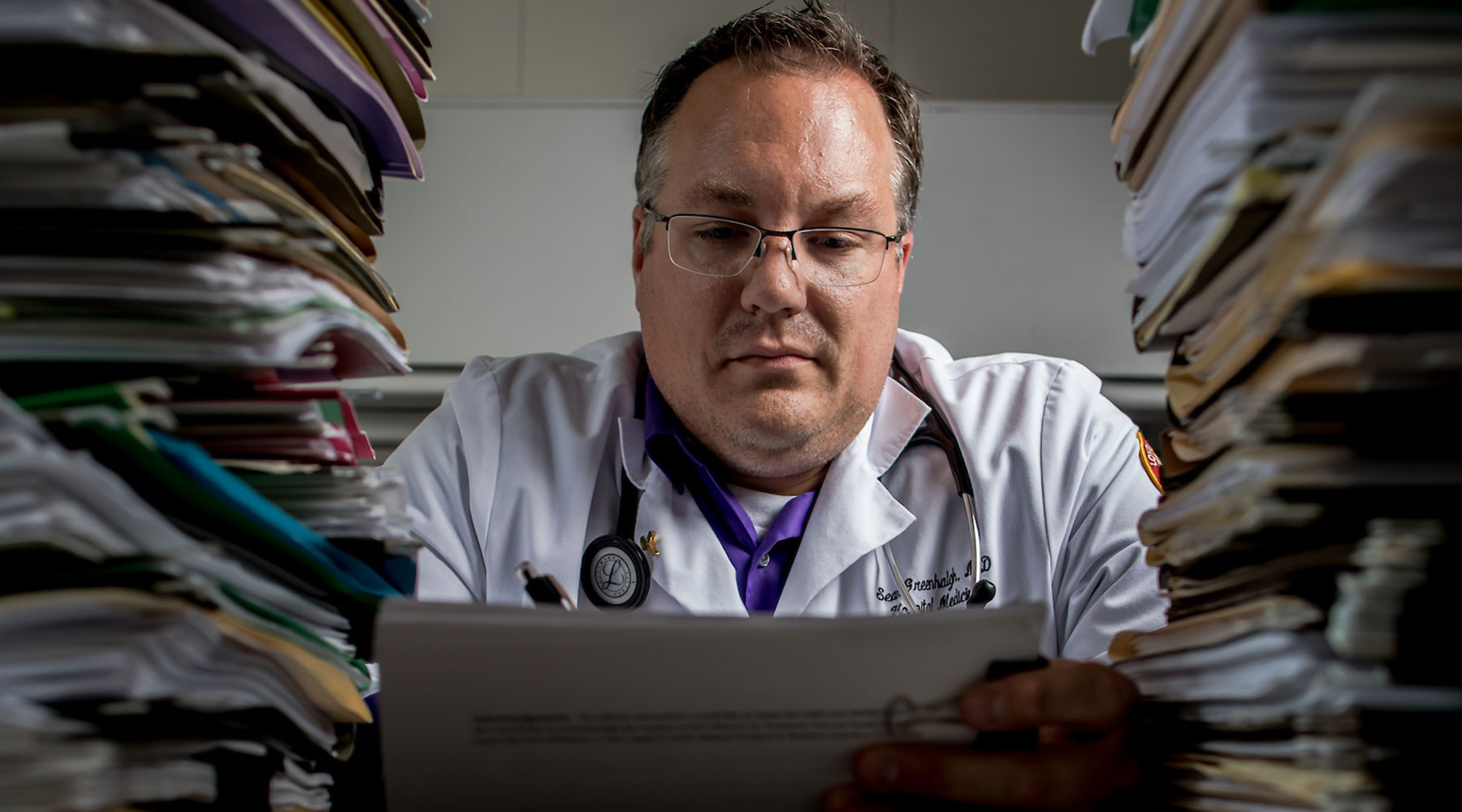 Hospitalist Sean Greenhalgh, an associate professor at Loyola's Stritch School of Medicine, is adamant that the medical field could use more education and speak more openly about occupational burnout—something he himself experienced as a young doctor.

The battle against burnout

The wave hit hospitalist Sean Greenhalgh during his second year on the job. His department was overburdened, faced with too many patients and a constantly ticking clock. He and his fellow hospital doctors couldn’t even carve out 30 minutes to congregate over sandwiches and vent their frustrations. “I wasn’t doing the parts of the job that I enjoyed—sitting and talking to people, taking a deep dive,” he remembers. “It became about survival.”

His personal life was no less strained—Greenhalgh’s wife had delivered their first child a year prior, and another was on the way. He brought paperwork home with him, sprawling files across the kitchen table, worrying that every upcoming admittance would overwhelm him. Then he’d wake up panicked late at night, wondering if he’d logged a stray order incorrectly. All he could do was trudge downstairs to his laptop, bleary-eyed, and check again.

Every hour that Greenhalgh spent fretting was another he couldn’t rest or help his wife; he feared he was failing at both parenthood and medicine, two things he desperately loved. In moments of real weakness, he would daydream about teaching high school biology, before remembering he still owed some $200,000 in medical school loans. (Paying those down on a teacher’s salary wasn’t a realistic option.) He felt stuck, convinced he was the only person in the medical center wracked with self-doubt. Worst of all, he started to feel uncaring towards the patients who truly needed his help.

Nearly a decade later, Greenhalgh, an associate professor of hospital medicine at Stritch, understands he was a suffering from medical burnout. At the time, he couldn’t diagnose it. His instructors in medical school and residency had rarely mentioned the possibility. Neither had his bosses. It took an intervention from a few observant coworkers and a long-requested expansion of the hospitalist team, which eventually eased his workload, for Greenhalgh to realize how deep a funk he’d fallen into.

Occupational burnout is not a new phenomenon, nor is it limited to health care. But it’s a condition that doctors and nurses can feel acutely, with serious ramifications for themselves and the communities they serve. Although the triggers are specific to each individual, there are common threads running through most cases: excessive hours, staffing shortages, workflow inefficiencies, bureaucratic hurdles, emotional exhaustion. Put another way, if a provider loses autonomy or a sense of meaning on the job, burnout tends to follow.

Doctors are often driven, competitive people. And medicine, even on the easiest days, is a tough nut to crack. “This is a humbling profession because you’re never going to know everything,” says Gregory Ozark, director of faculty development and formation at Stritch and vice president of graduate medical education at Loyola University Medical Center. “It drives you to work very hard, but you rarely feel like you’re doing enough.”

According to Ozark, every doctor floats along a so-called burnout spectrum. At first, doctors might lose their patience or focus more than they’re used to, making the occasional mistake. Job dissatisfaction, in turn, grows. In its most aggressive form, burnout can seriously shake one’s self-worth, sparking depression, anxiety, substance abuse, or suicidal ideation. It’s fueled further by the pressure that health care providers place on themselves, fairly or not.

“Medicine is a spiritual calling for a lot of us,” Ozark says. “You want to be the best person for your patients. It can lead you into a relentless chase for perfection, one that’s never attainable.”

‘“Medicine is a spiritual calling for a lot of us. You want to be the best person for your patients. It can lead you into a relentless chase for perfection, one that’s never attainable.”

Rates of medical burnout are on the rise nationally; surveys have shown that over 50 percent of practicing physicians meet at least one criteria in a given year. Burnout has even funneled into residency and medical school programs, afflicting health care newcomers who are eager to prove themselves but not yet able to contextualize their experiences.

One Loyola study presented this spring at the American College of Physicians Internal Medicine Meeting found that 16.3 percent of medical students showed signs of major depression, while another 9.4 percent of respondents reported thoughts of self-harm.

The search for sustainable solutions has ramped up in kind; Ozark jokes that he’s burned out thinking about burnout. “It was taboo to talk about it before,” adds Ramzan Shahid, a pediatrician at Loyola Medicine and an associate professor at Stritch. “Now there’s more awareness.”

As a Jesuit institution, both Loyola’s medical school and the broader hospital system have a natural concern for protecting against burnout, already taking a proactive approach to addressing the issue. That said, Stritch hasn’t stopped looking for ways to bolster its offerings.

Ozark has played an integral role. Since 2016, he’s collected an annual burnout survey, canvassing surgeons, radiologists, and pediatricians to ferret out “how big of a problem we’re dealing with, and then what are the physical limitations and realities we are encountering.” That data is condensed and shared with department chairs in an effort to identify the most consistent complaints. He’s also convened a resilience committee, a cohort of doctors and practitioners who meet regularly to swap stories and debate best practices. 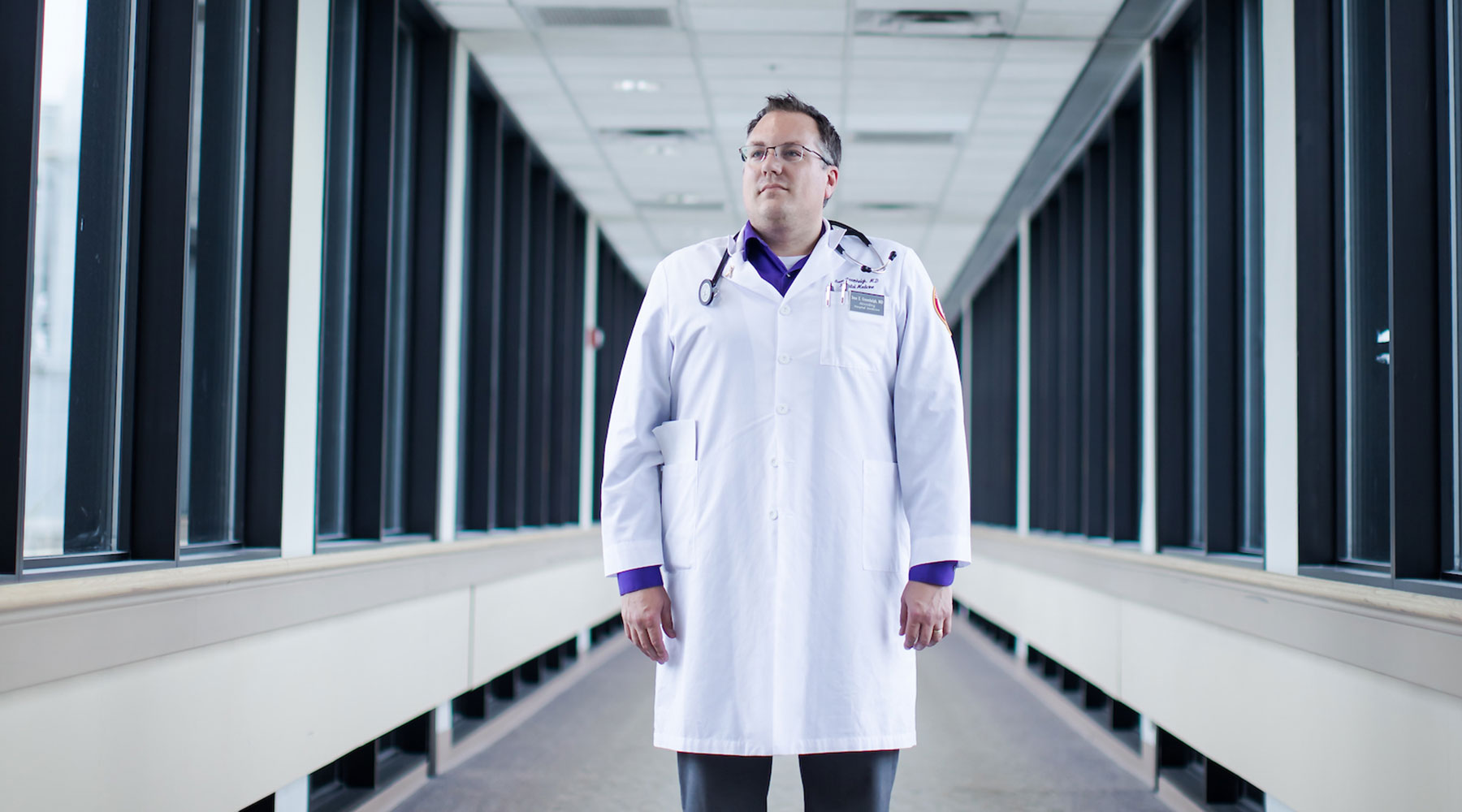 Sean Greenhalgh is among the faculty at Stritch working to help fellow doctors who may be experiencing burnout.

These conversations have produced tangible results: adjustments to the hospital benefits plan; the addition of a physician’s lounge; and the creation of a distressed physicians group, whose members (including Greenhalgh) serve as “first responders” should a colleague need burnout-related support. Ozark claims his initial interest was selfish: “I’d seen some of my peers and mentors struggle with it. Some had even left the profession. You want to know what kind of obstacles they encountered so you can avoid it yourself.”

At Stritch, administrators are fielding applications for a faculty member whose job title will explicitly include the phrase “wellness,” a first for the school. The hope is that the new hire will build out the wellness program in a way that’s much more focused. In the meantime, the administration has instituted a pass-fail grading system for first- and second-year students, giving those acclimating a chance to absorb the heady material without feeling preoccupied by letter grades. A student-run wellness and efficacy group organizes restorative activities for stressed peers, too. And faculty members try their best to explain how medical systems work in the real world, so students can advocate for themselves when they’re flung into it.

“These students need to be successful for the next 40 to 50 years of their life, when they are functioning as physicians,” says Gregory Gruener, vice dean for education. “We want people to know their limits and their red flags, to know themselves, and to know what to do when they face a tough situation.”

To that end, Shahid is investigating the role that emotional intelligence (EI) can play in staving off the worst effects of burnout. A person with fine-tuned EI is equipped to identify and manage their own complicated emotions. And it’s a skill that can be taught. For a study Shahid published in the journal Advances in Medical Education and Practice, he recorded baseline assessments of EI for more than two dozen Loyola residents. Those residents then took part in a pair of two-hour workshops—with lectures, group activities, and videos. A few months later, they retook the survey.

Shahid found that his brief intervention boosted the group’s overall EI levels; scores for stress management, stress tolerance, and wellness all jumped as well. He doesn’t see why basic EI training shouldn’t be included in medical school curriculums nationwide. “A person with high emotional intelligence can recognize when they’re feeling stretched,” he says. “They have the awareness to manage it effectively by doing something—exercise, music, prayer—that will reenergize them.”

Greenhalgh, too, is adamant that the medical field could use more education on, and speak more openly about, the rise of burnout. After presenting on the topic for his Grand Rounds five years ago, he now gives talks to doctor groups about his own battles with stress and the need for institutional reform. He’s cautiously optimistic that Ozark and other Loyola colleagues are taking real action.

It’s been a while, in other words, since Greenhalgh thought about trading in his scrubs for a high school biology textbook.