Research from the ground up 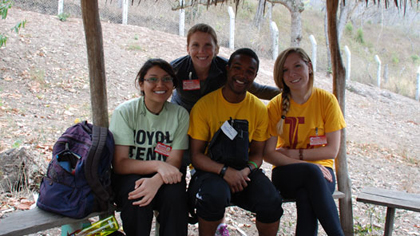 It was the culmination of a year of work when seniors Natalia Hajnas, Jacob Marshall, Elizabeth Esparza, and associate professor of clinical psychology Amy Bohnert, PhD, went to Honduras in March of this year. They had spent the year coming up with a research proposal to examine depression, anxiety, chronic pain, and spirituality among rural Hondurans and forging connections that would help get them into Honduras.

“Virtually nothing is known about these issues including by those who are providing medical care for these patients,” says Bohnert.

Hajnas and Marshall have worked in Bohnert’s lab since their freshman year. The idea for the project was Hajnas’s. She had been on several Global Medical Brigades trips in the past (two in Panama and one in Honduras) and was looking for a way to do more for the people the organization serves.

“The one thing that stood out to me was pain and why people experience it,“ Hajnas says. “It’s not always physical. What if physical pain was exacerbated by mental illness or stress?” Marshall had also gone on a Global Brigades trip, and, like Hajnas, he believes that health should be looked at from a physical and a mental angle.

Getting the project off the ground was daunting.

“I did not know what to expect,” Hajnas says. “At first it seemed too big to handle—my idea for what I wanted to do. I didn’t know how I’d be able to.” Hajnas had never conducted research in another country before. “It was a slow start,” she says.

The Loyolans met with Global Medical Brigades’s co-founder and CPO, Dr. Shital Vora, who was excited about their interest in mental health. They then worked closely with Global Medical Brigades personnel in Honduras to prepare and coordinate data collection efforts. The project also received a research support grant from Loyola’s Office of Research Services. Under the supervision of a fourth-year clinical psychology graduate student, Amanda Ward, and Bohnert, the undergraduates created a survey to address their questions using recently developed NIH-sponsored instruments.

In March, Bohnert, Esparza, Hajnas, and Marshall went to the rural mountainous region of El Canton. They surveyed 131 adults, ages 18-90, who were seeking medical services provided by Global Medical Brigades. The interviewers asked about pain and its relationship to mental health, as well as about spirituality and religiosity. They asked about symptoms of anxiety and depression, daily work load, stresses related to parenting, and social support.

Marshall says the experience was a new and valuable one. “In the past I’ve worked off previously collected data; this was the first time I collected my own,” he says. “This was a top-to-bottom research project, and I’m grateful to have been involved from the beginning.”

Preliminary findings suggest that those who reported higher levels of social isolation had more symptoms of depression and anxiety, and that those reporting higher social satisfaction had fewer symptoms. The survey found no direct relationship between spirituality and depressive symptoms, but it did indicate that spirituality may serve to buffer the relationship between various stressors and anxiety and depressive symptoms.

Bohnert plans to present these findings at a conference and publish several papers with these students. “I have never been more proud to be a member of Loyola’s faculty than I was watching these students,” Bohnert says. “It was inspiring to be able to see this project that they were so invested in for years come to fruition.”