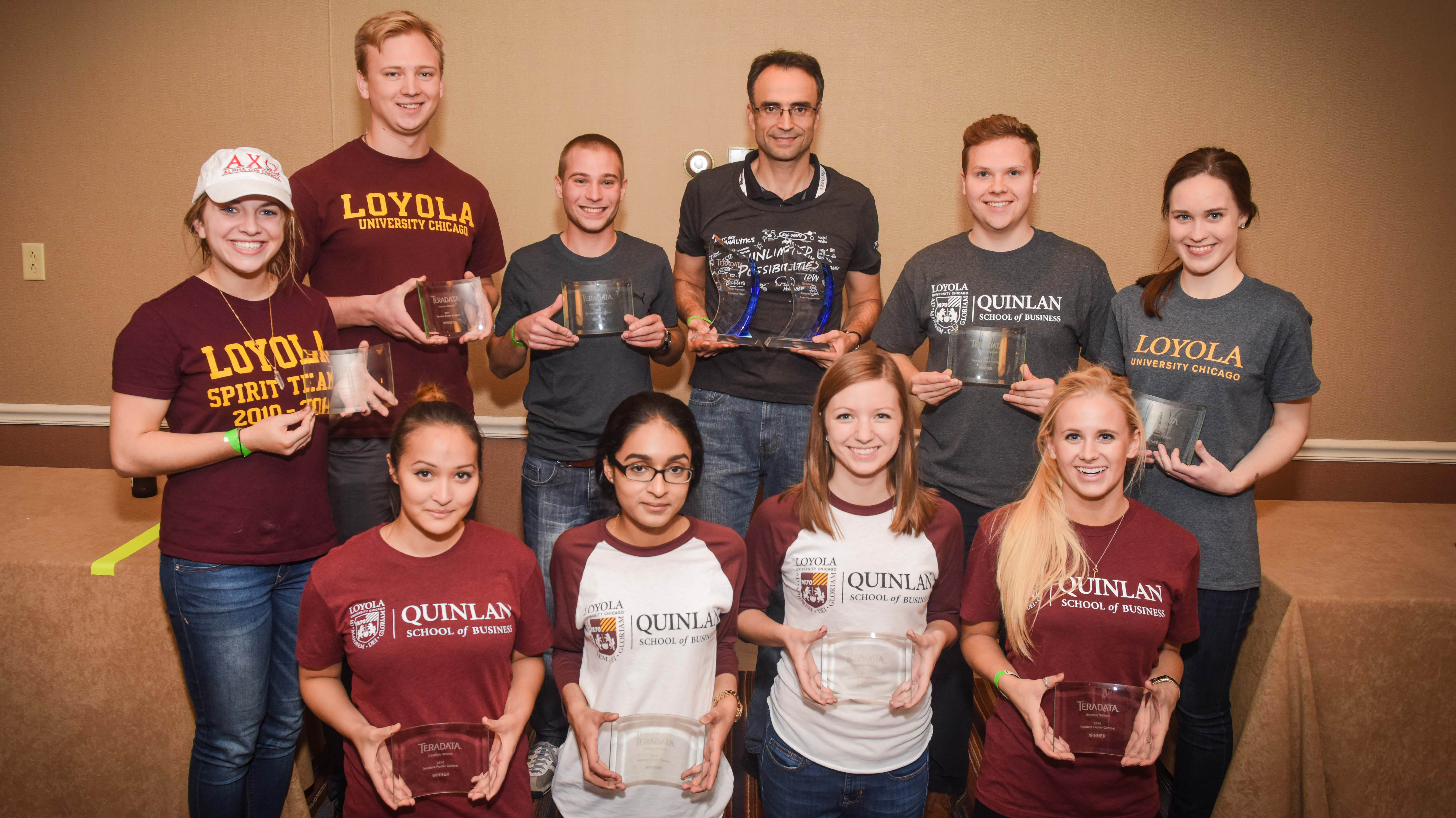 Everyone loves a good underdog story.

For a handful of Quinlan students competing at Data Driven: Teradata 2014 Partners Conference and Expo in Nashville this past October, underdog is an understatement.

The two Quinlan teams, composed mostly of undergraduate students, took home two out of three awards at one of the nation's largest data analytics and technology conferences—beating out teams of MBA and PhD candidates from Oklahoma State, Maryland, Emory, Georgia Tech, and Cornell, to name just a few of the many universities competing. Best of all, it was a completely democratic process, with the audience of several hundred, including Fortune 500 executives, voting via a smartphone app.

"Our teams presented flawlessly," says Professor Nenad Jukić, who served as the coach. "They pitched professionally and answered every question shot at them as the well-studied, cool-demeanored professionals that they are. The audience responded to that."

The first team—made up of Rory Dayton, Vasyl Ilchyshyn, Madeline Mills, and Natalie Perkins—analyzed Felice's, Loyola's student-run pizzeria, to win the "Most Practical/Business Value" award. The project was a study in data consolidation—an analysis and restructuring of the database system used in tracking Felice's finances. Ultimately, the yield was extra savings and a realistic waste-minimization plan for the organization, with an outlook as far as 2017.

"We focused on how our implementation would be a value-add for Felice's," says Dayton, the team's captain. "While our analysis also touched on the theory and methodology behind our work, we knew that the judges would be evaluating us as if we were consultants, and you can't win a client if you don't show how the business will benefit the organization long term and as a whole."

The second team—made up of Emily Edkins, Naznin Larya, Matt Soroczak, Laura LeBeau, and Sarah Mucerino—examined how to maximize marketing and funding for Kids With Autism Can, for which the Quinlan students won “Best Presentation.”

“We asked stimulating questions about issues that go beyond business and data analytics,” says Edkins, who served as her team’s captain. “They’re questions about society and using creativity to solve social challenges. I knew the implications of our work and the mission of Kids With Autism Can were important, and I wanted to do justice to our team’s work.”

Needless to say, Jukić—named Loyola Faculty Member of the Year this September—was thrilled with the students’ success. Moreover, the news follows the latest rankings from U.S. News & World Report, which places Quinlan as the No. 1 undergraduate business school in Chicago.

“This competition really sheds light on the kinds of young professionals we’re preparing here at Quinlan,” Jukić says. “We focus on making sure our students get the knowledge and skills to be highly competitive in the job market while making sure they also understand not just business practices but also the importance of ethical conduct and responsible leadership.”