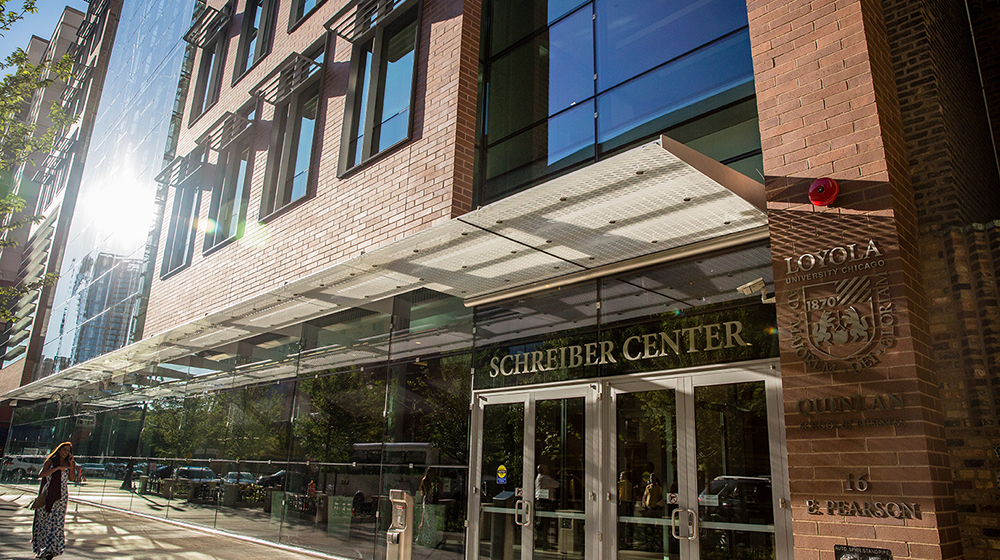 The Blackstone gift honors the leadership of alumnus John Schreiber. Quinlan's Schreiber Center, which opened in 2015, was named in honor of John and Kathy Schreiber.

The gift, which was announced in February 2016, honors Loyola alumnus John Schreiber and his many years of leadership and service to Blackstone.

“John Schreiber co-founded our real estate business and has been instrumental in its success,” says Jon Gray, global head of real estate and a member of Blackstone’s Board of Directors. “We could think of no better way to honor John on the occasion of his retirement than establishing the Blackstone Scholars at the Quinlan School of Business.”

The Blackstone Scholars at Quinlan, created with a $1,025,000 gift from John’s friends and colleagues at Blackstone, will establish an endowment at the Quinlan School of Business to support students with the greatest financial need. The scholarships will be awarded annually and will significantly reduce student loan burdens on the scholars.

“The Blackstone Scholars at Quinlan will be an important new program at the Quinlan School of Business and will continue the Loyola legacy of making a world-class education affordable,” says Kevin Stevens, Quinlan’s dean. “On behalf of the Quinlan community, I would like to thank John Schreiber for his lifelong commitment to Loyola and thank Blackstone and the Gray Foundation for their generosity.”

The Quinlan School of Business is located in the new Schreiber Center, an innovative and sustainable 10-story facility located on Loyola’s Water Tower Campus. The Schreiber Center was named in honor of a $10 million gift to Loyola University Chicago by John and Kathy Schreiber.

“It has been a wonderful opportunity to be a part of Blackstone,” says John Schreiber. “I am honored by the extraordinary support of my colleagues, and I am thrilled that the Blackstone name will become synonymous with promising young students at Loyola.”