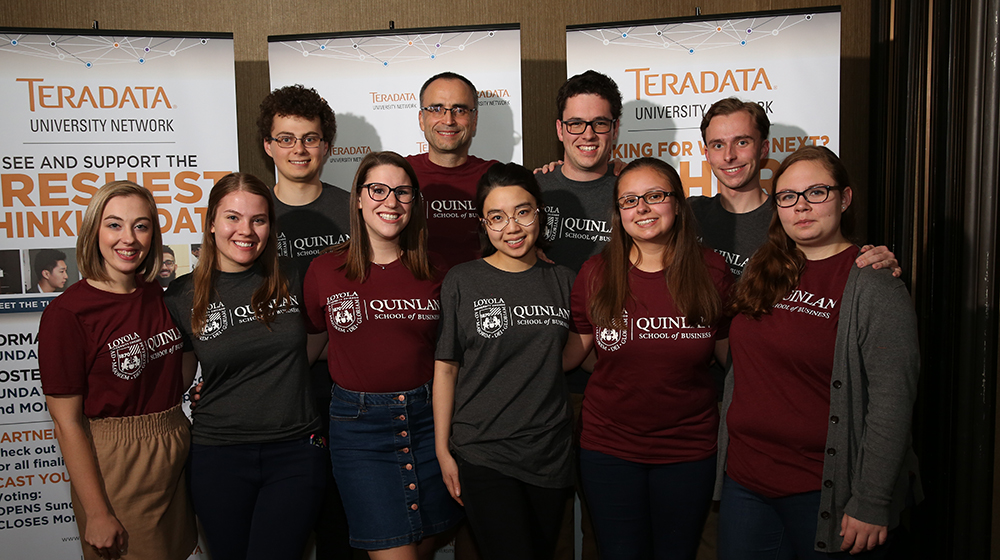 Two teams of undergraduate Quinlan students bested teams from around the world to emerge victorious at the 2017 Teradata Partners Conference.

Their awards build on a history of success: This is the fourth year in a row that a Quinlan team has won “The People's Choice Award for Best Presentation," and in 2014, another Quinlan team won a "Most Practical/Business Value" award.

The Teradata Partners Conference brings together more than 3,000 technology professionals from more than 900 companies in 45 countries. The conference prominently featured two student competitions sponsored by the Teradata University Network: the Data Challenge Competition and the Business Analytics Competition.

Students selected for the competition finals had the opportunity to showcase their findings through both formal presentations and poster sessions. Professors Svetlozar Nestorov, Abhishek Sharma, and Nenad Jukić advised both teams.

“The opportunity to present their work at a large professional conference such as Teradata Partners is invaluable for our undergraduates,” says Nestorov. “The interactions with technology professionals and top executives of Fortune 500 companies can boost their confidence and inspire their future careers.”

The competition was a culmination of nine months of hard work by the students, starting in January 2017 when they began working with real world datasets provided by Rise Against Hunger and GE Transportation.

In the Data Challenge competition, all student teams were provided with the same datasets and questions from Teradata's nonprofit partner Rise Against Hunger. The teams analyzed the data and business question provided and presented their findings and results. The members of the Quinlan team were Teresa Davies, Alex Matheis, Robert Rice, and Justin Hopp.

The team, one of nine finalists, won the award for "Most Value to Rise Against Hunger," voted on by the members of the Rise Against Hunger organization and given to the team that comes up with the most actionable and impactful recommendations.

“The award perfectly matched the team’s goal to provide practical insights into the business of fighting hunger that can be implemented quickly and effectively,” says Nestorov.

Watch the students describe their insights and their process below or on Vimeo.

In the Analytics Challenge, student teams were invited to present their analytics business research or application cases on a topic of their choice to professionals in the business analytics community. The members of the Quinlan team were Faith Hemingway, Tessa Boukal, Amelia Jerkatis, Erin Morales, and Hexianzi Zhang.

The team, one of ten finalists chosen to present, won "The People's Choice Award for Best Presentation," voted on by all participants at the conference.

They presented their work on analyzing sensor data for locomotive testing from GE Transportation. Read about the project →

Watch the students explain their project and outline their career goals below or on Vimeo.