Paul La Schiazza, AT&T Illinois president, addresses the crowd at Tuesday’s CEO Summit on corporate social responsibility. “How we do business is just as important as what we do,” he said. (Photo: Natalie Battaglia)

The summit kicked off Quinlan’s Signature Series of events.

The panel and guests discussed the impact of corporate social responsibility on business, government, and education, and the benefits to balancing shareholder and stakeholder interests.

“This is the core of Quinlan’s Jesuit-inspired commitment to social responsibility and ethical leadership,” said Kevin Stevens, Quinlan’s dean, during his welcoming remarks. “Discussions like this distinguish Loyola.” 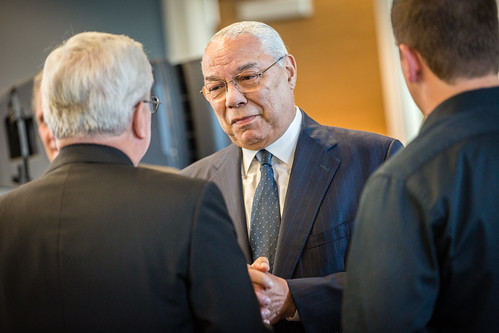 Photo gallery: View the photos in the gallery above or on Loyola's Flickr page.

In his remarks, La Schiazza said the summit’s focus on corporate social responsibility was important, timely, and to him, inspiring.

“That’s because how we do business is just as important as what we do,” he said. “Living up to the highest standards of honesty, integrity, and respect is the most important commitment we can make—to each other, our customers, our business partners and our shareholders.”

According to La Schiazza, good corporate governance is a necessary foundation for ethical and responsible business practices and directly relates to business success.

Powell focused on purpose, saying that every business needs to think beyond its business goals and consider how to improve the community around them.

“It can’t just be about making profits,” he said. “You have to embed corporate social responsibility in the DNA of the company. It has to be part of the lifeblood of a company, and it starts at the top.”

He stressed the importance of continued involvement, challenging businesses to “Get involved and stay involved.” To drive home the idea, Powell recounted the story of US Senator Ted Kennedy volunteering an hour of his time each week to read to elementary students.

Panel moderator Pamela McCoy, a Quinlan associate dean, asked panelists to discuss how industry, government, and academia can collaborate to positively impact the common good of our local and global communities.

“Schools need to focus on that social responsibility is just good business,” Wehmer said. “Your reputation takes years to build, but it can be lost in a second due to one bad decision.”

Parkinson, (BBA ’73, MBA ’75) and chairman of Loyola’s Board of Trustees, stressed that conversations between the different entities are critical, and he encouraged more dialogue among them. Budnik said there are many challenges to collaboration, including how government decisions on spending can negatively effect educational institutions.

A day of celebration


The CEO Summit was part of a full day of celebrations for the Schreiber Center, Quinlan’s new home on Loyola’s downtown campus.