The Information Systems and Supply Chain Management (ISSCM) department welcomed some 80 alumni and friends to its annual department celebration in March.

View photos from the awards reception in the gallery below or on Quinlan’s Flickr page. 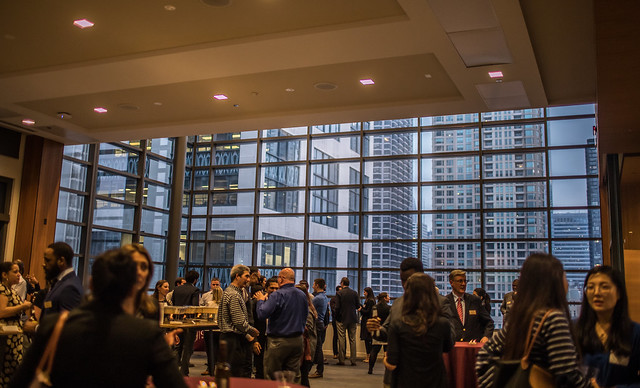 About the award winners

Ashley Pradhan studied information systems and marketing and graduated with honors. Since joining the technology consulting firm Aptitive in May 2016, she has been promoted five times and is now a level II senior consultant focusing on helping lead the data science practice. She piloted the company's annual (data) Science Fair, which is a showcase of the latest technologies in the data space. The event has hundreds of attendees and is sponsored by companies including Snowflake and Microsoft.  With the support of Aptitive's training fund, she is currently completing an online Financial Technology certification program at Harvard University.

Alex Stoll received a bachelor's degree in finance and master's in supply chain management at Quinlan. He now works for Maersk, an international shipping and logistics company based in Copenhagen, Denmark. He began his career at Maersk as a trade analyst in New Jersey, looking after exports from North America to the Far East. He subsequently took a role as an assistant product manager based in Copenhagen. Now he works as a pricing manager in Dubai handling exports leaving the Arabian Peninsula and Indian Subcontinent to the Far East, Oceania, and Europe.

Vikrant Viniak is a managing director at Accenture Strategy and leads strategy consulting for the high-tech practice globally. He has more than 18 years of experience in driving transformation and coaching C-suite clients through these transformation initiatives. His expertise includes leading use of digital, analytics, and AI (artificial intelligence) to drive value for clients. Over the course of his career, he has led several transformations leading to savings of billions of dollars for his clients. Vikrant is passionate about people development, mentoring, and coaching. He has several publications on the topic of blockchain, analytics, and competitive agility