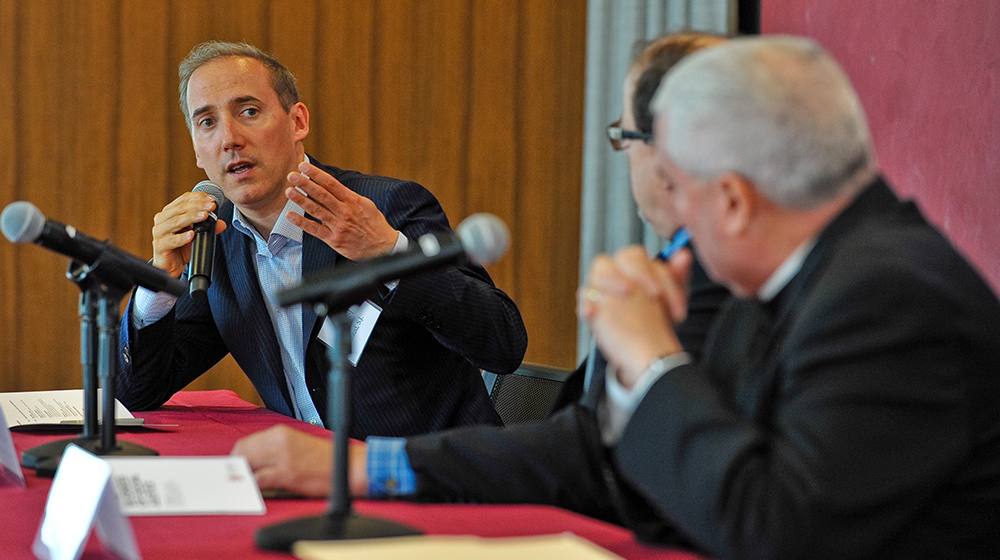 Speakers sought to answer the question, “Can business help create a just world?” in light of Pope Francis’s harsh critiques of modern capitalism.

Leading French economist Gaël Giraud, S.J., was the featured speaker, with a panel comprised of Monsignor Michael M. Boland, president and CEO of Catholic Charities of Chicago, and Michael Schuck, professor of theology at Loyola.

“We here at Loyola are firmly committed to social justice,” said Stevens. “Faculty and staff at Quinlan live this mission by partnering with social enterprises—organizations that do good and make money at the same time.”

Garanzini then called attention to the international Society of Jesus report, “Justice in the Global Economy: Building Sustainable and Inclusive Communities,” and the issues highlighted in the report.

“The political and social instability caused by the careless and inhuman acts of tyrants and fanatics has its consequences, not only in faraway places, but sometime in our streets as well,” he said. “We’re foolish to think we can do nothing about it or that the causes of these phenomenon are not interrelated with the way we live, the way we eat, and the way we work on this side of the globe.”

Energy drives economic growth, Giraud said, but when developing countries increase their carbon output, it has repercussions across the globe.

“Climate change is a serious problem we can’t ignore,” he said. “If we don’t do anything, major cities will be underwater by the end of the century.”

Even if carbon emissions cease globally, the Earth is still on a warming trajectory. Giraud said scientists suggest an increase of more then two degrees would have dire consequences for communities around the world, especially in Africa.

Schuck used the trope of a papal serial novel to describe the story of economic justice, as told by papal encyclicals. The “novel” begins in the 1890s, with Pope Leo XIII’s Rerum Novarum, which tells the story of the conflict between workers and industrial business owners in a market economy. The novel’s latest installment is Pope Francis’s Laudato Si’ and the theme of unprecedented environmental deterioration and the need for a sustainable model of production.

“It’s been wonderful to see Pope Francis speak so deeply and so passionately about the concerns of the poor,” Boland said as he closed out the event. “One out of three people in Chicago come to Catholic Charities for help every year. So we realize that the church’s social teachings are lived at Catholic Charities every day, and we have the privilege of working with Loyola, which has done so much over the years.”

In the evening, another 65 students and others gathered for a panel discussion on redressing economic inequality. The panel featured Giraud, Nicki Pecori Fioretti, MBA ’96, of the Illinois Housing Development Authority, and Quinlan professors Timothy Classen, Tassos Malliaris, Linda Tuncay-Zayer, and Clifford Shultz.

Quinlan’s Signature Series will continue next year, with a continued focus on economic inequality.

View photos from the event in the gallery below or on Quinlan’s Flickr page. 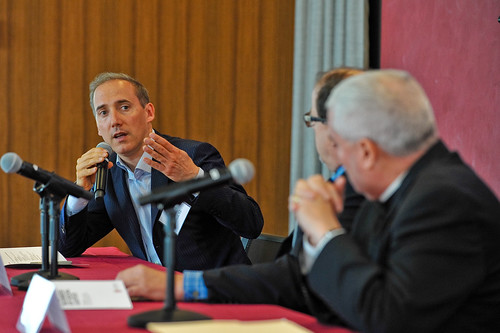