Small businesses in the Chicago region have growing optimism, plus plans to expand, according to the 2018 Small Business Outlook Survey. This is important as 46 percent of Illinois’ private sector workforce–2.4 million people–are employed by a small business.

The annual survey has been conducted by the Chicagoland Chamber of Commerce and Quinlan since 2014. For the 2018 survey, Quinlan graduate marketing students under the direction of assistant marketing professor Alexander Krasnikov, PhD, were engaged during all stages of the project, from survey development to data collection and interpretation.

“We want to extend a really heartfelt thank you” to the students, said Stacey Pitts Caldwell, director of the Chicagoland Chamber of Commerce’s Small Business Development Center. “It’s one thing to do a survey, and it’s another thing to really collaborate with such great minds to do the analysis.”

Watch a video summary of the 2018 survey results or read the key results below.

“The results of the survey are very encouraging,” said Chicagoland Chamber President and CEO Jack Lavin. “Small businesses’ strong increase in confidence in the Chicagoland economy points to an environment where they’ll be investing in their operations. This creates opportunity for businesses of all sizes, and for every worker.”

The survey results were revealed at a reception on Wednesday, January 24, at the home of the Quinlan School of Business, the Schreiber Center on Loyola’s Water Tower Campus.

View event photos in the gallery below or on the chamber’s Flickr page. 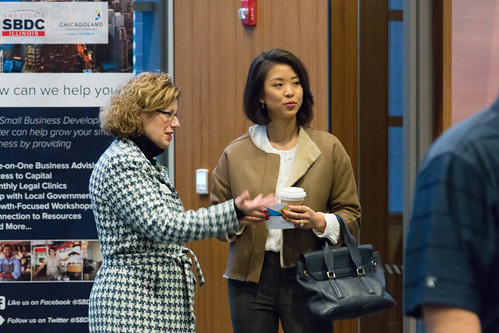 Survey in the news