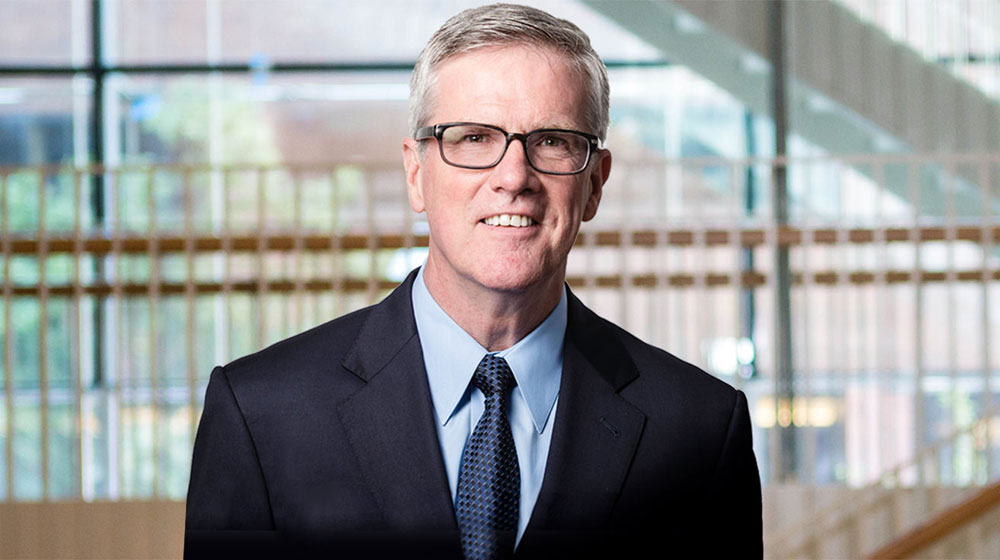 Kevin Stevens understands challenge. The fifth of 12 children of a Chicago police officer and a special education teacher, Stevens worked his way through his Loyola undergraduate education over nine years. Among his jobs: CTA ticket agent, gas station attendant, and janitor.

Nearly everything he saved went toward his education, but even then, he had to drop out of college for several years before saving enough to return.

“I experienced firsthand how easy it is—and how discouraging it is—to fall behind. It’s crushing,” said Stevens. “A lot of hard-working, smart kids end up dropping out of school, because they are juggling so much. I had teachers and administrators who believed in me and that made all the difference.”

After earning his degree in political science, Stevens taught American and English literature and grammar at Mount Carmel High School on Chicago’s South Side. Soon, he was back in school to earn two master’s degrees and a doctorate in business administration, specializing in accountancy.

Here, Stevens talks about his journey to Loyola and his vision for Quinlan.

Finishing your undergraduate degree wasn’t easy. What motivated you to keep going?

Stevens: I always wanted to be a teacher and needed the degree to do that. Teaching is really a vocation, a calling. Not everyone can do it. The word “education” comes from the Latin “educere,” meaning “to draw from.” That’s what really good teaching is: it’s the teacher asking the student, “What do you think?” and “What’s holding you back from understanding this?” Just trying to transfer knowledge to a student doesn’t work.

A great teacher’s job is to find the kernel of interest in any subject and inspire students. Nothing is intrinsically dull, even in accounting. There’s a story behind everything.

What excites you about serving as Quinlan’s dean?

Stevens: Loyola’s chancellor, Father Garanzini, offered a really intriguing challenge. He asked, “What should a great Catholic, Jesuit business school look like?” Quinlan is already a great school, but what can we do better? With our mission in mind, how can we best serve our students and the business community? I really believe that the business world is looking for well-rounded people who think critically and have a strong moral compass. Catholic schools aren’t the only place to develop these skills, but we are uniquely positioned to do so.

From your vantage point, what makes Loyola’s Quinlan School of Business different?

Stevens: When businesses hire a Quinlan graduate, they gain a talented worker with distinctive skills. Every decent business program provides its graduates with the technical skills they need. But Loyola graduates have a broad liberal arts education and a targeted business education. They know how to think critically and to be responsible leaders.

We are also committed to partnering with our alumni and the business community. We want to provide the education you need for yourself and your employees, from degree programs to executive education and beyond.

And finally, what hobbies do you have outside of the University?

Stevens: My family and I are outdoorsy people. I used to run marathons before my arthritic hip put a stop to that. I ran 10 marathons, including Boston twice. Now I ride my bike a lot with my sons. I love to travel and am unafraid to try to communicate with anyone using my little phrase book. Often it’s disastrous, but it’s a lot of fun. And of course, I’m a huge White Sox fan, as befits the son of a Chicago policeman.

Read the announcement of his appointment