Classen was one of three featured speakers at Q Talks, which also featured Professor Jenna Drenten on how visual social media is changing communication and Professor Al Gini on the importance of humor. Q Talks is part of the Dean’s Alumni Series.

Origins of the opioid crisis

In 2001, the Joint Commission on Accreditation of Healthcare Organizations identified pain as the fifth vital sign along with blood pressure, heart rate, respiratory rate, and temperature.

The commission argued that “we need to treat pain in a better way to reduce patients’ pain and to deal with problems stemming from patients’ pain,” said Classen. But “that really was I think in some ways a jumping-off point for the use of painkillers.”

Scope of the opioid crisis

Several policies have been introduced to respond to the crisis, including:

Classen closed his presentation with a series of questions. “At Quinlan, we do focus on ethical business behavior, and here are some things to ponder,” he said.

To learn more about the opioid crisis, Classen recommends these resources:

View Q Talks photos in the gallery below or on Quinlan’s Flickr page. 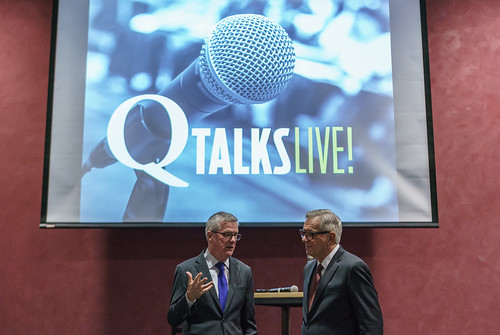