That’s what Quinlan sophomore Rachel Taylor had to say at the end of the Quinlan Case Competition, an annual contest that puts undergraduate students’ problem-solving skills to the test before a panel of Loyola alumni and business leaders.

Her team, Coast to Coast, returned for a second year of competition on Monday, October 5, and emerged victorious over a record-breaking 90 students from 23 teams.

The students had only four days to translate their classroom knowledge into a real-world business solution for a case focused on a sustainable supply chain for IKEA.

The following teams were awarded cash prizes for their insights and recommendations:

* The Lawrence Metzger Award for Excellence recognizes the highest scoring team made up of all first-year or second-year students.

Quinlan’s case completion is unique as it is open to undergraduate students from every school and discipline. Quinlan Student Services Coordinator Alex See, who coordinated the competition, said that competitors ranged from one of the 11 business majors that Quinlan offers to students with majors in psychology, math, and English.

But the competition is especially valuable for business majors, as case analysis is quickly becoming a standard practice in job interviews.

The competition officially began on Wednesday, September 30, when students were provided with a 22-page Harvard Business School case study. Teams had to analyze IKEA’s growth in relation to a sustainable wood supply chain, and present their solution to the judges the following Monday.

“We pick cases around themes that are strengths of the Quinlan School of Business,” See said. “This year, the case focused on sustainability, which is a university strength, and also around supply chain, which is an area where Quinlan excels.”

“We had a fearless leader, who kind of pushed us to be the best we could,” said Taylor. “He was kind of the glue to the group. So when we wanted to give up, we didn’t. And the fact that we’ve worked together before really helped. I feel like most groups under this pressure would want to quit.”

Also returning to competition this year—but on the opposite side of the table—were judges Austin Nugent (BBA ’13) and Davi Aragao (BBA ’14). The duo was part of the winning team in the inaugural Quinlan Case Competition in 2012. Nugent is now a credit portfolio manager with Northern Trust, and Aragao is a FX trader with HC Technologies.

During the competition, the judges focused on the thinking and analysis behind the solutions presented by the students.

“When you’re judging, you see the people being nervous and just think, ‘It’s no big deal. We’re not actually here to judge you. We’re just here to hear your ideas,’” Aragao said. “Had I known that in 2012, I wouldn’t have been so nervous. It probably would have been a lot easier.”

Nugent noted that the discussion segment of the competition is a particularly valuable experience for students.

“The Q&A portion is probably the most hated part by the participants, but that’s what the real world is,” Nugent said. “You’re going to come up with an idea, and people aren’t just going to look at you blankly and accept it. They’re going to challenge your theory, and they want you to be able to defend it. And that robust discussion is how new ideas are formed and how companies move forward.”

View event photos in the gallery below or on Quinlan's Flickr page. 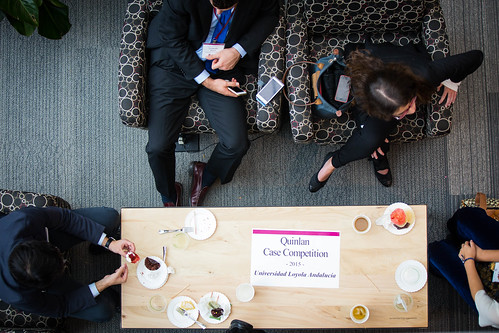