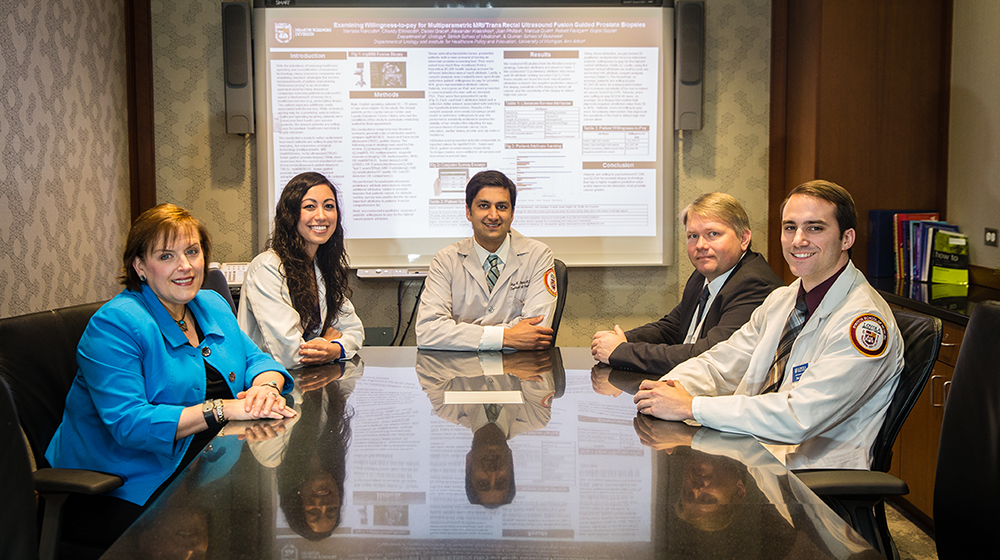 A recent study by Quinlan School of Business and the Stritch School of Medicine sought to better understand the impact of price when patients need to choose between different medical procedures related to cancer detection.

In the end, results showed patients desire and are more willing to pay for testing that will give them a higher rate of cancer detection. Further, they value tests that assure them that they do not have cancer.

“Multidisciplinary research like this to determine a patient’s willingness to pay for medical intervention has never been done before in prostate cancer,” said Gopal Gupta, M.D., an assistant professor of urology at Stritch. “It was very interesting, and it gave us an insight into what patients really value when it comes to prostate cancer detection and willingness to pay for new technologies.”

Recently, the Department of Urology at Stritch began performing a new biopsy procedure to detect prostate cancer. When a doctor suspects a patient has prostate cancer, the current practice is to perform 12 random needle biopsies of the prostate with ultrasound (US) guidance. As part of Stritch’s new procedure, doctors perform a multi-parametric magnetic resonance imaging (MRI) of the prostate first.

This imaging is interpreted by expert radiologist and gives highly detailed information on the likelihood of cancer and where the cancer is. Gupta and his team then fuse this information to ultrasound to essentially perform a guided biopsy to accurately pinpoint areas at increased suspicion for prostate cancer shown on the MRI. This technology is called a MRI/US fusion biopsy.

“This gives us a lot of information, and we’re able to put needles in the areas of interest—not just randomly,” said Gupta. “In addition, if this new biopsy technique comes back negative for cancer, the negative predictive value is extremely high.”

Based on changes in healthcare spending by patients, Gupta and his colleagues wanted to better understand how his patients perceived this new technology and what they were willing to pay for it, so they reached out to Quinlan’s marketing faculty. They partnered with Quinlan marketing faculty Joan Phillips, professor, and Alexander Krasnikov, assistant professor, to perform a conjoint analysis.

“Conjoint analysis is used widely in marketing to understand the trade-offs customers make when choosing between products or services. It allows us to quantitatively represent how consumers weigh different combinations of attributes,” said Phillips.

Krasnikov adds that a conjoint analysis takes a more holistic and customer or patient-oriented approach than the traditional cost/benefit analysis done in medical studies. The analysis asks patients, “What’s really important to you?”

According to Gupta, the study overall showed that patients can be advocates for their health care in a consumer-driven market. Their willingness to pay more money for a better product could factor in when crafting new health care policy.

“They were willing to pay $2,000 for the MRI based on the fact that it would improve the chance of a true negative biopsy,” he said.

However, patients were not willing to pay more for a biopsy intervention that improved the chance the test would detect high-risk cancer alone, versus any low-risk cancer.

“We were real excited about this being a true interdisciplinary approach,” he said. “We know medicine, and we know we have great colleagues who understand marketing and consumer-driven health care. It was eye opening to collaborate with the Quinlan faculty on such an interesting project.”

The results have been accepted for presentation at a conference, and the team is preparing a paper for publication.