For the third year, the Chicagoland Chamber of Commerce and Quinlan School of Business partnered to learn more about Chicago’s small businesses.

The two groups collaborated on the Chicagoland Small Business Outlook Survey, which collects information on small businesses, what they need to succeed, and their outlook for the future.

This year’s survey revealed that 77 percent of small business owners in the Chicagoland area plan to grow their businesses, despite a national decreased confidence in the economy.

“While business owners are worried about the financial states of Chicago and Illinois, they are optimistic about the chance to expand and in their ability to run successful businesses,” says assistant marketing professor Alexander Krasnikov, PhD, who oversaw the survey implementation by a Quinlan graduate marketing class.

Krasnikov continues, “The results of this survey are important because they give us a better understanding as to what is top of mind in the business community, as well as a chance to find new ways to support it.”

The 2017 survey results were announced on January 26 at the Schreiber Center at an event attended by more than 100 entrepreneurs. Melissa Ballate, Quinlan alumna and president of branding and strategy firm Blue Daring, presented the study findings.

Quinlan graduate marketing students were engaged during all stages of the project, from survey development to data collection and interpretation.

“The Chicagoland Chamber and the Quinlan School of Business at Loyola University share a passion for investing in Chicago's business community," says Theresa E. Mintle, president and CEO of the Chicagoland Chamber of Commerce. "Our three-year partnership in producing the State of Small Business Survey gives voice to small businesses and drives the support the Chamber and Loyola provide to entrepreneur and neighborhood businesses."

Loyola’s Office of Corporate Engagement facilitated the partnership between the Chamber and the Quinlan School of Business.

View event photos in the gallery below or on Quinlan’s Flickr page. 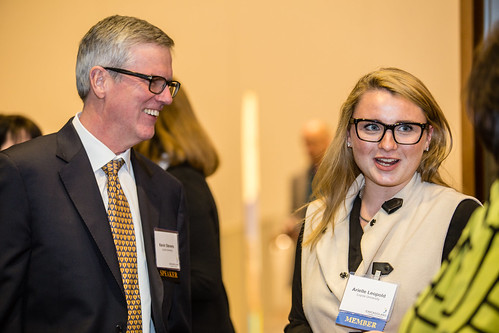