Visual social media is changing how we communicate, says Drenten

Drenten was one of three featured speakers at the Q Talks event, which also featured Professor Tim Classen unpacking the opioid crisis and Professor Al Gini on the importance of humor. Q Talks is part of the Dean’s Alumni Series.

1. Visual social media is a form of language.

As an example, she recounted how her father used a laughing emoji with tears instead of the crying emoji he meant to use after the Loyola men’s basketball team’s Final Four loss. People also have to navigate emojis that have taken on sexualized meanings, such as the peach emoji.

Drenten added that this language of visual social media “helps us express our emotions beyond words,” adding humor and other complex emotions to our communication.

“We are living in an era of pics or it didn’t happen,” said Drenten. “We provide this evidence in ways that express who we are and communicate something about our experiences,” from proving that you voted to showing the real experiences of people fighting cancer.

Unfortunately, “we can’t always trust what we see online,” said Drenten. “The ‘evidence’ is easily manipulated,” including through photo manipulation or simple camera angles.

3. Visual social media is a form of self-expression.

“Visual social media says something about who we are and what we find important,” said Drenten. On her own Instagram account, Drenten posts about friends, family, students, and her travel adventures.

Visual social media “allows us to say something about our identities and who we are,” she added. “This can be as easy as changing the skin tone on an emoji to match your own or even challenging gender norms in our culture such as the case of male beauty bloggers.”

Visual social media such as Pinterest can even help navigate new experiences and changing identities. In one of Drenten’s research studies, one participant turned to Pinterest to help her transition her identity from girlfriend to fiancée and then to wife.

Drenten closed her presentation with this thought: “The great thing about [visual social media] is that it’s constantly changing, and we as society get to be the ones who determine what’s next.”

To learn more about what Drenten discussed, read her research:

View Q Talks photos in the gallery below or on Quinlan’s Flickr page. 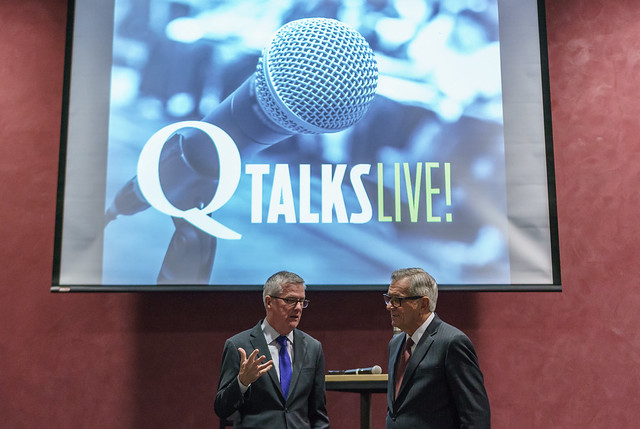