Hope is the thing with feathers 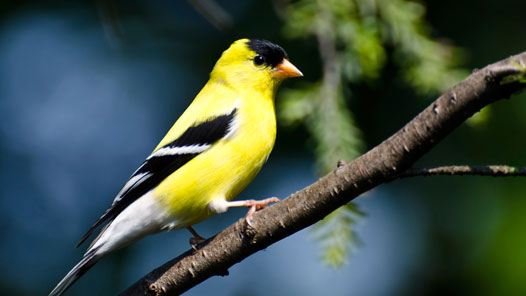 The American Goldfinch is one of 69 bird species documented at Loyola’s Retreat and Ecology Campus.

Despite several degrees and years of experience that indicate otherwise, Stephen Mitten, S.J., doesn’t think of himself strictly as a scientist. “I see myself more as a naturalist,” he says. “I’m an ambassador for the environment.”

As spiritual director and resident ecology faculty at Loyola’s Retreat and Ecology Campus, Fr. Mitten teaches several biology and conservation courses. But his real love is avian ecology. Last summer, he and student Edgar Perez took a census of the birds and their breeding grounds on the rural campus in Woodstock, Illinois. Perez was an intern at the campus last summer, and will be again this summer, but he and Fr. Mitten have known each other since Fr. Mitten’s previous tenure at St. John’s Junior College in Belize, where Perez was a student. Now both are here, and both are highly invested in the research and restoration taking place at the Retreat and Ecology Campus.

Although the plant life at the campus had been surveyed and documented, the fauna had been much less so. The parts of an ecosystem are all connected, however, and birds can serve as good indicators of the health of the biological community. The data collected by Perez and Fr. Mitten will provide a baseline for the ongoing restoration of the campus’s woodlands and wetlands.

“When we do restoration you may lose some species and may gain others,” says Fr. Mitten. “How do we maintain biodiversity while meeting the goals we have for restoration?”

According to the final report, 69 bird species were documented, 40 species were found breeding or holding territories on the campus, and an additional 29 species were detected as flyovers or occasional visitors. The most common species were Red-winged Blackbirds, Gray Catbirds, American Robins, Northern Cardinals, Black capped Chickadees, American Goldfinches, and Brown-headed Cowbirds.

Both Fr. Mitten and Perez have been interested in ornithology and ecology since childhood.

“When I was a kid, I used to ask my dad a lot of questions—what is this, what is that,” says Perez. “If he didn’t know, I went to find out. I was always curious about the environment. I purchased a bird book myself. I started to look over it and read it and learn the different parts that make a species.” Perez eventually became involved with the Audobon Society, and participated in bird counts on the society’s behalf in Belize. At St. John’s, he was further encouraged by Fr. Mitten’s own interest in birds.

Fr. Mitten is a local—he’s from Zion, Illinois, and earned his undergraduate degree in biology from Northern Illinois University in DeKalb. “I wanted to major in biology ever since I stole my Dad’s Kodak instamatic camera in fourth grade and set out to take pictures of all the birds in the back yard,” he says. “They were all just black specks, because I couldn’t really get close enough to get a good photo.”

The restoration process at the Retreat and Ecology Campus will take a long time. “The watershed basin has been really altered by past anthropomorphic ditch-digging,” Fr. Mitten says. The area was originally drained to create land for cattle grazing. Long-term goals are to remove invasive species like buckthorn and honeysuckle, restore the oak-hickory woodland, and reestablish the fen, a kind of wetland created by the retreat of glaciers.

Fr. Mitten will continue to work toward the restoration and contribute to the new Institute of Environmental Sustainability. He is developing a course in avian ecology, and he teaches a study abroad course in Belize in January. He hopes to instill in his students the idea that local actions can have global consequences. “What I do in Chicago has an impact on whether these tropical ecosystems will be around in the future,” Fr. Mitten says. And although he misses the biodiversity of the tropics, he values the particular ecosystems here as well. “Northern Illinois has things the tropics don’t. If we don’t have a glacier fen, we’re deprived,” he says. And, like St. Francis (which is Fr. Mitten’s middle name), he sees the divine in even the Gray Catbird. “They’re all God’s creatures—I can’t say one is better than the other,” he says. “They all reveal the imagination of our Creator.”

Perez will spend another year at Loyola, and then he plans to return to Belize and St. John’s to develop the environmental science program there. He is also particularly interested in the effects of toxic chemicals, such as pesticides, on biological systems. “Belize doesn’t have any ecotoxicologists,” he says. “I hope to become the first one.” He believes his scientific knowledge carries with it a responsibility to act. “Now that I have the knowledge I was after as a child, I realize there’s more to it than that,” he says. “I see environmental degradation, pollution, global warming. Hopefully I can do something with this knowledge that will help.”