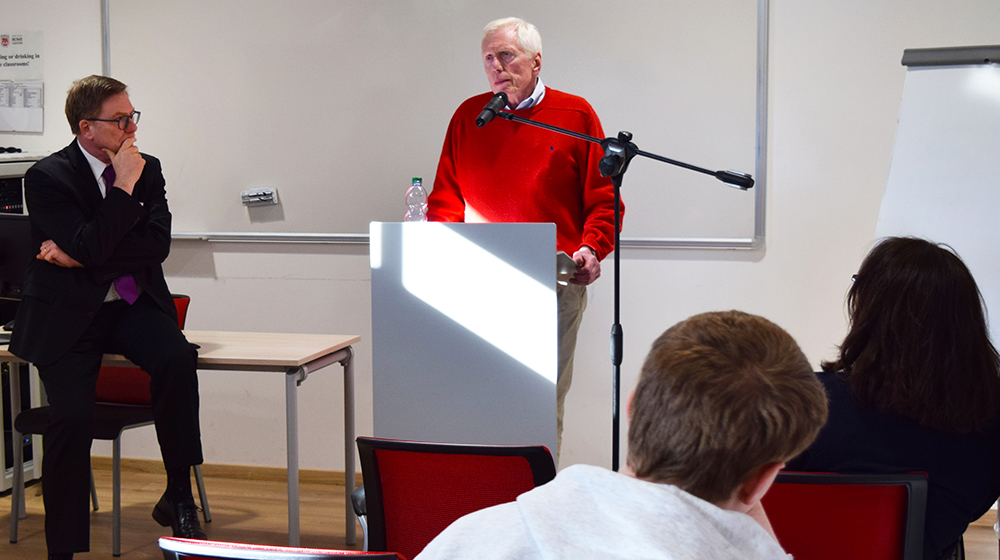 Callahan received his B.A. in modern European history from Loyola University Chicago and his M.A. in American history from DePaul University. He joined the Foreign Service in 1979 and served in Costa Rica, Honduras, London, Bolivia, Athens, Rome, Baghdad, and Nicaragua, where he was U.S. ambassador. During his years of service, he wrestled with many significant issues dealing with national constitutions, legislatures, administrations, social forces, interest groups, political parties, and elections.

Callahan spoke to the class and other guests from the JFRC community about his experiences working and living in Latin America, while providing some background on the recent political histories of various countries. He also discussed his thoughts on new democracies and populism, relating these themes from Latin American politics back to the United States.

After his talk, he asked students to share their thoughts on American politics, which sparked an interesting conversation about the current political climate and hyperpartisanship. Some students expressed their concern that U.S. politics has become so divisive that it can be difficult for two people on opposing ends of the political spectrum to have a respectful, productive conversation. Callahan agreed, and explained that diplomats serve both Republicans and Democrats, so whatever their personal politics and the current administration, they must learn to not only put aside their own opinions, but even find a reason to defend the president’s policies.

Another student asked how to make the transition from studying political science as a university student to working in the Foreign Service, and Callahan gave some information on how he got into the field, but said that ultimately, “You learn by doing.”