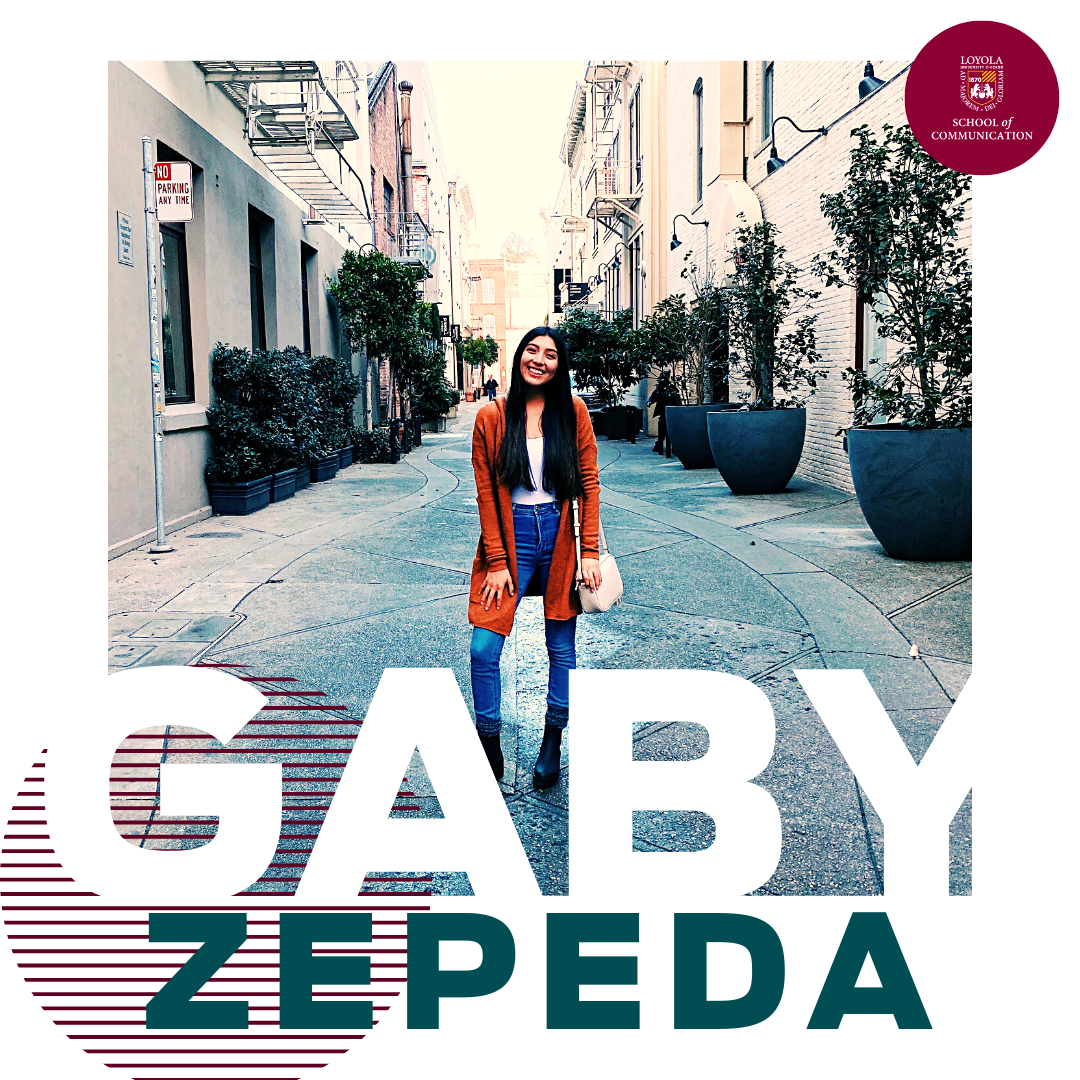 Gabrielle Zepeda, 2019 Loyola University Chicago alumna, is one of the many success stories of the School of Communication. She is a Public Relations and Events Associate at SevenRooms in San Francisco. SevenRooms is a guest experience and retention platform that helps hospitality operators create exceptional experiences that drive revenue and repeat business. Originally from San Diego, Zepeda said she wanted to return home following graduation to be closer to her family. Zepeda, 25, was hired by SevenRooms just two months after she graduated with a Bachelor’s Degree in Advertising and Public Relations. Though Zepeda said Loyola helped prepare her for her career, she fondly remembers other things about her time here.

What initially drew you to Loyola?

It’s kind of funny, my dad always used to say, “You’re leaving paradise, don’t go!” I’m really close with my family. I grew up in San Diego, it’s a lot of beaches, palm trees and it’s kind of slow, to be honest. When I was choosing where I wanted to go for school, we took a family trip to New York. I was just like ‘Oh my gosh, look at the hustle and bustle of the city, you can literally do it all.’ That trip, I got it in my head that I wanted to leave California, where I wasn’t really sure but I think the city aspect was really important to me, only because it was so different.

I didn’t know when I would have the opportunity to live somewhere for four years or longer, and just get out of where I had grown up and see something different. I really liked Loyola being a bit smaller. Compared to a Big-10 school or a major university, I liked that the class sizes were smaller, you could have a better relationship with your professor. [It’s] a little bit easier, less overwhelming, because you’re not in a stadium sized hall of like 2,000 kids, it’s like 30 kids at most. Once I switched to PR, I had the opportunity to get even further professionally and try my hand at different things.

Why did you choose the Advertising and Public relations major?

I was going to be an early childhood education major. In high school, I had an internship where I worked with a first-grade teacher and she was such a gem of a human being, I loved working with the kids, helping them with reading, and math, we put on a little school musical. I think at the time, [it was] the only thing I had ever known. And I really looked up to that first-grade teacher as well, she was such a big mentor to me throughout high school. So, I was like, “Oh, this makes sense. I've had a little bit of experience, this is what I want to do.” But I think I always had in the back of my head that I loved writing, and I loved just doing multiple things all at once, which I think PR combines a lot of different, mental tactical skills that you need to have. And so I was like, “You know what, I think I'm just going to try it out.” That's the beauty of being in college, you can try anything out and switch your major within a certain period of time. I did that relatively quickly, and it definitely worked out for the best.

How did your time at Loyola prepare you for your job and life?

I was on the PR track. When I switched my major to PR, I had no idea what it was, I was toying between journalism or PR, but I decided the PR track was a little bit better fit for me because it included writing and social media marketing. It was a little more aligned with marketing, which I really liked as well. I think the PR 101 [COMM 210 Principals of Public Relations] class was a good foundational class. It taught me how to pitch to a reporter, what reporters are looking for, and how to write a press release. Then, I think it was my sophomore year, I got my first internship at Modern Luxury. I was on their editorial team, so the work was still very journalism focused. It was a good foray into what it’s like to be a working intern navigating the city. From that, I went to a social media internship [at Oak Street Social and Jo Chicago Communications] then PR [at Agency H5]. One of my most memorable internships was at Agency H5, which was hospitality PR at its finest. Being downtown in the School of Communication was really easy for me to go to a class and then go to an internship. That was key for the number of internships I had. Sometimes when you are in a traditional college town, working in a high-rise building is not necessarily an option. You definitely get a huge perk by being downtown.

What are some of your best memories from your time at Loyola?

It’s so wild to be three years out of college. Where did the time go? But, I mean, the SOC, obviously. They’re like my home away from home, I love them dearly. They’re the best people in the entire world. Anyone who is lucky enough to meet them should be so grateful. The SOC was really important to me not just to learn things about PR, but it offered another community of home and people that I could talk to. I was also in Chi Omega, so that was really important [to me]. I feel like those memories with my friends were really important, for someone who lived 2000 miles away from home, you need some people in your corner.

My junior year is when we went to the Final Four for basketball, so that was just a wild time at Loyola in general. To truly be a student at that was the best because we aren’t a sports school, no one expected to see Sister Jean on ESPN. It was wild sitting in Damen watching it on a big screen. That was one of the best core memories I have of being a traditional college sports student — that was pretty iconic.

What advice would you give to students searching for jobs or looking to get involved?

First and foremost, no matter if you’re a freshman, if you’re a sophomore, junior, senior, finding a job, finding what you’re passionate about, finding what you just want to try and do after college, you need to give yourself some grace. In that whole process, it’s not like a one and done. You could be at the biggest company, and it could still not be the job for you. You can work at a small company and then be like ‘this is the best thing ever.’ Give yourself grace when you’re in the job process or thinking about what you want for your future because it’s not linear by any means.