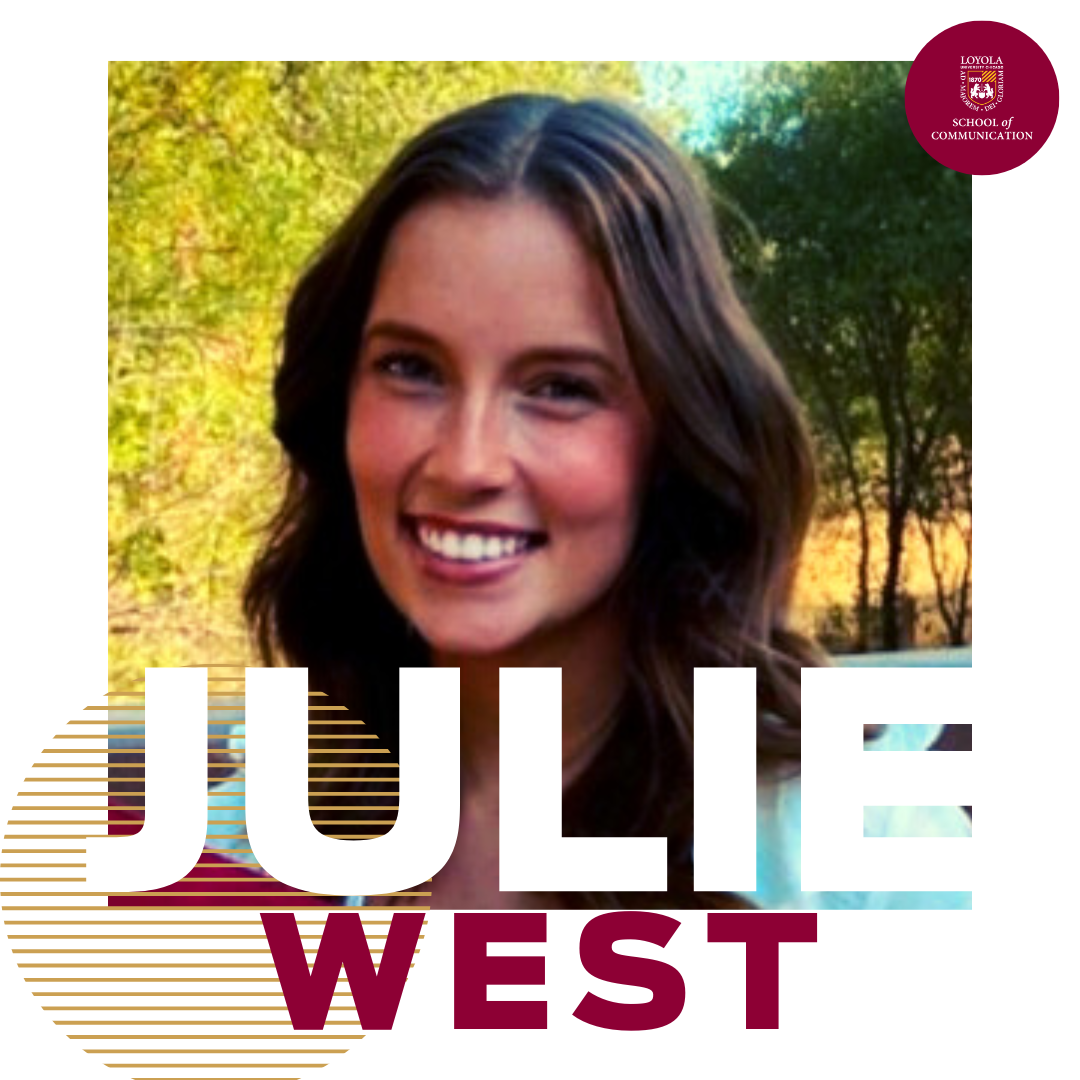 Welcome to SOC Ramblers in the Major Leagues, where we highlight various media, marketing, and communications careers in action. This month, we sat down for an interview with Julie West, an SOC Communication major who also serves as a producer of one of the school’s hit shows, Rambler Sports Locker (RSL). As a California native, the need to break out of her comfort zone and explore new frontiers drew her to accelerate her academic career in marketing and communication at Loyola University Chicago. “I knew that its proximity to large corporations would provide me with the most opportunities for internships and jobs post-graduation, while allowing me to learn from industry experts.”

Although West is a true Raiders fan, sports media is not her only love. As she prepares for graduation, she aspires to continue her education by going to law school to pursue a career in media law. According to West, journalism was always part of her future. “I was drawn to journalism,” she said, “because I knew it would allow me to give people a voice who otherwise would not have their stories heard. I have learned that everybody has a story worth telling, and we can all learn a lot by listening to them. Through journalism, I have an opportunity to share stories and bring people together; something that is very powerful in a time when our society is so divided.”

Read on to explore West’s account of what it is like wearing a producer’s hat for a high-energy sports show at Loyola University Chicago.

This year, I am fulfilling the role of technical producer for RSL! Rambler Sports Locker is a weekly student run sports broadcast show that covers Loyola and Chicago-based teams. We do everything from sports commentary, highlight packages, features, student trivia, and more. I work with Gabbi Luma, RSL’s executive producer to organize the structure of the show, create sports content, and direct our amazing groups of students on production day. As a technical producer, I am responsible for helping students learn the studio equipment, building and designing the graphics we use in the show, working through the logistics of the show’s structure, filming and editing highlight packages from games, and editing the show each week.

What got you interested in participating in RSL? How did you become one of the producers of the show and for how long have you been in this role? Have you served in any other roles at RSL?

I have always had a passion for broadcast journalism and Rambler Sports Locker is a place where I can work with other students who share the same passions and interests. This shared passion along with the SOC’s amazing resources and faculty support creates an exciting environment where we have the creative freedom to make the show the best it can be. RSL is the perfect opportunity to gain hands-on experience working in a broadcast studio.

I became a technical producer by applying for the role at the start of this semester. Last year, I was a reporter and covered a few basketball games. While I will continue to do that this year, I wanted to take on a role that was more technical to strengthen my skills working with the equipment in our studio.

In your opinion, what makes sports media unique?

Sports brings individuals and communities together and unites them under one shared interest. Getting to capture that excitement and passion and share it with others is my favorite part of working in sports media.

I'm sure being a producer is a fascinating job to have. What do you love most about the role you play? What challenges have you faced and how did you overcome them?

In RSL, we are given complete creative freedom to make the show our own. I love working with other students and bringing our ideas to life. From brainstorming, to building graphics, and then filming it on production day, it is such a rewarding experience to turn our ideas into a reality in the show.

How has this role helped you to grow as a producer? As a student? As a person?

When I first joined RSL, I knew nothing about sports. I had a hard time writing scripts and understanding what was happening during the games. Over time, I watched more sports games, asked questions, and did research to learn the terminology needed to succeed in my role. Now, I feel confident in my ability to understand different sports and can use that knowledge to write my stories and help other students with theirs. While I still have a lot to learn, this experience taught me that in life I should not be afraid to do something just because it is outside of my comfort zone.

Do you have any favorite moments or favorite episodes?

Of the four episodes we’ve released this semester, my favorite was last week’s. Recently, we’ve been encouraging students to produce creative ideas for different segments. Lucas Kihm, a junior in RSL, proposed that we bring back a segment that used to be in every show three years ago called The Ramble. The segment is an opportunity for students to debate different sports topics. We received overwhelming excitement for the segment and had five people volunteer to be featured in it. It was so exciting to see everyone’s personality come through in the segment and hear their passions for the sport as they debated each other. I am very excited to continue implementing more creative segments to continue to diversify the show.

Alright, Julie, let's talk about community, identity, and teamwork: There is something immensely compelling about community, and I think this is intensified in the sports arena. From the players to the coaches and the fans, community and teamwork are two of the most legendary earmarks of the sports arena. When you think about the team you work with at RSL, how would you describe them? What stands out to you the most about them?

I would describe my team as highly ambitious and creative. The culture within our team is extremely fun and supportive. We have a mix of students who have been a part of RSL for four years and some students who just joined, but everyone works to ensure that new students are supported and feel encouraged to get involved and try new things. Our team is very talented, and each student brings a unique set of skills that they can contribute to the success of our program.

We often learn a lot about ourselves and the world around us by engaging with others. What have you learned about yourself, the power of community, or the impact that having a team vs. Working solo makes from working with your colleagues at RSL? Are there any special moments that stand out to you?

Working with my team at RSL, I learned that we could accomplish much more at a higher quality when we all collaborate. In RSL, I know that I am never on my own to get the work done. If I need to go film something or need feedback on a graphic or idea, there is always a long list of people who are willing to help me at the drop of a hat.

What projects are you most looking forward to tackling with the RSL team this semester/ year?

This year, Loyola Athletics joined the Atlantic Ten Conference and are playing a set of new and highly competitive schools. I am excited to cover the 2023 Atlantic 10 Men's Basketball Championship which will be played March 8-12 in Brooklyn, N.Y.