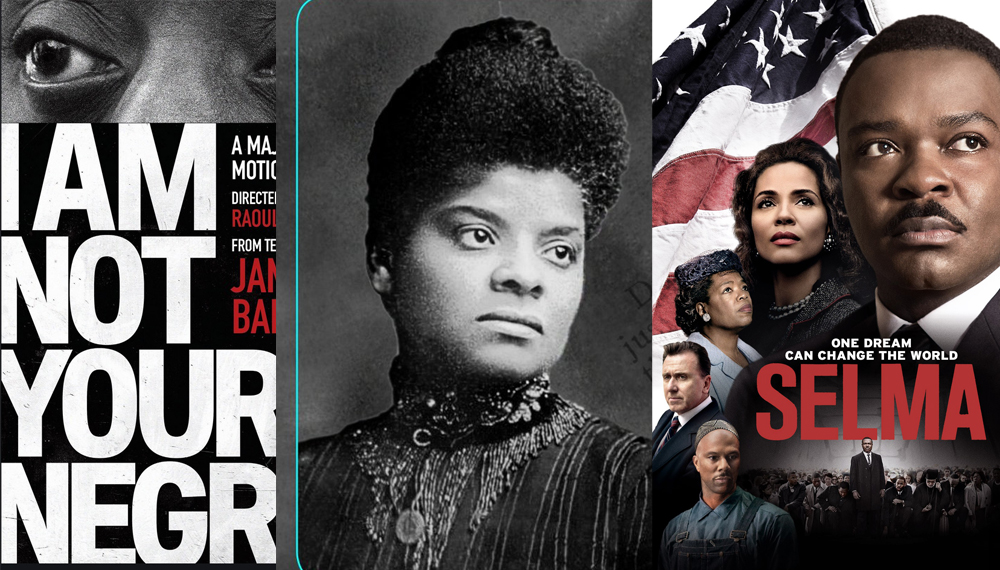 As part of its Black History Month initiative, the School of Communication is pleased to announce its first film series. The titles selected for the series include “I Am Not Your Negro,” “Ida B. Wells: A Passion for Justice,” and “Selma.” Each of these films offers look into great civil rights leader who worked tirelessly to make America a more equitable and just nation.

The SOC is featuring each film during three weeks in February and members of the faculty and staff will host a discussion session every Friday at 4 p.m. via Zoom. Those interested in participating in the discussions are asked to screen the film(s) on their own time and join the group on Friday afternoon. More about the films and how to register for the post discussions are below.

I AM NOT YOUR NEGRO – Screen Now through Feb. 19

“An Oscar-nominated documentary narrated by Samuel L. Jackson, I AM NOT YOUR NEGRO explores the continued peril America faces from institutionalized racism.

In 1979, James Baldwin wrote a letter to his literary agent describing his next project, Remember This House. The book was to be a revolutionary, personal account of the lives and successive assassinations of three of his close friends--Medgar Evers, Malcolm X and Martin Luther King, Jr. At the time of Baldwin's death in 1987, he left behind only thirty completed pages of his manuscript.

Now, in his incendiary new documentary, master filmmaker Raoul Peck envisions the book James Baldwin never finished. The result is a radical, up-to-the-minute examination of race in America, using Baldwin's original words and flood of rich archival material. I AM NOT YOUR NEGRO is a journey into black history that connects the past of the Civil Rights movement to the present of #BlackLivesMatter. It is a film that questions black representation in Hollywood and beyond. And, ultimately, by confronting the deeper connections between the lives and assassination of these three leaders, Baldwin and Peck have produced a work that challenges the very definition of what America stands for.”

You would be hard-pressed to find a movie that speaks to the present moment with greater clarity and force, insisting on uncomfortable truths and drawing stark lessons from the shadows of history.” – A.O. Scott, The New York Times

View on Kanopy via your LUC credentials.

One of the most vexing facts of cinematic life the past 50 years is that the Rev. Martin Luther King Jr. and the civil rights movement he led have not been given their rightful place in the feature-film canon. Often relegated to the shadows of ancillary plots, atmospheric background and blurry historical context, what were arguably the most pivotal events in American life during the 20th century never found their rightful place — front, center and spotlit — in the dominant narrative art form of that era.

And it was worth the wait.

With Selma, director Ava DuVernay has created a stirring, often thrilling, uncannily timely drama that works on several levels at once. Yes, it’s an impressive historic pageant, and one that will no doubt break the ice for similar-themed movies to come. But DuVernay, whose roots are in the indie world, having directed the films I Will Follow and Middle of Nowhere, has also rescued King from his role as a worshiped — and sentimentalized — secular saint. Here, she presents him as a dynamic figure of human-scale contradictions, flaws and supremely shrewd political skills. – Ana Hornaday, The Washington Post.

View on Swank via your LUC credentials.

IDA B. WELLS: A PASSION FOR JUSTICE – Screen from now through March 5

Documents the dramatic life and turbulent times of the pioneering African American journalist, activist, suffragist and anti-lynching crusader of the post-Reconstruction period. Though virtually forgotten today, Ida B. Wells-Barnett was a household name in Black America during much of her lifetime (1863-1931) and was considered the equal of her well-known African American contemporaries such as Booker T. Washington and W.E.B. Du Bois.

Ida B. Wells: A Passion for Justice documents the dramatic life and turbulent times of the pioneering African American journalist, activist, suffragist and anti-lynching crusader of the post-Reconstruction period. Nobel Prize-winning author Toni Morrison reads selections from Wells' memoirs and other writings in this winner of more than 20 film festival awards.

“Tells of the brave life and works of the 19th century journalist, known among Black reporters as 'the princess of the press,' who led the nation's first anti-lynching campaign.” – New York Times

“A powerful account of the life of one of the earliest heroes in the Civil Rights Movement...The historical record of her achievements remains relatively modest. This documentary goes a long way towards rectifying that egregious oversight.” – Chicago Sun-Times

View on Kanopy via your LUC credentials.