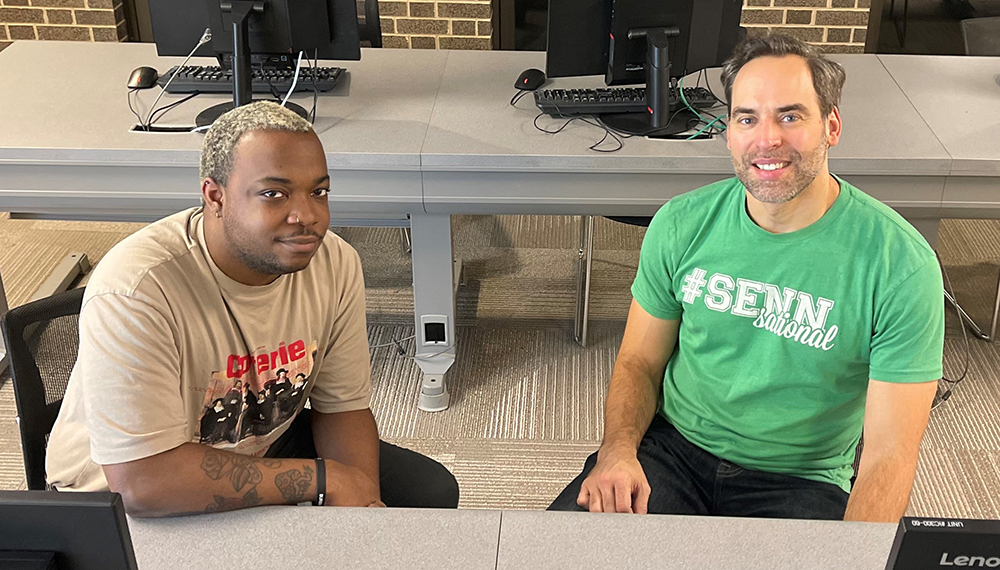 Kendall Jackson was a shy, quiet sophomore at Senn High School when he first entered Michael Cullinane’s journalism class. Over the next three years, Jackson learned how to become a talented video journalist under Cullinane’s direction. Together, they helped create SennTV, a weekly video newscast at the high school in Chicago’s Edgewater neighborhood.

Jackson graduated from Senn in 2018, earned a scholarship to Loyola University Chicago, and is now a senior Film and Digital Media major in the School of Communication. Jackson also co-founded Ardor Archive LLC, directing almost a dozen music videos, shooting thousands of photographs and developing social media campaigns for brands such as Jordan, Adidas and Nike,

Over the same period, Cullinane grew Senn’s journalism program in partnership with Loyola’s SOC. He earned a graduate degree in Loyola’s Digital Media and Storytelling program, and in addition to his daytime teaching duties at Senn, became an adjunct professor in the SOC.

This fall, student and teacher were reunited when Jackson enrolled in Cullinane’s COMM 205 Reporting Basics I course at Loyola. The reunion rekindled the student-mentor relationship between the pair, and gave them a chance to catch up on each other’s lives.

After a recent class, the two reflected on their reunion. Their comments have been edited for space and clarity.

Do you recall your time together in the first class at Senn?

Cullinane:  Kendall joined my class in the 2015-2016 school year. The beginning of the year with new students is always tough. You're looking for some enthusiasm to get the electricity flowing, and often the students make it clear that they wish they could still be on summer break. Kendall came in with electricity flowing through him--a desire to not only ace the journalism program but to make it his own. His energy was contagious and flowed through the rest of the class.

How did the teacher-student relationship develop?

Cullinane: I recall Kendall being quite forthright about his past and present, the good stuff he had going and the hardships he'd overcome. I was his personal project supervisor and was able to work one on one with him as he developed a youth oriented "walking tour of Rogers Park." From then on, rather than simply completing assignments for a grade, I got the feeling that Kendall wanted to do something more--he wanted to dazzle an audience and truly give something back with his words, photos, videos, and ideas.

Jackson: I was ridiculously shy I remember walking into the class the first time, and I never walked to a desk faster than my life because I was late! But I remember once I felt comfortable that first class because the way he kind of directed the class. He was passionate and it didn’t feel forced, it didn’t feel like he has to do but more he actually loves doing this. That made me a million times comfortable.

If I’m being real, he set the pace for me. I took that class so seriously my whole tenure at Senn because of him that first day. Some would say I cared too much at certain points but I was dedicated you know? His energy to it was something I needed to push me. He let me have so much guided power with in the program and let me grow too. I created the SennTV logo. I edited all of our episodes. I was in charge of all of our social media pages. I created goals. He really let me run it because I wanted to and not because I had to.

What did you learn from each other?

Jackson:  I say the one thing that still follows me that Mr. Cullinane taught me is that you always have to be a student while also being a teacher. He’s always actively learning and passing that knowledge to his students and peers. I remember when he was attending Loyola for his masters while I was a student at Senn, every week as he was learning he was teaching right back to us. I was super appreciative of those moments. Everybody use to feel it was a lot but man it was preparing for the next step in life which was college.

I don’t create my own business with my business partner and roommate Michael Tinley (Loyola Senior) Ardor Archive without SennTV and learning from Mr. Cullinane.

Cullinane: I've tried to express my gratitude to Kendall often, but I don't know that it ever really sunk in. He changed my life. Like any veteran teacher (although I like to think I'm still young), I have my doubts about continuing my career through what often feels daunting. Kendall reminded me on many occasions that my small actions could change lives. I saw it in how we were able to light sparks under each other. Our conversations often became grand ideas which we still use on Senn TV all these years later. I also saw how he brought out the best in his peers and even how he made his teachers feel valued and special. Though I struggle with it still, his kindness, openness, and generosity has had a lasting impact.

What is it like now being in a college class together?

Cullinane: When I first saw Kendall's name on my roster, I cracked up, took a picture of it, and texted it to him, joking that "no way was I teaching him again." Of course I was absolutely thrilled. I was mostly excited to catch up and see how far he'd come. The first night of class, we chatted for about an hour. I got lots of the details of his accomplishments and left the class feeling proud. That ball of energy I met during his sophomore year and all those little sparks we'd put under each other had made it. His own business, a photo on Times Square. I couldn't be prouder!

Jackson: It’s insane to hear him lecture, he’s really polished and really good in keeping people engaged. It’s a perspective thing, in high school, I think it don’t click how great it is to have an instructor who cares and being charismatic really matters at-least to me when it comes to retention of material.

Only cons so far is that he called me out the first night of class as one of his favorite students ever. I knew he was going to do but it doesn’t change the fact he still did it! I felt weird but I know it’s all love. The other con being he taught me so well about critiquing articles in high school and structure that I feel bad about critiquing others work in class! I feel like such a jerk, so if critiqued your article this semester I’m sorry if I was insanely critical or anything.

I’ve had a rough semester and really rough year. We talked about bits and pieces about it but I think having him around does more healing than any conversation we’ve ever had. He’s seen a lot of growth and it’s great to be in his class this semester.