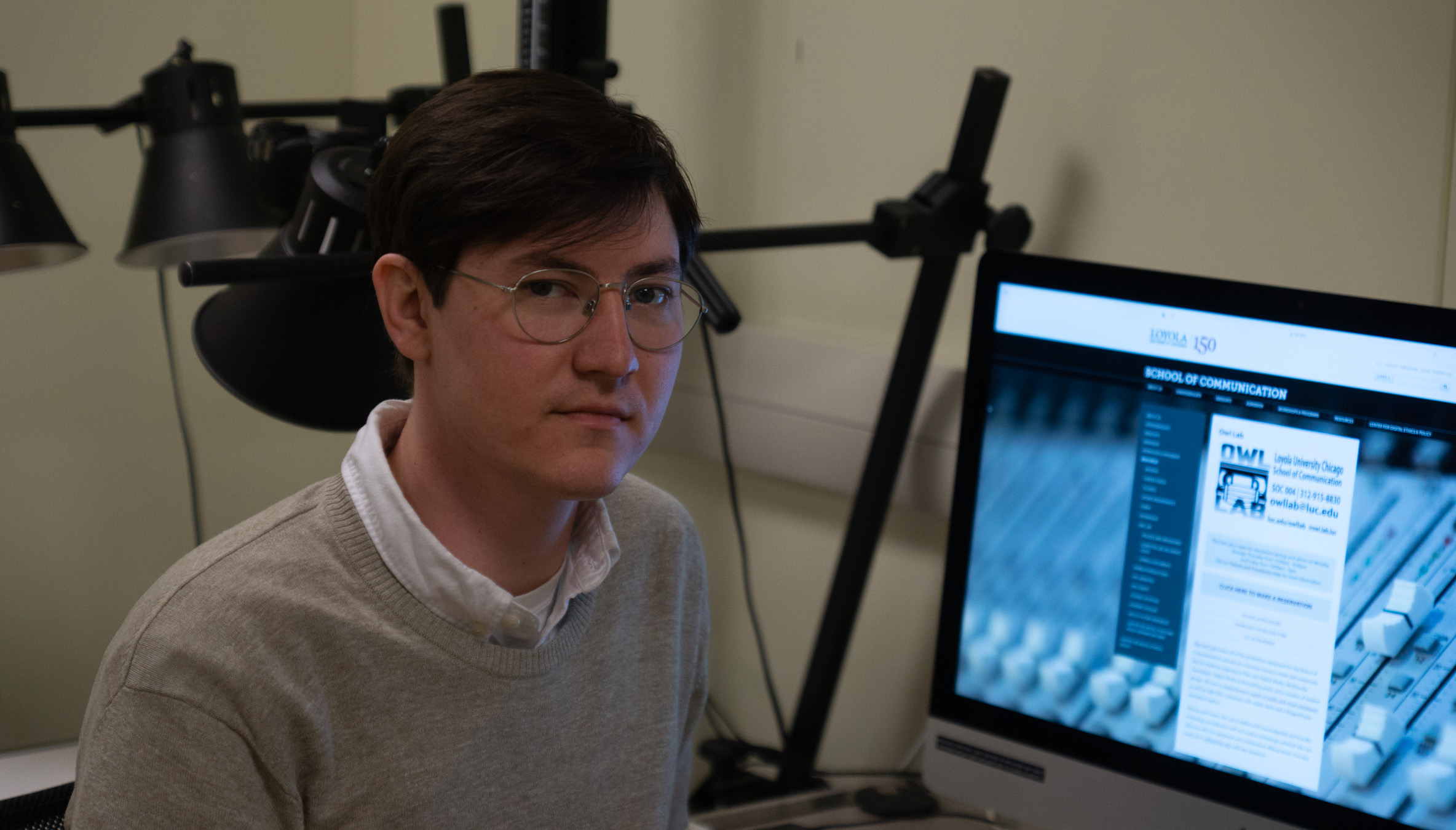 In the “Welcome to the Team” series, we interview newly hired staff members at the School of Communication. This edition features Technology Coordinator Paul Quinn.

Paul is no stranger to the university. Paul graduated in 2020 from the School of Communication’s Digital Media Storytelling Master’s program. In addition, Paul is a 2018 graduate from Loyola’s Quinlan School of Business in which he studied Marketing and Sport Management.

During both undergrad and graduate studies, Paul was heavily involved with WLUW-FM 88.7, the university’s independent radio station. During his time there, he was the Programming Director and then became the Operations Manager and gained experience with photography at major music festivals such as Riot Fest and Pitchfork Music Festival, and audio/video production of in-studio sessions.

Let’s start at the beginning of your experience at Loyola. Can you tell me about your time here as an undergraduate student? Why did you choose Loyola?

The most appealing thing for me was being in Chicago. I was also looking at DePaul, but I really liked Loyola’s Lake Shore Campus, because I liked being on a college campus. I also liked the experience of being downtown for Quinlan and the School of Communication. It was the best of both worlds. I had the typical campus experience but also the city of Chicago.

I always wanted to be in the business school for marketing, because the statistics and analytics classes I was taking in high school made me want to pursue it in college. I did my undergraduate education in the Quinlan School of Business. I was able to qualify for the double major in Sports Management with most of the classes I was already taking, and I was interested in it, so I decided to add that major. I got my B.A. in Marketing and Sports Management form the Quinlan School of Business in 2018.

Can you tell me more about what drew you to Sports Management?

When I was at Quinlan, I was also working for the Cubs at the time. I worked there for three seasons, 2015-2017. I was on the grounds crew. I was the guy raking the dirt, trimming the ivy. It was fun, because you had to be very professional in that situation, because you’re working with all the players and the coaching staff. You have to make sure everything you do is professional-level perfection. Being in the dugout with players and getting to talk to them was a really cool experience.

Do you have any fun stories of time spent with the players?

In 2015 when the Cubs were making their first playoff push, one thing they would do after a series win, every now and then they would invite the grounds crew into the clubhouse to have a post-game celebration dance party. And I was lucky enough to be working for them when they won the World Series and I got a World Series ring.

You went on to apply to the Digital Media and Storytelling (DMST) Program at the SOC, correct? What would you say was the most challenging aspect of that experience?

Because I was in the business school for my undergrad, I didn’t have a lot of hands-on experience that my peers had when entering the program. Getting into video was a completely new experience for me. I had never used a film camera before. I thought that skillset would be helpful no matter where I ended up, career-wise. I had to put a lot of work in. I was in classes where I wasn’t super comfortable with the material. I had to change my work habits to adjust to it.

Probably the most difficult thing was that halfway through the semester, I started working 50 or more hours at a restaurant, so I had to switch to being a part-time student, which delayed my graduation. I did a lot of my school work late at night.

What was the most rewarding part of your time in the DMST Program?

I loved all the professors I had. If I needed to reach out for help, they were there for me. They were nice, but they were always pushing me. Always telling me ways I could keep getting better and better at the work that I was producing. Despite how much work it was, I enjoyed the work that I was doing, so it didn’t really feel too much like work. I was really proud of my capstone project that I did. I built a website to go along with a podcast that I did with one of my friends. We went out and interviewed a variety of bartenders in Chicago and talked about their experiences behind the bar. That was one project I really enjoyed.

I also did a visual piece for a directed study with Professor Richelle Rogers. I created a webpage describing the National Independent Venue Association and their efforts to get federal funding to stay open or re-open if they had closed because of the pandemic. So many venues still had to pay their rent and keep the lights on, even though shows were cancelled due to the pandemic. I know a couple venues in Chicago got about one million dollars this past year, which went to employees and to be able to pay bands when they start coming through again.

Can you tell me about what you do as the Technology Coordinator for the SOC?

Starting last semester, most students have some experience with the basic cameras we have in the lab. I have seen more students who do whole projects on just their smart phones, though. They’ll come in for a tripod, or a lavalier microphone for their smartphones. With how good phone cameras are now, you don’t necessarily need a big camera. You can carry one around in your pocket.

What do you think was the biggest thing you had to adapt to when you started your job at the SOC?

The biggest thing was working with the web checkout system that the OWL Lab uses. Knowing the back end of that and how to build specific authorizations for equipment, or making sure a student is given the proper equipment to check out based on their coursework. But one of my advantages was having been a student in the SOC before, so I already had a good sense of the check-out process in the OWL Lab because I had used it for my own courses. It was kind of like learning to ride a bike again.

Are there any aspects of the OWL Lab that might surprise people to learn?

A lot of students come in and use the same equipment over and over again, not wanting to ask about new things they’ve never used before. I’ve never had a student say, “I’ve never used this, can I be trained on this to learn how to use it?” The OWL Lab student workers are all knowledgeable and could show other students how to use different equipment. People can feel free to ask questions. We don’t bite down here!

What advice do you have for current students at the SOC who hope to follow your same academic or career path?

I would say, don’t, because it’s not a path, it’s a spider web! I would say, always keep an open mind to new experiences. If it’s something you feel excited about, that you can see yourself doing for a number of years, I would say go for it. But don’t put pressure on yourself to stay on the exact same path your whole life. I did marketing for a while, and felt pressure to get a job that lined up with what I studied in school. But I didn’t enjoy it as much. I talked to other people who took a different path than what they pursued in school, and it worked out well for them. Mainly, if it’s something you like to do, just follow that.