A new take on children’s books 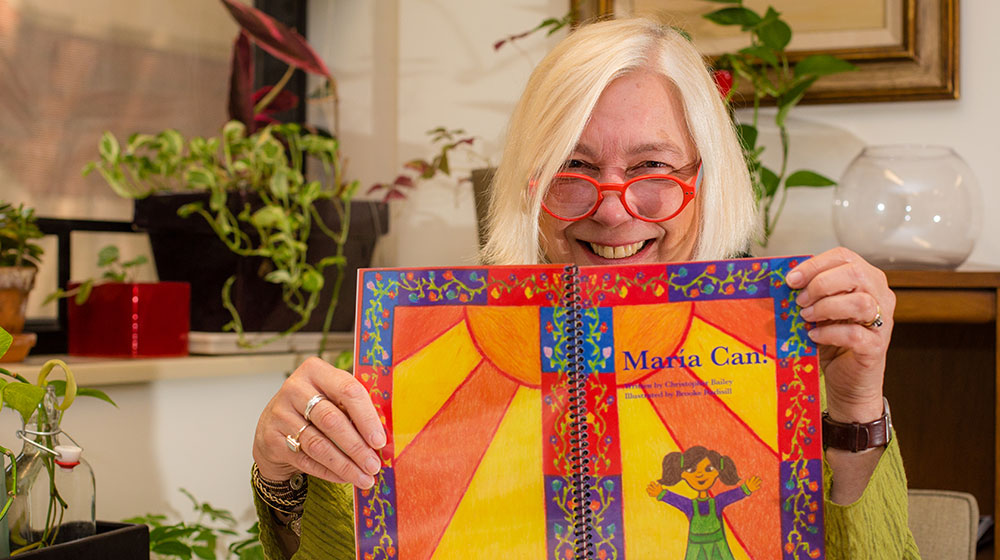 Loyola professor Bren Murphy, PhD, poses with one of the children’s books that her students created in her Community as Story class. “We’re trying to use this class to look at the power of storytelling in communities to say what’s normal and what isn’t—because that’s what books do,” she said. (Photo: Natalie Battaglia)

Loyola professor Bren Murphy, PhD, believes we all can learn something from children’s books.

Murphy, who holds a joint appointment in the School of Communication and the College of Arts & Sciences, teaches an undergraduate course called Community as Story. In the class, students explore gender and diversity—or lack thereof—in children’s picture books. It’s a unique way, Murphy said, to study urban communities and the individual identities found there.

“Little kids read the same stories over and over again,” she said. “They either see a mirror or a window to another world—maybe a world in which they don’t appear. They’re reading a book and looking at the pictures feeling like they don’t belong, or they’re seeing themselves in the images.”

By studying how text and pictures influence and enhance each other, Murphy and her students hope to show others that children’s books are more than just breezy reads.

“We’re trying to use this class to look at the power of storytelling in communities to say what’s normal and what isn’t—because that’s what books do,” she said.

As part of the class, students also work with school children and nonprofit groups to gain insights so they can write and illustrate their own picture books—which can be an eye-opening experience.

“We’ve had a story about a little Muslim girl who wears a hijab and is afraid to go to school because she looks different than the other kids,” Murphy said. “It’s such a simple story, but it’s never been told through this platform before.”

A fixture at the University

In the 32 years she’s been at Loyola, Murphy has done a little bit of everything.

She’s been chair of the Department of Communication, associate dean of the College of Arts & Sciences, and director of the Women’s Studies program. She’s taught courses ranging from public speaking to the history of feminist thought. She’s even produced an award-winning documentary about nuns in popular culture.

And now, in addition to her research on children’s picture books, she’s working on two other projects.

“I have a lot going on right now,” Murphy said, “and they’re all at various stages of development.”

One of Murphy’s current projects combines her love for film with her research into children’s gender role development. She’s working with her students to create a website that people can search to find positive movies for children to see.

“Unless you’re an expert, parents and teachers tend to show children the films that they loved as kids, or things that are currently being promoted,” she said. “We’re trying to expand the exposure for older classics that still hold high educational value.”

Movies on the still-to-be-developed website include a hodge-podge of films, both old and new, that vary greatly from genre to genre. The team has included present-day features such as Up (2009) and Charlie and the Chocolate Factory (2005) as well as older films such as Yankee Doodle Dandy (1942) and Young Mister Lincoln (1939).

“Many of the movies on our list aren’t even made specifically for children; some don’t even represent our criteria of the inclusion of racial and ethnic diversity,” Murphy said. “Wizard of Oz doesn’t challenge gender roles except for making Dorothy the main character, yet the movie and music are still very well done so it made the list.”

Murphy is also working on her third film, focusing on the influence of American culture on Catholicism, and vice versa.

“I’m working with the same videographer and editor from my last documentary,” Murphy said. “We’re in the very beginning stages, but we want to do a multi-part series on what it means to be Catholic and American.”

The film will explore the contributions and tensions that the world-wide religion and the unique political society have created for one another, and it will be filmed in multiple cities across the United States. “I’m really excited about this one,” Murphy said.

Though all her projects are ongoing, Murphy praised her students as a big reason for her continued progress.

“The student involvement in both the book and film projects is just invaluable,” she said. “They have to use their experience and research skills to help come up with stories that are relevant. It wouldn’t even be a possibility without them.”