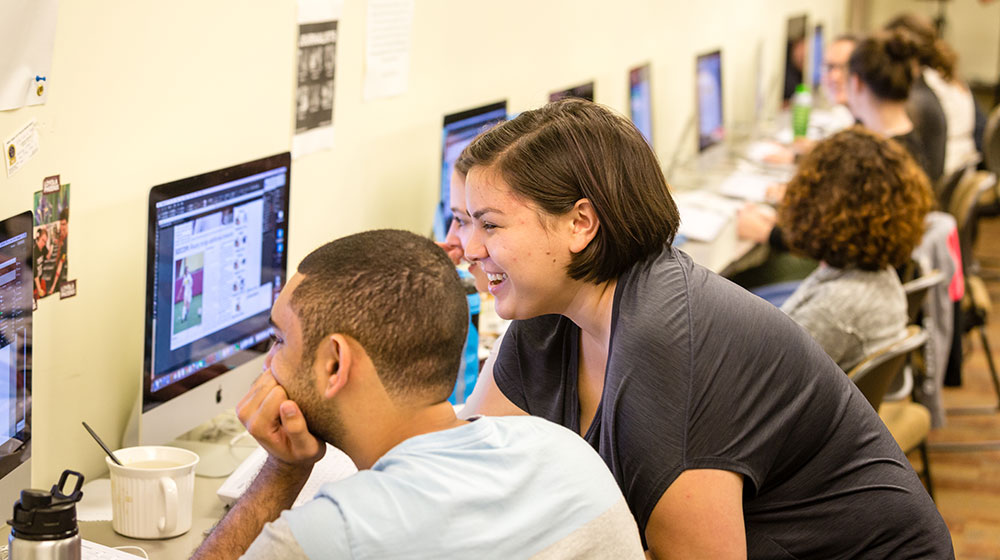 Marissa Boulanger (right), editor-in-chief of the Phoenix, helps direct production for an issue of the student-run newspaper. “I hope people understand that we won this award and we are very proud of it,” she said. “But we are even more proud that we are at a university that allows us to do that.” (Photo: Mark Patton)

The Loyola Phoenix is on a winning streak.

For the second time in six years, the Society of Professional Journalists has named the Phoenix the best non-daily student newspaper in the country. This year’s award was presented September 19 at the society’s Excellence in Journalism 2015 conference in Orlando, Florida.

“To me it’s kind of like winning a national championship,” said Don Heider, dean of the School of Communication. “It doesn’t get the splash that the volleyball team gets, but it has the same level of prestige. It says our students are excellent. They have been judged by their peers and by professionals as excellent, and they deserve recognition.”

Recent graduate Esther Castillejo, who was editor-in-chief of the Phoenix last year, said she always encouraged her staff to put out a professional newspaper—and not a college newspaper.

“It is not an easy feat to produce something that a national organization thinks is top notch. It’s the best in the country,” said Castillejo, now a production fellow at ABC News in New York City. “The award is a validation of our work and proves that we want to position ourselves as a newspaper that is of service to the student body, that is representative of Loyola, but also critical of Loyola.”

The importance of independence

Heider said he supports the Phoenix as an entity that operates as a free press and not as a public relations arm of the University.

“The paper is for students to express concerns, cover stories, to give students a voice, and to hold the University accountable,” Heider said. “It’s not always a happy or comfortable situation, but that’s what good journalism is—it’s challenging.”

Bob Herguth, the faculty advisor, said students working for the Phoenix gain experience that they will never find in the classroom.

“The Phoenix provides front-line, real-life experience,” said Herguth, an adjunct professor at Loyola and director of investigations at the Better Government Association. “They learn about camaraderie, the mechanics of making a newspaper, understanding a media organization, and how advertising works. It’s the full package.”

Castillejo said her experience at the Phoenix helped her develop an editorial vision and an eye for news. More importantly, she said, it propelled her to where she is today. While at the Phoenix, Castillejo was the face of the newspaper, but she also made it a point to mentor the younger writers on staff.

“It was important to me that our entire staff learned something, that it wouldn’t just be a line on their resume,” Castillejo said.

A mark of excellence

Liz Greiwe, another recent Loyola graduate, won the SPJ’s Mark of Excellence Award in 2015 for her feature story on homelessness in Chicago.

“I did not win this award alone,” said Greiwe, now the editorial board coordinator for the Chicago Tribune. “It took copy editors, managing editors, and an editor-in-chief to get the piece ready. I really appreciate the help and the support I got when making this, even more so than the actual award I received.”

“I can say the Phoenix has experienced tremendous support from on high,” Heider said. “When you have that kind of support, students don’t know about it. It’s invisible.”

This year’s editor-in-chief, Marissa Boulanger, decided to attend Loyola because of its strong journalism program.

“I hope people understand that we won this award and we are very proud of it,” Boulanger said. “But we are even more proud that we are at a university that allows us to do that.”

Though the Phoenix team is proud of its accomplishments, everyone involved with the newspaper said that good journalism is not about receiving awards.

“My philosophy is that you don’t work for an award, you work to do the job,” said Herguth, the faculty advisor. “Do it as best you can, with fairness and accuracy.”

While serving as the leader of the Phoenix, Castillejo said she tried to build a collaborative environment and a family culture. She said she’ll always have fond memories with her friends on the news team, even if they were made at 1 a.m. while scrambling to make deadline.