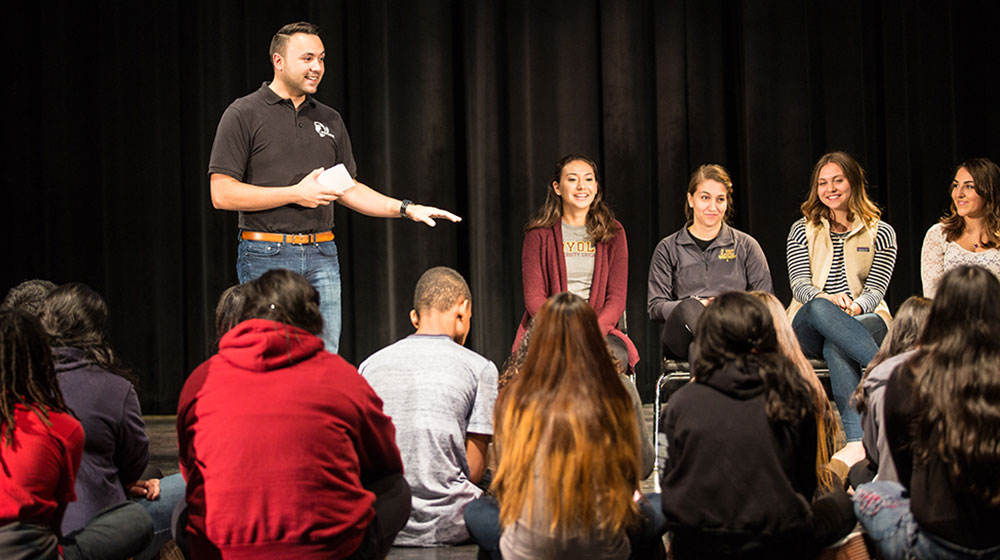 In 2006, Everett Gutierrez graduated with the first advertising and public relations degree from Loyola. Nine years later, he is the founding president of his own nonprofit and is still living out the Jesuit ideal of being a person for others.

It all started after Gutierrez realized that, for him, the corporate world was not enough.

“As I continued to grow in my career, I saw that in a for-profit arena you can help people, but you are always looking at the bottom line, which is usually a dollar amount” Gutierrez said. “In the nonprofit industry when you are helping people, that’s your bottom line, and that’s what I wanted to work with moving forward.”

So Gutierrez created Legacy Leaders International, which helps mobilize and motivate people to become leaders for the common good.

“I saw that there were organizations that were doing leadership training and offering similar services,” he said, “but there was a difference in our approach.”

Gutierrez began by re-entering the community where he grew up on the northwest side of Chicago and offering leadership training to residents who did not have the resources or experiences to stay competitive in their careers. His group has since expanded its reach and now works in other countries as well.

In the spirit of giving back, Gutierrez returns to Loyola almost every year to offer his expertise to students in the School of Communication. This year, he is partnering with associate professor Patricia Felkins’s public service communication class (COMM 320) to offer students tangible campaign-building experience.

A team of four students—the self-named Legacy Ladies—is working with Legacy Leaders to create a public relations plan and campaign for Networking for Change, an event that allows students at North-Grand High School to develop their professional networking skills.

Ana Lucia Bustamante-Martinez, a junior advertising and public relations major and leader of the Legacy Ladies, is excited about organizing the event. She and three classmates visited the high school in late October to talk about their college experience—and more importantly, to get the students interested in furthering their education.

“It’s great that we all get to come together for an organization to help them further their mission and vision,” Bustamante-Martinez said. “We were already passionate about nonprofits, which is what attracted most of us to the class. We’re really trying to leave a mark.”

The students and Legacy Leaders International each have something to gain from the partnership.

“I hope that the Loyola students get the opportunity to be involved and engaged in a mission that’s beyond themselves,” Gutierrez said. “Whatever they bring to this organization and to this event, it’s going to create a ripple effect of changes.”

As a Loyola alum, Gutierrez couldn’t be happier to come back to the University to meet students and work with faculty who used to teach him. Felkins is one such faculty member who left a lasting impression on Gutierrez when he was the first student navigating the advertising and public relations major.

“She was one of my biggest advocates,” Gutierrez said of Felkins. “She went above and beyond to mentor me through the process of choosing a career.”

The relationship between former student and professor has grown over the years into one between two partners and friends.

“Everett leads with great energy, integrity and commitment to empowering young people to make a positive contribution to their community,” Felkins said.

While Gutierrez has big plans for Legacy Leaders International—which includes expanding its services into Kenya—he still plans on returning to the University to share his experiences with students.

In fact, Gutierrez dreams of one day teaching at Loyola, continuing to serve the school that served him so well.