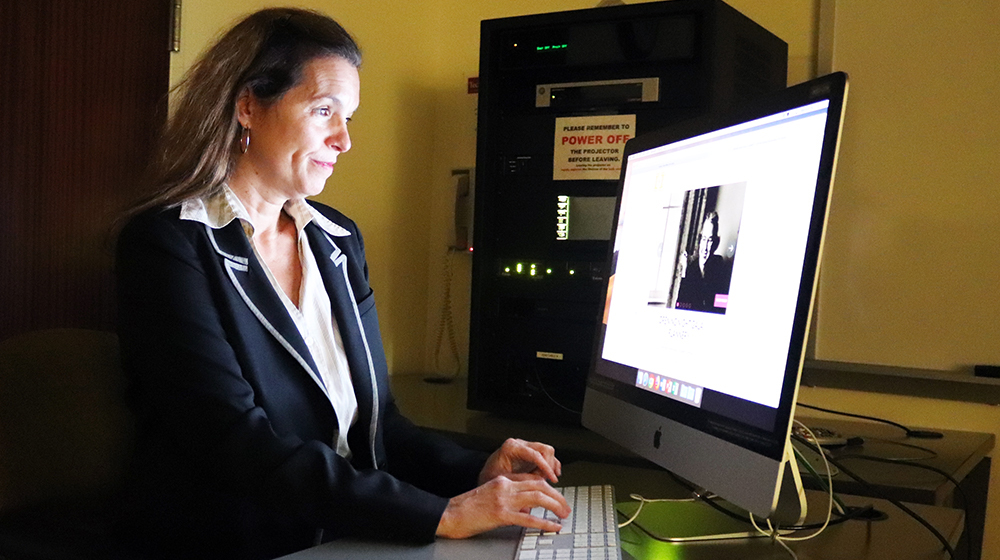 Flannery, a film about the life and works of O’Connor, was chosen for first-place out of 80 different film submissions. The award will be granted annually to “a filmmaker whose documentary uses original research and compelling narrative to tell stories that touch on some aspect of American history,” according to the release.

“This wonderful award supports filmmakers who seek creative ways for listening to U.S. history with all of our 'freaks' and prophets, our serial killers and our saints – to paraphrase Flannery O’Connor – and will help to revive the hilarious, transcendent talent of writers who exist just outside the mainstream,” Coffman said.

Coffman said the project was a team effort initiated in 2011 by producer, co-writer and co-director the Rev. Mark Bosco, S.J.

“It is such a great honor to receive this award, as it highlights Flannery O’Connor’s unique place in American literature,” said Bosco, a Jesuit priest and former Loyola faculty member.

“Flannery is an extraordinary documentary that allows us to follow the creative process of one of our country’s greatest writers,” Ken Burns said. “It also provides us a glimpse into her life, including her Catholic faith, her unusual sensitivity to race as a Southern white woman, and her daily struggles with illness and the prospect and reality of an early mortality.”

“Ken Burns and I were in immediate agreement,” said Dr. Carla Hayden, the Librarian of Congress. “The film is a beautiful and thoughtful reflection about the power of words and contemplation as well as the satisfaction that comes from a commitment to art and craft.”

Flannery will also be screened during the New Orleans Film Festival as part of the Documentary Features Competition on Oct. 21-22 and is expected to be shown at several other film festivals this year.

The film was created through support from the National Endowment for the Humanities (NEH), the Mary Flannery O’Connor trust, Emory University and Georgia College and State University, according to the film’s website.

O’Connor was born in 1920s Georgia to a Catholic family. She wrote short stories, novels and essays regarding racism, classicism, religion, disabilities and crime. Her works are often categorized as grotesque or as questioning morality and ethics.

Her writings include the novel Wise Blood and a short story collection titled A Good Man is Hard to Find.

Flannery was screened at Loyola’s Damen Student Center on September 18 as part of the Catholic Imagination Conference. After the screening, film critic Jonathan Rosenbaum shared his thoughts on the movie.

“This is the challenge faced by Flannery: in using creative images with writing without permitting those images to compete with or detract from the writing; a formidable challenge and one that is met with varying degrees of success in each case but with a great deal of ingenuity and creativity,” Rosenbaum said. “At least it arguably gives the prose an opportunity to breathe inside a cinematic space which is already to my mind a rare achievement.”